The domestic environment of Studio AGENdA

In Medellín, the “tropical architecture” of Camilo Restrepo Ochoa begins in a former domestic space, which is open to nature and accommodates his compact team. 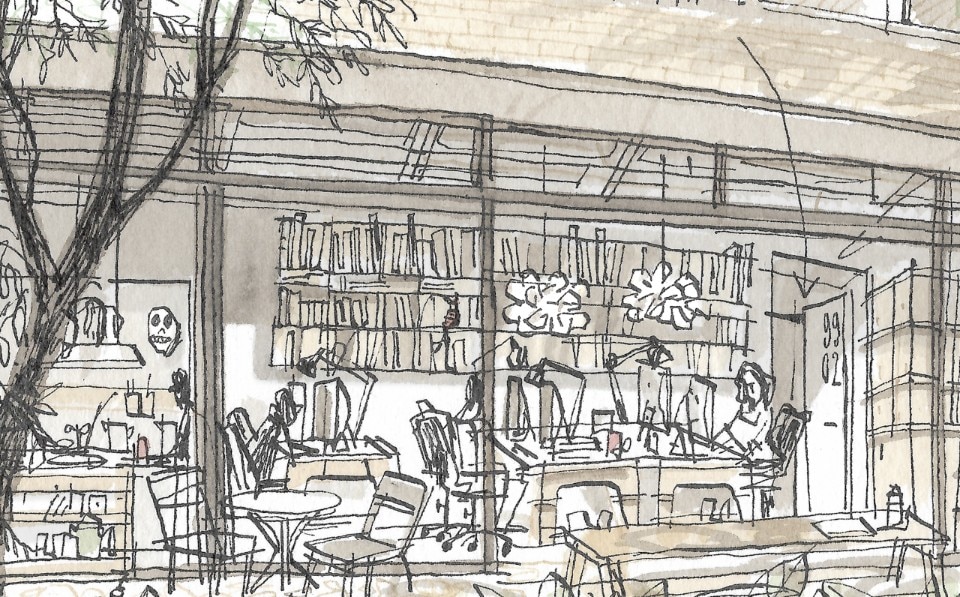 A former domestic space converted into an office, the studio of Camilo Restrepo Ochoa (Medellín, Colombia, 1974), called AGENdA, is firmly embedded in Medellín’s tropical climate. The small number of personnel – three architects plus Camilo and his wife, who oversees the administrative aspects – ensures a streamlined and efficient organisation of the work. The day-to-day operations of the practice are carried out in a single room, around a kitchen available to the staff and in some way identified with the hearth and home. Meals are cooked and eaten together, establishing a deep intellectual and empathic bond between the members of the team.

The sharing of ideas, experiences and studies crosses the boundaries between private and professional life. Restrepo Ochoa set about opening his own office in 2010 after working with his father, Juan Paul, who had been in business since the early 1970s. The crisis that ravaged the whole Colombian economy in the mid-1990s left its mark on Camilo’s formation. Driven by necessity, he emigrated to Maastricht in the Netherlands. On his return, the idea of a sustainable and compact production model laid the foundations for AGENdA. From the start, the studio involved a small but virtuous core of architects capable of completing ambitious projects such as the Orquideorama (Orchid House, 2006), the canopy in the Medellín Botanical Garden, or the admirable Señor de Tula shrine in Jojutla, Morelos, Mexico (completed in 2020).

This ideal management process stems from the careful planning of everyday activities. The mornings are mainly devoted to admin and organisation, while the afternoons are spent designing and developing projects. Even the days of the week are divided up by careful time management. The work is organised on Mondays, checks are carried out on Wednesdays, and Fridays are used to plan the following week. Tuesdays and Thursdays are entirely dedicated to production. Restrepo Ochoa alternates his architectural design work with teaching semesters at the Harvard Graduate School of Design.

His optimal synergy with the firm’s established staff makes for straightforward management of architectural projects carried forward at a distance. A consolidated protocol of video calls and cloud services, which would have been almost unprecedented a few years ago, prepared the team for the current conditions imposed by the pandemic. At the same time, his method is scarcely suited to the involvement of interns, as the studio is governed by a highly pragmatic approach to building, in which there is little space for training staff who lack hands-on experience. Switching between practice and teaching has enabled Restrepo Ochoa not only to explore academic and theoretical issues, but to be self-critical about his own work since his earliest times at the GSD. He sees it as “a fantastic way to become engaged in a broader conversation”.