The Stacked House by Studio Lotus in New Delhi 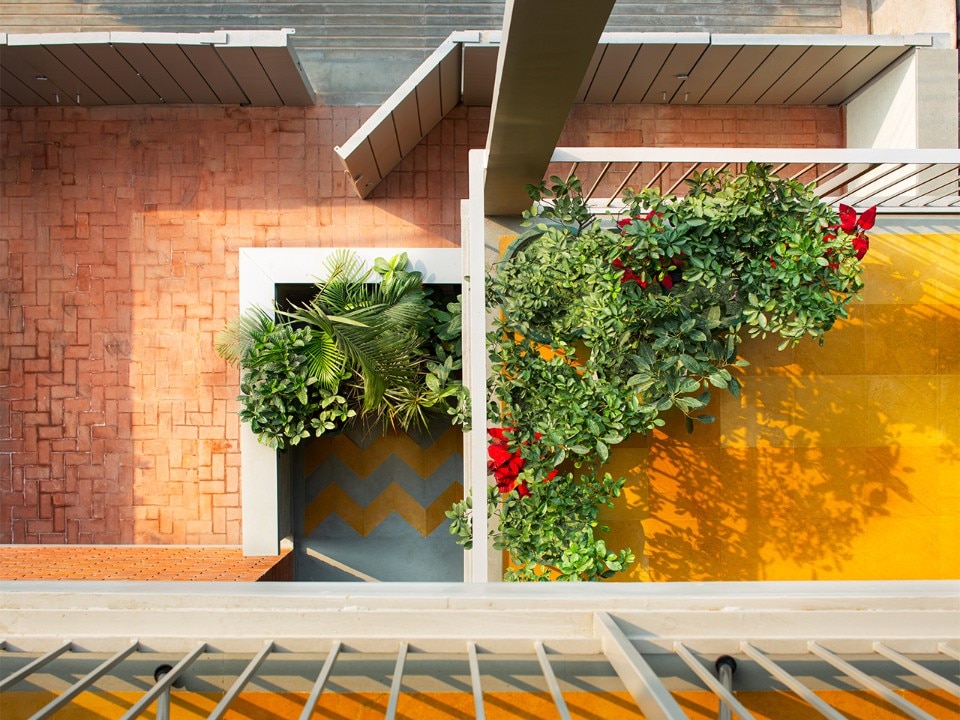 Natural light, ventilation, interconnection and privacy inform the design of this house by Studio Lotus in a dense area of the Panchsheel Enclave in New Delhi. Situated on a small 200 sqm lot open on one side, the house consists of two interconnected apartments for an extended family of six.

The west-facing plot is 9 x 24 meters deep and is enclosed by buildings on three sides, with the narrowest 9m face opening to an 8m wide access road. The challenge was to create an airy building that would remain naturally lit, with all rooms cross-ventilated during the day, despite the restrictive site conditions. There was also the desire to create a strong visual connection between the different units to maintain a link between the family units. Hence the design of a series of vertically stacked volumes: four floors organised with two staggered duplexes around a central courtyard and a small rear courtyard, staggered in section, allowing light and ventilation into the lower floors.

View from the street.

One of the corridors.

A verandah.
Photo © Noughts and Crosses

View of the wooden stairs.
Photo © Noughts and Crosses

The west facade facing the street, the staggered central courtyard and the third courtyard placed diagonally form the three vertical spines around which the rooms are placed. This facade includes the living rooms and main bedrooms of the two units, opening through the courtyard into the rear volume, which houses the dining room and kitchen on the lower floors and the bedrooms on the upper floors respectively. Balconies and walkways connect these living spaces, creating a staggered floor plan that articulates the inner courtyard.

The main central courtyard is designed as a clear, triple-height wall that acts as a reflector for southern light into the interior spaces, which are staggered around it. The courtyard is flanked by verandas where the different family units can chat, as in an old-fashioned aangan. To further encourage ventilation and the diffusion of natural light into the living spaces, the linear stairwell connecting all the floors was placed along the south façade, which receives the lowest levels of lighting, and a small sky-lit courtyard was created in the southeast corner of the site.
The view of the tree-lined street allowed the external glazing to be designed in accordance with the internal division: the north-west façade has a glazed surface, while the south-west one has exposed brickwork.

To maximise heights within this confined space, structural engineer BL Manjunath devised an innovative hybrid structural system, which comprises a modular metal grid of beams and columns with concrete slabs poured into the frame, accommodating the beams in the slab. This maximises heights, creates unobstructed views and exposes the structural system. The design employs a palette of earthy materials: white plastered walls, exposed metalwork and white terrazzo floors populate this envelope.