Observation of the physical form of Indian cities is the tool employed by Mehrotra to exemplify the clash between two opposing political rhetorics: constructing a global city or one that is equitable and sustainable. 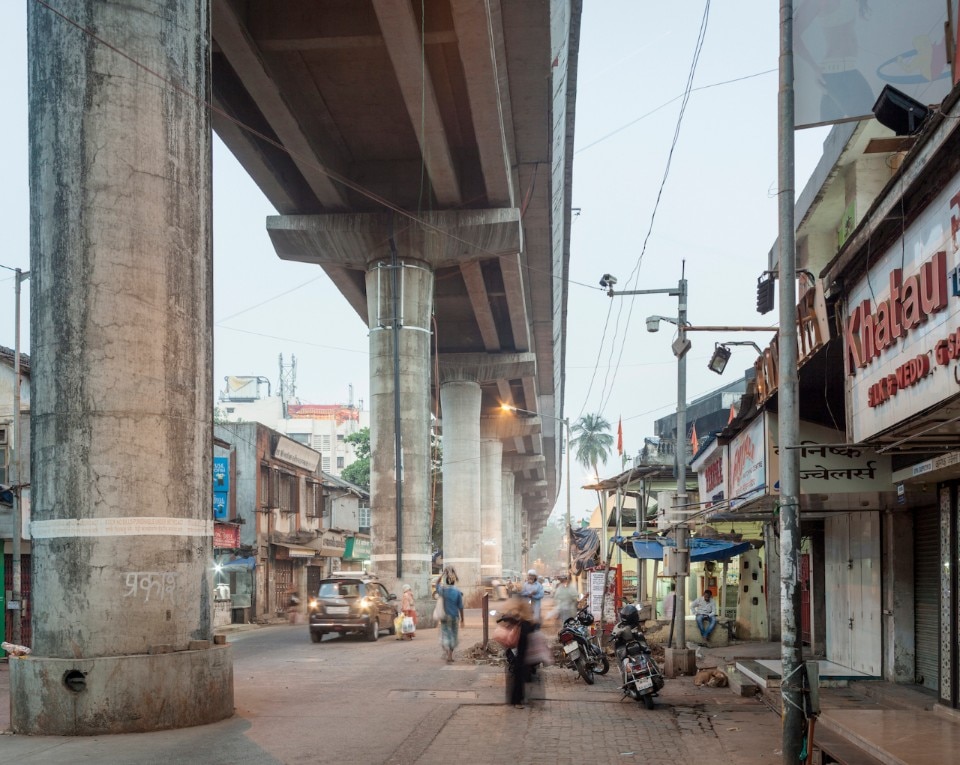 This article was originally published in Domus 1054, February 2021.

The contemporary urban condition in India symbolises the two simultaneous transitions at play on the political landscape – moving out of socialism and into capitalism, or from state-controlled imaginations of the city to a free-market production of the built environment. In the occurrence of transitions, which are often at play for decades in India, the built environment is naturally a muddle and the fallout from each condition finds expression in the physical form of the Indian city. Ruptures in the fabric and startlingly bizarre adjacencies characterise the city which evolves with these narratives colliding in urban space. The two narratives, or the political rhetoric, then counterposed against each other are of “building a global city”(in other words, pandering to the impatience of global capital) and developing a city premised on nurturing a civil society that is equitable in terms of access to amenities. Clearly, the former is propelled by impatient capital and articulated as an aspiration by private interests, such as multinational corporations, developers and increasingly the Indian State itself! The latter voice emanates from civil society – the academy, the non-government sector, foundations, institutions, labour unions and all other formations where “capital” acquires patience so as to reside and grow in more inclusive ways.

The physical paraphernalia of these opposing city aspirations is also dramatically different. In the former case, the ground has to be prepared to allow capital to land softly and securely. This results in the deployment of a standard tool kit: airports, freeways, five-star hotels, convention centres and subway or elevated rail systems followed by the preservation of historic buildings (to assert a local identity) and a general clean-up of the streetscape. In this configuration the rich retreat into gated communities both in the form of vertical inner-city towers and sprawling suburban compounds on the peripheries. In reality, in both cases they withdraw from the city and the nitty gritty of its everyday life. The architecture that results from this attitude often displays a complete detachment from its surrounding environment as well as from the place and community in which it sits.

Furthermore, its tectonic quality and materiality is most often unmindful of local resources and building traditions. Such architectural production is usually a quick response to the demand for the large-scale infrastructure projects (e.g. upper-income housing, hospitals, schools, colleges and commercial development) that allow private participation in otherwise largely government-controlled sectors. Most importantly, this form of global architecture thrives on its perceived ability to provide predictable and stable services for impatient capital, searching for a host terrain in which to invest and quickly realise its value. At the same time, the other emerging landscape in India is one that is evolving naturally in a vacuum, the result of a retreating state.

This is a city that has ensued from the state relinquishing the responsibility for projecting an “idea of India” through the built or physical environment. Today, the major state-directed projects are highways, flyovers, airports, telecommunications networks and electricity grids that connect urban territories but they do not help determine or guide their physical structure as masterplans did in the state-directed (Socialist) economy. At the very least, the masterplans sought to create entitlement to housing and proximity to employment. Instead, the “everyday” space has become the place where the economic and cultural struggles of the majority are manifested and the physical shape it adopts is that of a bazaar or informal city! These are the landscapes of the self-help settlements – often referred to as slums – or the peripheries of cities that grow outside the formal state-controlled urban limit. Similarly, the 400-plus small towns in India expected to become cities of close to one million people (and maybe more) in the next two or three decades are actively producing forms of urbanism outside the mainstream discussion on architecture or urban planning.

This emerging landscape is the image of the Indian urban condition. The processions, weddings, festivals, hawkers, street vendors and slum dwellers all create an ever-transforming streetscape – a city in constant motion where its very physical fabric is characterised by the kinetic elements. This city is not dependent on architecture for its representation. In this “kinetic urbanism”, architecture is not the only “spectacle” upon which society relies to express its aspirations nor does it even comprise the single dominant image of most Indian cities. Quite the opposite, with festivals such as Diwali, Dussehra, Navratri, Muharram, Durga Puja, Ganesh Chaturthi and many more having emerged as the visual and representational spectacles of contemporary India. Their presence on the everyday landscape pervades and dominates the popular visual culture of India’s cities and towns.

Set against this imagination is a new landscape of global derivatives or the images of globalisation. It is an irony – that of the collusion of consciously dysfunctional land markets and exclusionary design and planning at multiple scales that has created this strongly contested fabric of contemporary urban India. Interestingly, in this condition both the rich and poor communities have managed not just to survive but to thrive! However, this reality is constantly challenged by the world-class city idea and slum-free city imagination. The government and financial institutions often drive this via a poorly informed appreciation of Singapore, Dubai and Shanghai – the havens of impatient capital set on autocratic political landscapes: cities where “humans” and especially the poor are not even considered in the imagination of the physical setup they will inhabit. In a democracy, citizens must be placed at the centre of any imagination of the city.

A humane and sustainable city must necessarily be premised on access to a basic infrastructure and patterns of mobility that will determine how the city grows and how people have equitable access to these amenities. In democracies, cities must be judged by how they treat their poor. It is really the choice between these two directions – or attitudes to city building – that will be central to the discussion on the future of urban India: a choice between constructing equitable cities or being bullied by impatient capital.

Read also: Cities, increasingly global in the future, are the solution to the pandemic

Rahul Mehrotra (New Delhi, 1959) is the founder/ principal of RMA Architects. He divides his time between working in Mumbai and Boston and teaching at the Graduate School of Design at Harvard University where he is the Chair of the Urban Planning and Design Department and the John T. Dunlop Professor in Housing and Urbanization. His most recent book is Working in Mumbai (2020), a reflection on his practice as an architect and urbanist, evolved via association with the city of Bombay/Mumbai.