The largest airport in the world? The Daxing International Airport in Beijing

The infrastructure designed by Zaha Hadid Architects in Beijing is a masterpiece featuring elegant curves and sustainable engineering solutions. 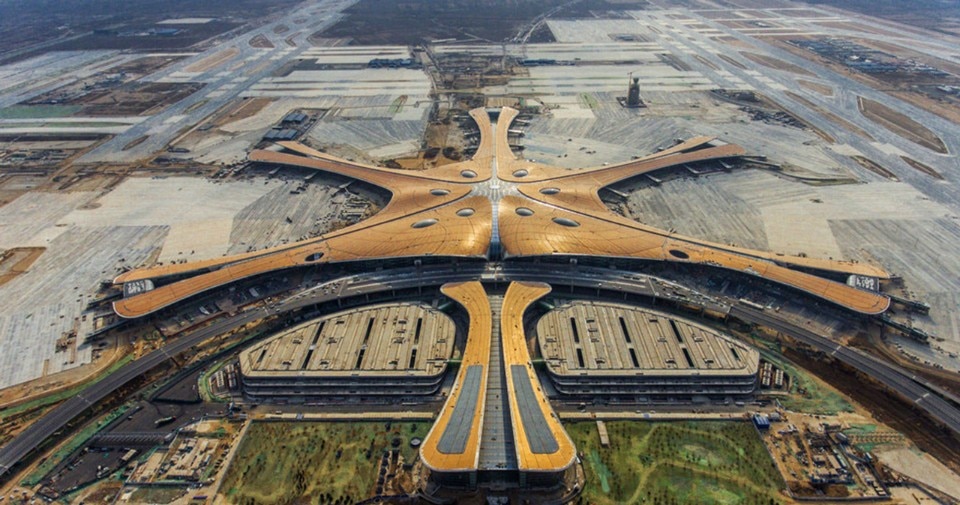 The Daxing International Airport in Beijing is the new masterpiece by Zaha Hadid Architects and is already the largest airport in the world. Will soon become also the busiest airport in the world, overtaking the Hartsfield-Jackson in Atlanta. The 700,000 m2 terminal will serve 45 million passengers a year, reaching 72 million by 2025 and exceeding 100 million thanks to the planned expansions.

Over the next 20 years, commercial passenger traffic in the Pacific region of Asia is expected to increase by 1.8 billion, the same amount as the rest of the world as a whole. The location of the Daxing Airport was selected after an in-depth analysis. With a distance of 46 km from Tiananmen Square, 67 km from Beijing International Airport and 26 km from Langfang City Centre, it aspires to become the region's main airport hub.

The building was constructed incredibly quickly: the idea of having a second airport for Beijing was proposed in 2008, while official approval for construction by the National Commission for Development and Reform took place on 22 December 2014. It has been functioning since 25 September 2019, just in time for the celebrations of 1 October, which mark the 70th anniversary of the founding of the People's Republic of China.

The construction of the mega airport has cost a tremendous amount (but not surprisingly). It is estimated that the Chinese government has paid about $17.47 billion for this colossal project.

The main feature of the project is its star-shaped roof, which with its flowing forms reaches the ground to support the structure and bring light inside, directing passengers to the central courtyard. The structural spans are up to 100 m, generating large, free and flexible public spaces.

The radial configuration of the airport makes it extremely efficient for passengers to travel from check in to the farthest boarding gate in just eight minutes. 79 airbridges connect directly to the terminal, which can handle passengers of six A380 aircraft at the same time.

Integrated with the terminal is also a railway hub of about 80,000 square meters, which connects the airport to the national network and allows you to reach the center of the Chinese capital in just 20 minutes.

Daxing International Airport also introduces numerous engineering solutions that make it energy efficient and reduce the landscape impact of the infrastructure. Photovoltaic panels are installed all over the roof to provide a minimum capacity of 10MW.

Finally, it is equipped with a central heating system capable of recovering waste heat and a rainwater collection system that pours excess water into wetlands, lakes and waterways, to counteract unwanted effects on the local microclimate.

The architecture by ZHA also challenges some illustrious infrastructures such as Madrid Barajas, designed by Foster + Partners, Shenzhen-Bao'an airport by Massimiliano and Doriana Fuksas, or the terminal designed by Eero Saarinen at JFK International Airport in New York.