Didier Fiúza Faustino: “My work is that of introducing doubt in space”

Inspired by the feeling of a déja-vu, Didier Faustino just delivered his first interior design bar in Ghent: a project about seduction and corporality. 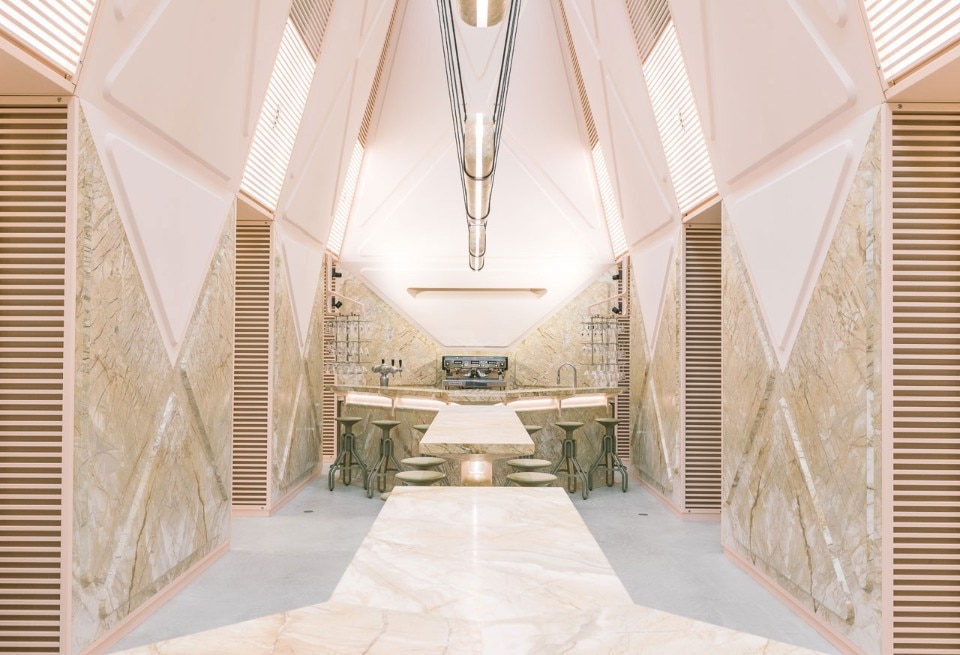 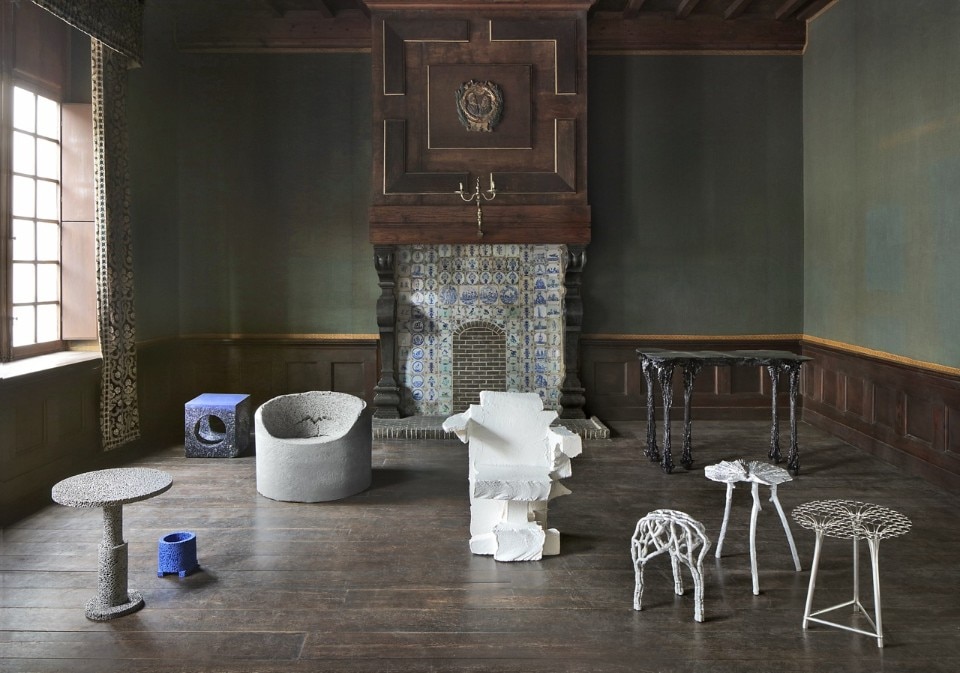 We had a conversation with the French-Portuguese artist and architect, who accompained us through his newly completed project. Commissioned by Zebrastraat, a cultural center in the heart of Ghent, he was given free hand to redesign the center’s bar and lounge spaces. The outcome looks as if a spaceship has landed in Belgium. “I like this idea of retrofuturism, or maybe more a kind of a fantasy-future”, Didier Faustino explains. “I like to imagine a space with no age: this place looks as if there is some reference, but it could be also classical, past but not future, future but not past”.

Sign up for our newsletter and get domus in your inbox
XYZ lounge project, Zebrastraat cultural center, Ghent
01 / 12
Share
Pin it

Seems like a natural continuation of your previous project for Hermès, Cosmogonie.
That’s funny because I wasn’t working on this kind of topics: bringing an “atmosphere” inside of a building was not my interest. And then, both Hermés and Zebrastraat put me this situation. So I had to think not to reproduce an existing atmosphere but bringing something more emotional, that dealt with the way people emotionally interact. Not so easy. In the imagerie I thought of mental resilience, when your brain is a bit tired and you have this feeling of déjà-vu, this feeling of familiarity. The transmission of the information is delayed of a nano second, so you have the tipical feeling of having seen something already: it’s just a disfunctional moment in your brain. I like making something familiar, something proche but at the same time unexpected. Something emotionally desirable. Something between a dream of a spaceship, a dream of escaping, a dream of a mechanical body.

Something post-human?
There is the fantasy of how our bodies will be. For example, the texture here, the light pink, speaks about derm. How can I work on this notion of derm of in space and time? It’s not a perfect, surgical derm: that’s why I used marble, more aged in time. Architecture for me, or space, needs to have an ambiguity, needs to have the potential to question use and beheavior. My work is that of introducing doubt in space. Doubt takes us to a situation where unexpected things can happen. If you doubt you are alive! With the furniture you have something a bit sensuelle, érotique, corporelle.

This is your first interior design bar. Tell us more about the furniture.
We modified a bit the architecture, in a very short time: we looked for more intimacy. We rebuilt the entrance and the bar, in a way that people could see the Panamarenko sculpture, hanging from the ceiling. On the upper floor, people going out of the lecture rooms had a more cozy place to sit in, little niches with plants.

I designed a plastic chair that first was a prototype and then we produced it together with the client. It’s called the Delete yourself chair and it took three months of study to make it, super challenging in terms of engineering. The basic concept was to create one mold for two different shapes: one squared, one curved. They are then super light and easy to move, creating a continuous interior landscape. Then there are curved walls and Y-shaped tables made of a mixed material of aluminium covered with a 3mm layer of Carrara marble easy to carry and assemble. The ambient stretches between light pink, natural stone, green.

We sort of live in a ‘pink era’. Why pink?
We were discussing it a lot in the studio. First of all I had to balance the colours, and the complementary of kaki and olive green was bright pink. We live in the era of pink? I have no answer about that, it’s about the atmosphere of the period, I guess. In the last two centuries pink has been associated with femininity, but if you look at its origins, it was a men colour. Maybe it has to deal with the interpretation of this notion. I love the pink, the kaki, the dark that leads to a momentum of sublime: it’s the same as for gold. It’s a liberation of the code. Vraiment, I love poudre, old colours, derm colours. In our studio is part of our DNA, together with glossy black.

Can design force a change in the cultural planning of a place?
Yes, if you plan it carefully. When I received this commission I was asked to do something to change the environment, which envolves the way people work here, the notion of the bar that becomes a meeting place. That’s what we’re working on now: space, furniture, and manipulation of the behaviour. That’s what interests me in architecture: a tool to generate new situations, and maybe the colour is an element of propaganda, alterating some positions that were assumed before.

Everything here is porous, everything calls for touching.
The ergonomy is not the agenda of the furniture. Is more the way you use the furniture. It’s purely erotique. My interest is the consciousness of our acting in space. A chair for me is not an element of ergonomy, of abandon, it’s something active, that will make you more aware and reactive. For example the Delete yourself chair is a simple structure, where you would not want to sit. But once you do it, you try to find a position, and this is this moment of consciousness and social acting. Not just sit to be sit. Once you sit, you are acting, your showing yourself. It’s part of the communication, the attraction, its performative, like in my Love me tender project.

You talk about corporality, but we are living in an era of dematerialization, take social media and digitalization, for instance.
I have no critics on that, I don’t see how we are loosing something. What I find positive in this social era, is that we gain in our ability to be more wild. To be back to an instinct wildness. This oversharing of privacy generates new possibilities: before we were educated, domesticated, and now we have the possibility to “redo” very fast. There is some doubt about that of course, you can destroy something – a situation, a reputation – without being sure. The fastness of the effect of roumors, transforms the confusion in truth. That’s the danger. On the other hand you can rebuild everything. Today I’m showing me naked, tomorrow I can make it desappear, and two days later everyone will forget about it. People is more and more golosa (greedy, Ed.), the brain becomes an eternal meta-system where you want to see the photo, or the message. But at the same time your body is asking more. We need more corporality, more materiality, more desire, more touch. Even if you have access to everything, our bodies are driving us more than our brains. Nobody is anymore afraid of their uniquness or singularity. Before it was impossible. Even architectural projects that were totally forgotten are now visible again, social media made them alive again. Take for example Ricardo Bofill’s social housings.

That’s what interests me in architecture: a tool to generate new situations, and maybe the colour is an element of propaganda, alterating some positions that were assumed before

How do you choose your commissions?
I have a very animal feeling. If I feel ok I go. Sometimes I make mistakes, but it’s really about the intuition of the moment. It’s about seduction, about eros, totally. I need to be seduced to make something. I need to experience, invent, I need to share ideas, that makes the engine work

What are you currently working on?
Since four years I’m doing a totally underground production, I decided to build a bit, now that I have a more complete corpus of theory and experimentations. After spending years in Paris, doing ida e volta between two countries, two cities, now I’m more based in Lisbon. It was not easy to be accepted by Portuguese architects, I was considered like an outsider, a total bizarre person with a different architectural background. I’m fully Portuguese and fully French, so I pay taxes in both countries: I love that. I’m not just between the two countries but also between art and architecture, I like playing with the two systems to survive. But I do it transparently, I don’t have a double life like some studios that have hidden commissions to survive. Intellectually, conceptually, the work is always jumping from one situation to the other, giving me a kind of... comme on peut definir ça, a kind of wildness. I will take Kundera, The Unbearable lightness of Being, this moment of insecurity in the practice, where I’m always jumping from right to left from up and down. This gives an ability to change, to quickly develop new ideas. It’s less comfortable as it would be if it was very linear, but it’s stimulating and accurate in terms of design. So that’s my situation now. We are developing two projects in Portugal – a chapel and a house –then a project in west of France, one in Mexico City, an exhibition in Portugal and I’m also collaborating with a fashion designer in LA.