Europe, mass tourism and consumerism: the onus of heritage

In his second novel, “Grand Hotel Europa”, Ilja Leonard Pfeijffer pronounces the death of Europe. The continent is going through a bad time, because it is wallowing in nostalgia and is being bought up by the Chinese. Tourism seems to be the only revenue model. How can the situation be turned around? 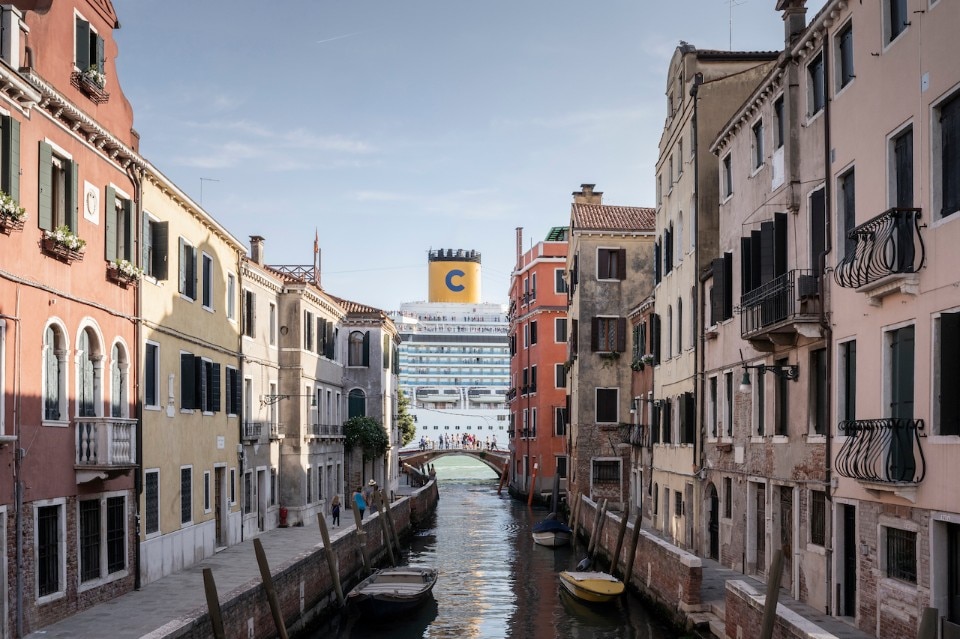 This article was originally published on Domus 1036, June 2019

Writer Ilja Leonard Pfeijffer (51) is certainly an impressive figure. On this ordinary weekday morning, he is wearing a grey suit with a purple-and-black striped tie. The tips of his shoes are canary-yellow. As he walks down the street in Leiden, many passers-by take a second look.
This is not only because of his appearance. Pfeijffer is one of the best-known poets and writers of the Low Countries. A passer-by approaches to tell Pfeijffer how much he enjoyed his new novel, Grand Hotel Europa, which appeared in December 2018. It’s a discreet and polite encounte; his readers aren’t that wild.

The writer is in Leiden for a few weeks to promote his new book. Too long, he thinks. Because although he still has an apartment there, he’d rather be home. And for the past ten years, home has been Genoa.
The Italian city was the subject of his bestselling La Superba, a novel about immigration. La Superba was not only acclaimed and translated into 8 languages, but, having gone through 24 printings, it also drew a small stream of tourists to the intimate Piazza delle Erbe in Genoa, where the writer – who calls himself “the greatest drinker of his generation” – would start to drink his round of cocktails on the terrace at the stroke of five, before leaving the same terrace late in the evening in a rather fuddled state.

Tourists who have sought out the writer in more recent years have no longer found him sipping cocktails, but drinking a glass of iced tea or water, because Pfeijffer has given up alcohol completely. Drinking didn’t hinder his creativity, but his new companion, Stella, an Italian art historian, was shocked by the quantities of drink he downed. “I couldn’t stand that I was doing something that was frightening her. Giving up drink was my sacrifice for love.”
He kicked the habit without any help, and it wasn’t easy. “The only way you can do something like that is if you have an alternative story, something you do it for and that makes your new life attractive. And that was Stella. The hardest part in the beginning was that I had to reinvent myself. The literary tourists who had read La Superba kept coming to the square. That was a bit annoying. I felt as though I was being scrutinised. Go away, I thought, the bohemian you’re looking for doesn’t exist anymore!”.

A picture of doom and gloom
Having given up drink, Pfeijffer suddenly had his mornings back and could start writing from 10am, something unimaginable before. Whether that has anything to do with it or not, the almost 550-page-long Grand Hotel Europa is his best novel to date.
Not only does the writer think so, but critics and readers are also enthusiastic. In the space of four months, 100,000 copies were sold in the Netherlands alone, the book was nominated for the Libris Literatuur Prijs, and Italian, German, French and English translations are in the pipeline.

And yet it’s a rather sobering book, with a serious and critical message.
Packaged as the story of a failed love affair, Grand Hotel Europa is about the future of Europe.
How the continent risks succumbing to nostalgia, a lack of ideas and mass tourism. After the collapse of his relationship, the main character withdraws to an old hotel in Venice. That hotel has just been bought by a Chinese investor who is adapting the heritage to the needs of Asian tourists, just as heritage is being squandered across Europe.

“Venice is the most dramatic symbol of Europe, which, for lack of anything better, is selling its past and giving in to consumerism. It has been ruined by tourism and that’s something irreversible. The figures are clear about the negative aspects. In the 14th century, Venice had a population of 140,000 inhabitants and was one of Europe’s largest cities. Of the authentic Venetians, there are now less than 50,000 left. At this rate, Venice will be empty by 2030 and we will be able to build a fence around it. For a city to lose its soul like that is terrible.”

Pfeijffer last visited Venice in late November 2018. “There were banners saying ‘Venice is a real city’. That alone proves it’s not a city anymore. It is a self-reinforcing process: when tourists discover a city, more of them come. Facilities that are pleasant for residents have to make way for tourist facilities. That’s when tourist shops take over the neighbourhood supermarket, for example. Today already it is almost impossible to find a cinema or to buy a bunch of roses in Venice. For the original inhabitants it then becomes tempting to make the best of a bad deal, by selling their houses with a surplus value. At some point, there’s no stopping the exodus.”

For Pfeijffer, not every tourist city has to undergo the same fate as Venice. Cities like Amsterdam and Berlin, for example, have been resilient enough to come up with an alternative to tourism. “All the studies show that they still have a real and vibrant economy. But it is urgent to think about how to tackle this issue, because at some point it’s simply too late. If you look at Amsterdam, the red-light district De Wallen is a major problem. It has become a zoo, and the prostitutes are the attraction. Tourists howl at the door. That makes no sense at all and it’s not sexy anymore either. The thrill of the hidden is gone; no one enters there anymore.”

Come si deve
We are now walking on the street, so that Pfeijffer can smoke. “That’s an addiction I don’t want to give up, because what else do I have left?” he says, laughing. Since moving to Italy ten years ago, the writer has become less Dutch, a little more Italian and above all more European. “The question of what that means, to feel European, is at the root of this novel. One of my conclusions is that a distinctive feature of our continent is its rich and tangible past. That past is both a richness and a burden. When you spend your whole life among art treasures, the idea that the golden age is behind you is an appealing one. In Europe, there are objective reasons for reaching that conclusion.

Europe has lost dramatically in importance as a global player. In Brazil, China and the US, months go by before they think of Europe.”
Nostalgia and the glorification of the past may well finish off Europe, the writer thinks. “In figurative, spiritual terms too, there is little room for innovation. Italy in particular is stuck in the past in all kinds of ways. Half of the world’s heritage is on Italian soil. And a lot has to be done come si deve, to be done, in other words, in the proper way as it has been done for centuries. That holds for many things, from going on holiday in August to how Italians expect their food to be prepared.

A chef shouldn’t even think about being creative with a dish like spaghetti alle vongole, for instance. That’s not appreciated at all. He must make spaghetti all vongole as it should be, as it has always been made. Neither do they want their shoemaker to be creative – they just want him to do his job.”
We need an alternative story to save Europe, Pfeijffer thinks, just as he needed a new story to get rid of his alcohol addiction. The right-wing populists are working on that alternative story and they are quite successful at it too. In the Netherlands, the nationalist politician Thierry Baudet convincingly won the elections for the Provincial Council last spring out of nothing.

Unlike many of his countrymen and fellow professionals, Pfeijffer is not too worried about Baudet’s comet-like rise: “It’s worrying, but the blind panic you saw in the Dutch media when the election results were announced does surprise me. Baudet has so many obvious weaknesses. If he becomes a power factor, he’ll stumble, even if only over his own narcissism. Baudet is actually disarmingly frank about his desire to return to the Europe of the 19th century. I think he only went into politics to get more women. Populist parties are on the rise everywhere. If you’re only just discovering this, you must have been sleeping for the last 15 years. This type of nostalgic-populist party can take up about 20 per cent. For the time being, this is a fairly stable percentage.”

Pfeijffer’s words are reassuring as they put things into perspective. At the same time, he is not the only European writer to raise the issue of Europe’s collapse. In France, the peevish writer Michel Houellebecq pronounces the death of Western culture in almost every novel. When Houellebecq received an important prize in Germany a couple of years ago, he even claimed in his acceptance speech that, because of immi- gration, Europe was facing its own suicide. If a politician were to speak the way Houellebecq does in his novels, he would be prosecuted for racism. “Oh, but I think that’s right: as a writer you can play the court jester and you have to be able to say things that are considered disgraceful, but the role of politician comes with responsibilities.”

But if he, as a writer, sees so clearly what the problem is, shouldn’t he also be able to propose a solution? When is Pfeijffer going to write that alternative story we need?
“A writer’s role is limited. If you’re asking me now what needs to happen... I mainly raise questions with regard to what I see. The answer will mainly lie in renewal and innovation. The fact that the nostalgic message is resonating en masse across Europe is an ominous sign with regard to the direction we’re heading in. If a significant part of the population is willing to believe that everything used to be better, then we can rightly speak of an old and tired continent, a continent which, like an old person, looks ahead without expecting anything from the future.”

Opening picture: the photo by Federico Sutera highlights the problem of large cruise ships sailing across the Venetian lagoon. Up to 60 m high, these ships carry from 6,000 to 7,000 passengers. Photo Federico Sutera/Parallelozero