The Mastaba, the last great work by the two artists – carried out by Christo’s nephew, Vladimir Yavachev – unlike all their other projects, is set to be permanent. 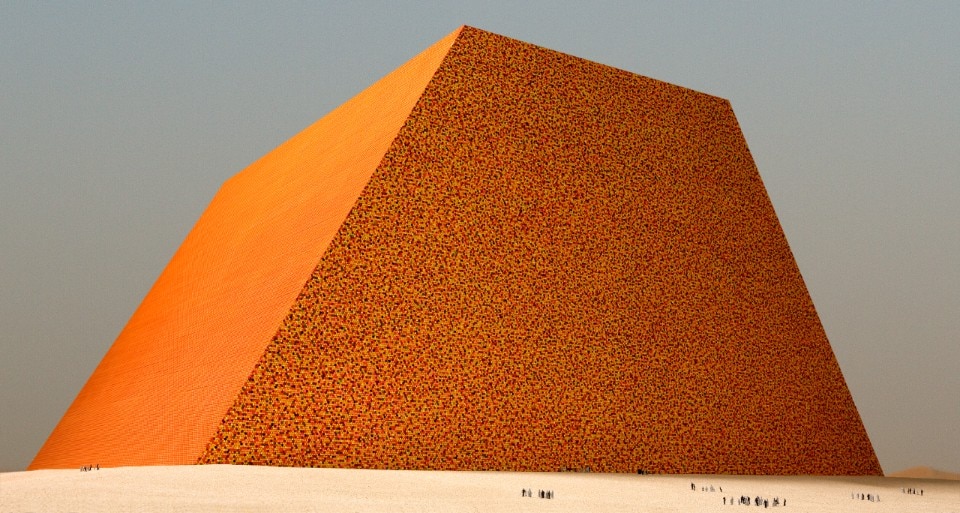 Before Christo died, in 2020, he asked his nephew, Vladimir Yavachev, to promise that he would finish the two last artworks designed by him and Jeanne-Claude, his wife: Arc de Triomphe, Wrapped (then executed in September 2021) and The Mastaba, an enormous ziggurat composed of hundreds of thousands of oil barrels stacked nearly 500 feet high.

The Mastaba, once realized, would be the largest sculpture in the world and – unlike the previous spectacular works of the two artists – it would be a permanent installation. Yavachev, at the CityLab conference in Amsterdam, said that it will take 410,000 multi-colored oil barrels and ten elevation towers to mount the final work on the site. Construction is estimated to last three years, although the on-site assembly will take only two weeks. To finance the project, the artists’ foundation will sell one NFT per barrel, for a maximum price of $1,000 each. But the foundation beyond mere knowledge of ownership will offer also an authentic 55-gallon oil barrel used to build the artwork, as maintenance will require the barrels to be replaced every 12 to 15 years.

Actually, the United Arab Emirates, where The Mastaba should be realized, has not yet officially granted government approval for the sculpture construction. However, rejections have already failed to stop Christo and Jeanne-Claude’s projects, as in the case of the request to wrap the Berlin Reichstag, in 1994. “It’s not a matter of patience,” Yavachev said. “It’s a matter of passion”.

Read also: Christo and Jeanne-Claude’s most massive work will finally be built