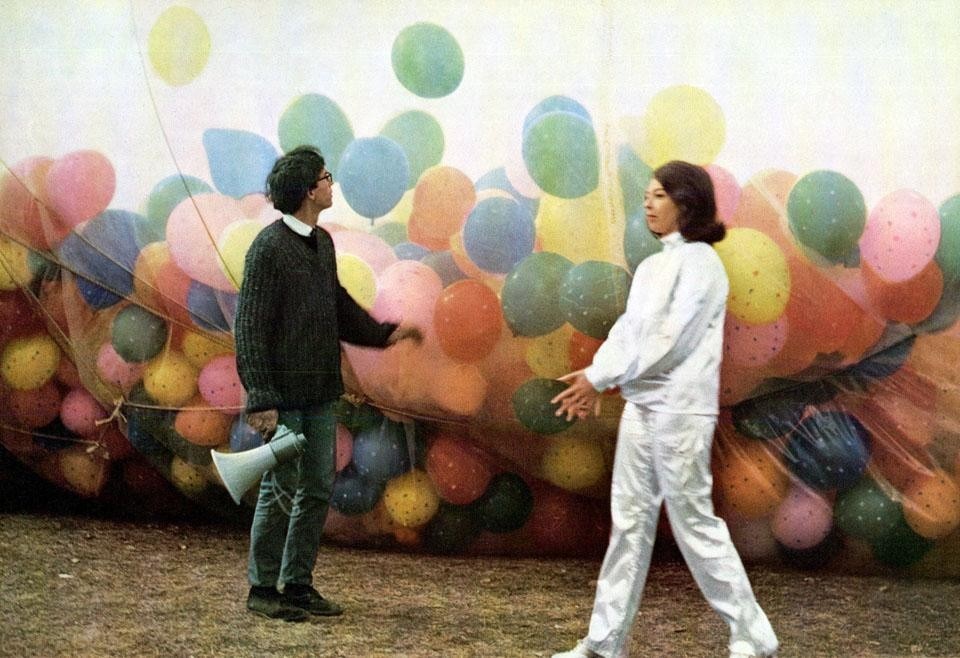 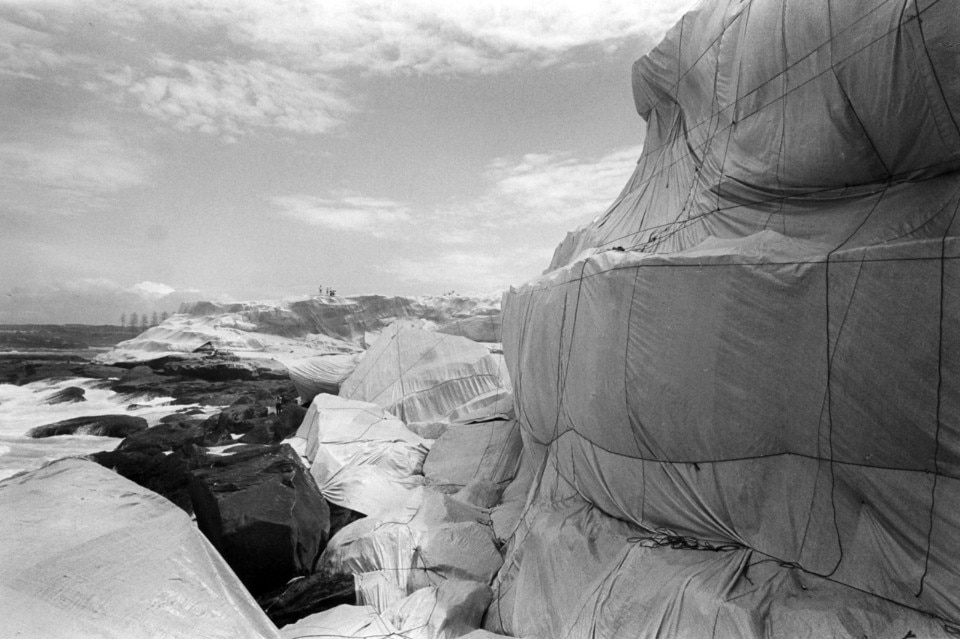 Although the Christo and Jeanne-Claude twofold signature only appeared in 1994, Christo Javašev and Jeanne-Claude Denat de Guillebon operated since the first time they met as a single whole fundamental subject, expressing more than 60 years of art work to the dimension of space and landscape.
They were born on the same day, June 13, 1935, she in Casablanca, he in Gabrovo, Bulgaria. Jeanne-Claude, the daughter of Précilda Feichheimer, a future chief of staff in the French Liberation Army, had to face a troubled childhood in wartime Morocco, to then move to Switzerland and Tunis, where she studied Latin and Philosophy, and graduated in 1952. Christo grew up in Communist Bulgaria, the nephew of the founder of Archaeological Institute of Sofia, and studied in that city at the local Academy of Fine Arts; as a painter, he had to serve as a public artist, painting mural oil portraits of Communist leaders and staging real landscape projects, designing the layout  of the productive countryside environment close to Bulgarian railways, to be shown at wealthy Western travelers of the Orient Express. In 1956 he decided to flee Bulgaria, crossing the Iron Curtain and reaching Vienna, where he spent one year to  then move to Geneva and Paris where, in late 1958, Christo and Jeanne-Claude finally met.

A unitary entity was created, where Jeanne-Claude would contribute starting from the great-scale realizations season. Taking part to the growing wave of Nouveau Réalisme, Christo had been working before on the redefinition of the status of common objects, as Jasper Johns — whom Christo had met in Paris — had also been doing, with his first Wrapped objects, specifically the wrapped cans for his Shelves (1958), and also on the subject of the ambiguity of contemporary materialism, that would then generate his Storefronts (1963-68), showcasing opaque shopping windows hiding what they should have usually shown. The constant presence, in Christo and Jeanne-Claude’s reflection, of contemporary social and political issues, together with their personal evolution and education, was the base of their shift towards public scale, towards the city as a first step in the landscape dimension of their work. The Wall of Oil Barrels, The Iron Curtain, realized in Paris in June 1962, obstructed the narrow rue Visconti, creating a social obstacle (blocking the flow of circulation) reconnecting every passer-by to the recent construction of the Berlin Wall and the power of oil, affecting their era at a global scale.

Christo and Jeanne-Claude, 42390 Cubic Feet Empaquetage realized with the students of the Minneapolis School of Art in 1966. In Domus 448, March 1967

Christo and Jeanne-Claude, 42390 Cubic Feet Empaquetage realized with the students of the Minneapolis School of Art in 1966. In Domus 448, March 1967

In 1961, a manifesto had  appeared of the forthcoming long artistic season of Christo and Jeanne-Claude, the Projet d’un édifice public empaqueté, a collage showing the outline of a façade that was completely concealed, like in an enormous surrealistic package, anticipating the artists’ fundamental semantic couples of wrapping/concealing and opening/freedom (Donovan, 2006). This vision would first materialize in in the Wrapped Kunsthalle Bern (1968) and the ___ (1969), where the concealment of the public building as an almost neglected object in its everyday dimesion would give it back a value and a power of attraction.
Such conceptual development would enrich the technique of wrapping with both spatial and productive dimension: further realizations would wrap immaterial volumes made of air, while all realizations would require a full engineering process conferring them the status of real construction works.  It is the case of the  5,600 Cubicmeter Package for Documenta 4 in Kassel (1968), wrapping an 85-metres-high air column, giving it a material dimension.

What we want to create in our work, through the transitoriness of wrapping, is a quality of love and tenderness towards the transitory and the ephemeral, which are the laws of life. (Christo and Jeanne-Claude)

The two artists had settled in New York in 1964, and since those years, since 1968 specifically, their work on scale articulated furtherly, extended its scope to the landscape scale, consequently associating somehow the Christo and Jeanne-Claude signature to the realm of Land Art: the Wrapped Coast, One Million Square Feet (Little Bay, Australia, 1968-69) was a combination of concealment of objects and interpretation of the territorial scale as geological fact.  The discourse was furtherly implemented with the Valley Curtain (Grand Hogback, Rifle, Colorado), conceived in 1970 and realized in 1972: such powerful linear red marks, scenically stretching across a rocky valley, lasted 28 hours, but it was iconized by a set of famous images and a documentary.

The work by Christo and Jeanne-Claude became in fact characterized by: the temporary dimension; a constant documentation and carefully designed media coverage of each process; the construction work dimension, activating different knowledges, expertise, working categories and economic spin-offs; the dimension of independence in its realization process, always financed by selling preparatory drawings and previous works, almost always on the artists’ own proposal in order to avoid any constraint from a client; the frequent political resistances against its realization;  the long lapse of time between the first concept and realization. All this showed already in the realization of the 39,4 kilometers of Running Fence, conceived in 1972 and realized in 1976 between the Sonoma and Marin counties in California, but most of all in some of the most famous wrappings, such as the Pont Neuf in Paris (1975-85) and the Reichstag in Berlin conceived in 1971 and finally realized in 1995, after having called out countless actors and phases of global political history, different geopolitical orders of Germany, local and national administrations.

Christo and Jeanne-Claude conceived their last wrapping in 1975. The interaction of their work with space took more articulated shapes, such as the offset of territorial entities, expressed in the pink footprint surrounding the islands of Biscayne Bay in Florida (Surrounded Islands, 1980-83), or in the duplication through a linear fabric of the stream of the Arkansas river (Over the river, Colorado, 1996-2006). A potentially infinite extension of elements capable of creating pictorial effects in space is instead the foundation their most long-awaited project (1979-2005), The Gates (Central Park, New York City) and The Umbrellas, Japan-USA, 1984-91. The latter is probably the least ideologically tense between Christo and Jeanne-Claude’s projects, The Gates is instead a visual denunciation of rational, artificial control we extend on what we call nature, through a repetitive dissemination across the whole park of an element of transition, the gate with its saffron  yellow fabric, echoing and assuming the colors of surrounding nature and translating it into a built, man-made object

The couple (…) gives me the impression of being (…) the two parts of a same whole, the simultaneous vectors of one and the same perspective thought. (Pierre Restany, 1997)

Jeanne-Claude died in 2009. In the following years, until his death in 2020, Christo kept the Christo and Jeanne-Claude signature and carried on extending the discourses he had opening before, even in unedited articulations such as the Floating Piers (2014-16), bringing the public around for a  walk on the waters of the Iseo lake (Italy) on floating yellow fabric ribbons, or the London Mastaba (2016-18) for the Hyde Park Serpentine, enigmatic primary volume, once again made of barrels, “…transforming light and reflections of the Serpentine Lake, like in a big abstract painting” (Christo, 2018).