As the international conflict advances, Editorial Director Walter Mariotti offers us a lucid insight into the now blurred boundary between reality and simulation. 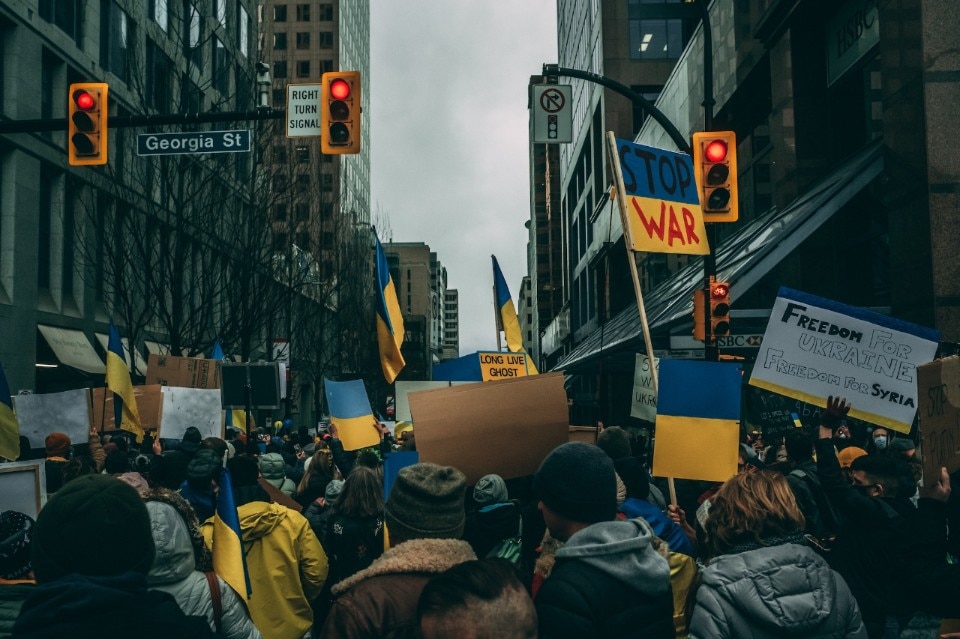 Besides Putin’s atrocities and the fatal mistakes made by Europeans and Americans, the invasion of Ukraine brings us to the heart of design and its current power, allowing us to understand why it is so important in our time. The invasion of Ukraine shines a new spotlight on the age-old history of borders, which have always been an archetypal form of – military, more than civilian – design. It is in fact armies that move borders, and through them, they change the perimeters of states and cities, politics and economies, people and their hopes and dreams.

Since the dawn of humankind, this reality has never changed, except in a forgotten story written by Jorge Louis Borges in 1946 about an empire where the art of cartography attained such a level of perfection that it reproduced cities, provinces, and regions on a real scale. Borges recounts how this map overlapped and replaced the real empire, to the point of expanding and shrinking automatically as wars followed one upon the other until one day the Empire began to decay and disappeared – unlike its meticulous map, which despite what happened continued to live and float on air as the only, true, absolute reality.

For many years, things went exactly as Borges had described. After the end of the Cold War, people thought that maps had really replaced reality and therefore that design was more real than reality. The evolution of the Internet and OTTs such as Google and Facebook sped this effect up, making people believe that space and time had first shrunk, as Amazon Prime demonstrates, and then dissolved into that “desert of the real” that opens the film The Matrix. An infinite, rarefied landscape represents what remains of reality, or rather, of the reality that preceded the virtual, liquid, unstable reality of which the sociologist Zygmunt Bauman talked. In this new world, the individual struggles amid a constant flow of ever-changing big data, which prevents them not only from recognising what reality really is but also from understanding the meaning of things.

The invasion of Ukraine is not only the return of history, which in fact never ended, but also the irruption of the ancient reality where technology is used as such, but war is not the one we fight on Fortnite and other digital role-playing games. But not only that: the assault on Kyiv shows that the Russian regime and its leader do not represent the narrative imposed by the West, but the one it has repressed as in a psychoanalytic transference because it is at least since the intervention in Chechnya in 1999 (applauded by Europe and the world as a bastion against Islamic extremism) that Putin has been systematically attacking to realise his project: for Great Russia to become the heir to the Soviet Union but above all to the Tsars. This meta-historical project looks a lot like the Metaverse of social networks, where everyone is free to build their own world according to their own will.

Ukraine is therefore a geopolitical demonstration of the power of design, which from the Trojan Horse to the present day has been deceiving reality by replacing it with something artificial. The first to explain that social reality was the result of a redesign process, that is, a simulation, was Jean Baudrillard. In the 1960s, i.e. before the advent of the Internet, the French sociologist explained how this process would end when the simulacrum of reality ceased to be a copy of reality and became hyperreal. And Ukraine is the latest atrocious demonstration that this is exactly the case. Not only does it show how the narrative of the facts - Ukrainian democracy, violence against minorities, the Nazi president who is actually Jewish - is inevitably manipulated by the media that establish circles of fake news, but also how the overabundance of news and knowledge available on the net and social media does not allow us to get out of the matrix and back to the true reality. Rather, it makes us even more dependent on fallacious narratives.

Ukraine is therefore a geopolitical demonstration of the power of design, which from the Trojan Horse to the present day has been deceiving reality by replacing it with something artificial

More than the arbitrariness of borders, the war in Ukraine is the latest demonstration of the abolition of the border between reality and virtuality. And the human cost of innocent people risking their life is the price that reality pays for this fatal substitution, for this strategy that also has other examples on social networks, NFTs, and above all the Metaverse, a fully-fledged alternative world that will allow users to live their lives as they please, independently of reality. Within the Metaverse, people will be able to work, make friends, buy houses or invest in art, precisely in those Non-Fungible Tokens which, unlike bitcoins, are non-interchangeable cryptographic data units governed by the decentralised mechanism of the blockchain.

One may or may not agree with all this, but it would be difficult to argue that the Metaverse doesn’t represent a virtual yet highly real society, totally addicted to the commodification of every event, object, and feeling. Just as the attack on Ukraine represents the full realisation of the dictatorship of the image and of the simulacrum that replaces, mystifies, and then kills the old previous reality, the one dominated by Aristotelian truth, or rather by the equation facts=representations. Of course, fatigue, justice, evil, pain, and joy still exist and are highly real. But the matrix in which we are immersed, the viral marketing that coincides with the apotheosis of consumerism and the fourth globalisation tend to replace them with a daily Truman show, where when reality suddenly appears, as in the rockets launched against Ukraine, the system shorts out.

And yet, one can bet that the redesign of the world brought about by technology and synthesised by the social media and the Metaverse will soon invade every human activity, from clothing to finance, accelerating and taking to a higher level the replacement of reality by the truth of illusion. And here again, Baudrillard comes to our aid: since in the design world the value of the sign is not inferior to that of the use, but is independent, we will soon have a “reality without reality”. It will be the victory of Zuckerberg and digital capitalism because the tendency to accumulate is easily exportable to virtual and parallel worlds. Without needing to colonise the Moon or Mars.

The future of Ukraine is being decided in these dramatic days. And we all hope that diplomacy will succeed in stopping the massacre and restoring peace. However, it is less realistic to think about restoring the truth, because it is a prisoner of simulation and it is being dragged down by the power of reality’s redesign. Jean Baudrillard was very pessimistic about this, Jorge Louis Borges as well. Let us hope that they were wrong and that the upcoming events will surprise us again.

Read also: Venice Biennale: curator and artists pull out of the Russia Pavilion