The relevance of design for David Bowie, and of David Bowie for design

From his collection of Memphis furniture to the costumes of his alter-egos, the life and career of the British musician have been indissolubly intertwined with the world of design. 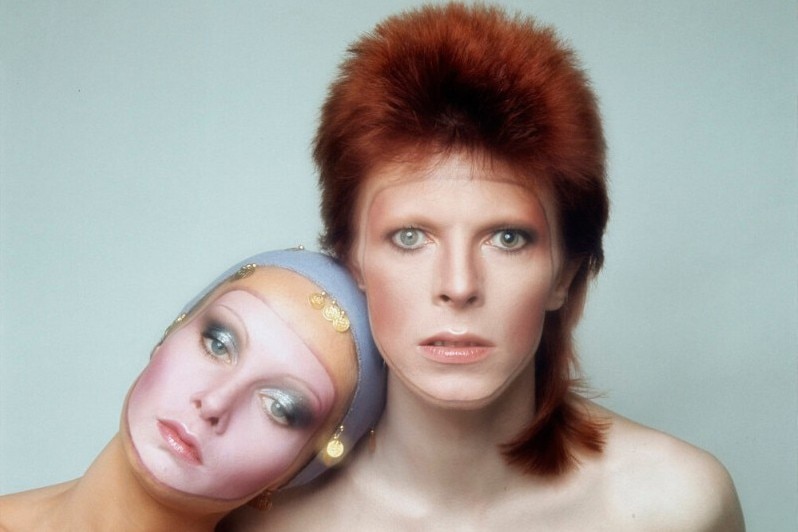 In November 2016, less than a year from the departure of David Bowie, Sotheby’s auctioned a peculiar collection that belonged to the late artist. One hundred Memphis design objects – including statement pieces like the Carlton bookshelf and the Casablanca cabinet by Ettore Sottssass Jr., the Plaza vanity Table by Michael Graves and the Super Lamp by Martin Bedin – that highlighted Bowie’s passion for the collective of designers founded in Milan in 1981. It comes as no surprise that a group of artists whose name nodded to Bob Dylan’s 1966 number Stuck Inside a Mobile with the Memphis Blues Again – a subtle reference to Sottssass Beatnik past, also shared by Bowie – met the tastes of the singer, who in fact had dedicate to Dylan a song in his breakthrough LP Hunky Dory.

Bowie appreciated their ability to create strikingly innovative pieces, despite employing démodé materials like Formica, root wood and plastic laminates. Sat next to his Palm Springs table by Ettore Sottssass, in a 2009 interview for GQ, he stated: “When I was five, I spent an awful lot of time reading and drawing on the living room table, just like this. I don’t want to follow this line of thought to the inevitable conclusion, but it does look as though all that I’m missing is a model train set. The table is by the peculiar Milanese design company Memphis and is probably made out of hardboard and old socks.”

Regardless of names and references, Bowie’s love for these objects can be traced in his own persona. By the early ‘80s Memphis incarnated that untamed artistic freedom that Bowie had been representing for over a decade. In Memphis’ chromatic choices – going as far as nobody ever dared to go – as much as in their abstract, nearly childish, shapes one could trace the enigmatic and theatrical innovation brought by Bowie’s alter-egos and by their lyrics.

Thus, if Memphis’ designers succeeded in turning luxury furniture into a playful game of shapes and colours, Bowie stood as a profound and refined, yet never exclusive, intellectual. A postmodern design for an artist who, starting from modernism, was able to shape a new modernity or, better, to envision the future.

Modernism at the roots of the Bowie myth

Born David Robert Jones in Brixton, South London, in 1947, Bowie manifested an interest for the world of arts even before picking up his first instruments. When studying art, music, and design at the Bromley Technical High School, David fell in love with jazz and blues, therefore, with their modernist artworks. On one hand modernism as the current permeating the design and the architecture of the times, on the other as the Mod subculture the young Bowie adhered to, were pivotal in forging his artistic sensibility, soon coming to life in the total art of his albums, videos, costumes and performances.

It is with this modernist attitude that Bowie led the evolution of popular culture, reading the changing spirit of times like an open book and embodying it before it turned into fashion, actually defining it.

The artworks of Bowie’s albums, just like their content, or, more simply, his ever-evolving face, became the map of fifty years of Western design and pop culture. Bowie moved seamlessly and at ease across genres and subcultures, spanning from the rhythm and blues of early ‘60s London to the Jungle of the late ‘90s, and encompassing psychedelia, glam, “plastic soul”, new wave and new romantic along the way.

The total art of the alter-egos

The hippy performances and the theatre practices between the commercial failure of the first singles and the breakthrough of the 1970s are therefore fundamental in tracing the aesthetics and the total art that characterise the entire career of Bowie.

Thanks to the experience of the Art Labs – a movement formed in 1968 in the English capital, which influenced many likeminded mixed arts workshops across Europe, including the London ICA (Institute of Contemporary Arts) – which he also promoted in the town of Beckenham, Kent, Bowie developed the mindset resulting in the staging of a plethora of alter-egos. Their birth and death are summoned by Bowie himself, not as a tantrum, but as a necessity generated by the changing cultural season.

I’m Pierrot. I’m Everyman. I’m using myself as a canvas and trying to paint the truth of our time on it.

Bowie made this clear in a 1976 interview for the Daily Express: “I’m Pierrot. I’m Everyman. What I’m doing is theatre and only theatre […] I’m using myself as a canvas and trying to paint the truth of our time on it.”

In doing so Bowie surrounded himself with artists, designers and tailors like Freddie Burretti, who crafted the ice blue suit used in the Life On Mars? video and the mustard one immortalised by the camera of Terry O’Neil. It was another maestro of British photography, Brian Duffy, to capture the role played by make-up in Bowie’s aesthetics with his portrait adopted for the timeless artwork of Aladdin Sane.

David Bowie in a costume by Kansai Yamamoto

The stage costume designed in 1972 by Kansai Yamamoto for David Bowie was inspired by those worn in the Bauhaus theatre.

The glam alien with whom in 1972 Bowie revolutions the way the visual identity of musicians and their performances were conceived.

The Rise of Ziggy Stardust

Bowie at the rise of Ziggy Stardust, before dying his glam mullet red, 1972.

Bowie wears the pierrot costume designed by Natasha Korniloff for the Ashes to Ashes video, 1980.

David Bowie as the Thin White Duke on US TV program Soul Train, 1975.

A poster releaed by RCA to promote the release of Aladdin Sane (1973) and featuring the timeless portrait of Bowie by photographer Brian Duffy.

David Bowie in a costume by Kansai Yamamoto

The stage costume designed in 1972 by Kansai Yamamoto for David Bowie was inspired by those worn in the Bauhaus theatre.

The glam alien with whom in 1972 Bowie revolutions the way the visual identity of musicians and their performances were conceived.

The Rise of Ziggy Stardust

Bowie at the rise of Ziggy Stardust, before dying his glam mullet red, 1972.

Bowie wears the pierrot costume designed by Natasha Korniloff for the Ashes to Ashes video, 1980.

David Bowie as the Thin White Duke on US TV program Soul Train, 1975.

A poster releaed by RCA to promote the release of Aladdin Sane (1973) and featuring the timeless portrait of Bowie by photographer Brian Duffy.

Then, there is the collaboration with Alexander McQueen, with whom Bowie co-designed the Union Jack-patterned coat – an “anti-icon” – protagonist of Earthling, the 1997 album representing one of the experimental peaks in the artist’s career. An LP where, despite his fifty years of age, Bowie felt the need of documenting what, back then, was the new drum and bass phenomenon.

Impossible not to mention the pierrot costume by Natasha Korniloff for the 1980 Ashes to Ashes video, a glammed-up tribute to the mimes that had fascinated the young Bowie of the 1960s when, still a folk singer-songwriter, he posed for the camera with his face embellished by white make-up and a black tear.

However, it’s the collaboration with Japanese designer Kansai Yamamoto to stand out. With the costumes used for the Aladdin Sane Tour of 1973 Bowie was among the first artists to reveal the necessary relationship between music and fashion design. Yamamoto’s creations, with their hyperbolic silhouettes are perfect for representing the glam and theatrical extravagance of Bowie-Aladdin Sane.

These costumes, inspired by those of the Bauhaus theatre, highlight the importance represented by the past – from the Weimar School to the commedia dell’arte and the pop icons of the youth – as a prerogative to shape the present.

Stage design and album artworks to envision the future

The stage is the inevitable site where Bowie applies the continuous creation and destruction of new cultural seasons. Take the urban, asphyxiating and dystopian one designed for the Diamond Dogs Tour (1974) to resemble a representation of the scenarios of George Orwell’s 1984. Or, the human checkboard adopted for the 1980 Floor Show, a TV special aired in 1973 where Bowie brings to life his vision of the future by covering a song old of nearly ten years (Sorrow by The McCoys) while quoting, in a whirlwind of sexual tension, Alice in Wonderland in conversation with the androgynous muse Amanda Lear.

Not to forget the films starring Bowie. On one hand the alien and alienating set design for The Man Who Fell to Earth (1976), on the other those for Labyrinth (1980) by Jim Henson – the puppeteer father of The Muppet Show – where homage is paid to the impossible architectures of Escher and Piranesi.

Offering a visual representation of Bowie’s vision of contemporary society and on the state of the arts are the covers of his albums too. Take the glam cyborgs with make-up by Barbara Daly of Pin Ups (1973), where David, at least conceptually, anticipates the dawn of Punk, and the zoomorphic, half man-half dog Bowie of the artwork of Diamond Dogs (1974) by Guy Peellaert – the Belgian illustrator who had already given birth to the countercultural comic Pravda and had worked on the interiors of Paris cult night club Crazy Horse.

But also the importance of Pop Art and of the Art Labs experience in the original artwork for the US release of The Man Who Sold The World (1971) by Michael J. Weller, as well as the album’s new cover featuring Bowie posing in a Mr Fish dress inspired by pre-raphaelite paintings.

Photograph by Justin De Villeneuve used for the artwork of Pin Ups, 1973

Illustration by Guy Peellaert based on a photograph by Brian Duffy.

Painting for the poster of The Man Who Fell To Earth by Nicolas Roeg, 1976.

Photograph by Justin De Villeneuve used for the artwork of Pin Ups, 1973

Illustration by Guy Peellaert based on a photograph by Brian Duffy.

Painting for the poster of The Man Who Fell To Earth by Nicolas Roeg, 1976.

Or his more recent collaboration, since 2002, with Jonathan Barnbrook who, among others, conceived the artwork for The Next Day (2013), by readapting and ironically altering the cover of Bowie’s classic album Heroes.

It was Barnbrook, again, to design the visual identity of Blackstar, Bowie’s last opus and final coup de theatre, unexpectedly released in January 2016 on the day of his 69th birthday and just a few days ahead of his departure. The packaging is a gem of symbolism, containing hidden allusions to the artist’s terminal condition and able to reflect, according to the light it gets exposed to, images of stars and constellations. The final salute of the Starman to his audience.

David Bowie’s practice of sacrificing his alter-egos to the altar of pop culture has nonetheless contributed to their immortality. As a consequence, pop culture itself has been absorbing his genius, repeatedly taking the late musician as a source of inspiration. From fashion collections to works of art and graphic design, the footprint of Ziggy Stardust or of the Thin White Duke is always there, in a continuous postmodern pastiche of references.

Read also: Massimo Cantini Parrini: winner of the David for the costumes inspired by David Bowie

Think of the time when, just a couple years ago, Italian rapper-turned-pop star Achille Lauro stormed the Sanremo Festival stage on prime-time television with a Gucci suit simultaneously tributing the Life On Mars? And Ziggy Stardust-era Bowie. The same Italian fashion house under the creative direction of Alessandro Michele had already nodded to Bowie in their 2018 Gucci Cruise campaign Roman Rhapsody, when a series of personalities, including singer-songwriter Lucio Corsi, were filmed interpreting Rebel Rebel on karaoke.

Six years on from his death, Bowie’s pioneering androgynous aesthetics perhaps are his most influential heredity, another sign of the ability of the Man who fell on Earth to intercept and anticipate generational trends and shifts in culture.