The inauguration of the new bridge of Genoa

After the tragic collapse of the Morandi Bridge, today has been inaugurated the new viaduct over the Polcevera, designed by Renzo Piano. 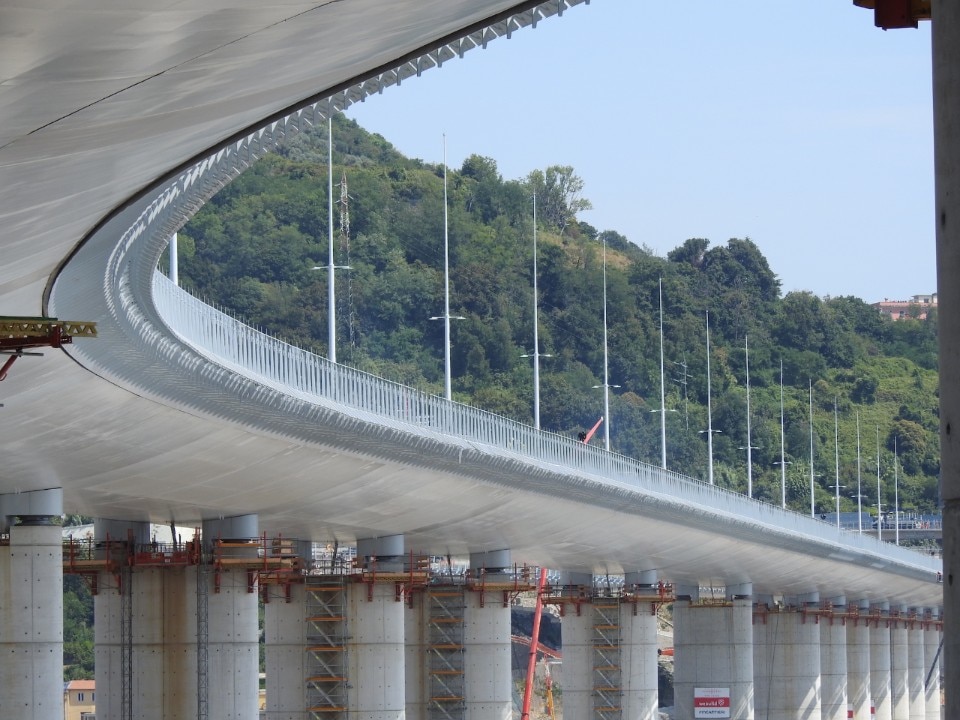 After the tragedy of the Morandi Bridge, partially collapsed on August 14, 2018 causing 43 victims, at 6:30 pm today after two years the new viaduct over the Polcevera has been inaugurated, designed by Renzo Piano. Genova San Giorgio, this is the name of the new bridge, will then be open to traffic from August 5.

It was 1967 when, after seven years of work, the work of engineer Riccardo Morandi was inaugurated, already defined then as “a great work of art of unitary conception”. A viaduct more than one kilometre long and suspended 45 metres above ground, connected the Genoa-Savona motorway with the Genoa-Valle del Po motorway. Over time, however, it had been the subject of various maintenance works and controversy over its stability, and the illusion of that infrastructure necessary for the city's viability died out after half a century, until the tragic morning of 14 August 2018 when, just before midday, one of the three pylons supporting the bridge collapsed, dragging with it a stretch of road about 200 metres long.

“Genoa has proved to be a fragile city, a characteristic that can often be associated with beautiful and precious things. However, the fragility of the city must be read as an opportunity to change and evolve, freeing us from preconceptions and obtuse constraints. And “Fragile” is precisely the theme around which the Foundation of the Order of Architects of Genoa is focusing its cultural proposal this year, trying to stimulate a debate in this sense,” explains the president of the Foundation itself, Lorenzo Trompetto. “At a time of global economic crisis, our city can be a laboratory, a case study of development because it is less anchored than the great European capitals to speculative development. In this certainly the “Genoa Model”, intended only as an opportunity for the redevelopment of a part of the city, can be considered a positive example. Certainly this process will have to be implemented with forecasting and planning and not only to buffer emergency situations. Only in this way we will be able to face the change with greater serenity, being able to count on the comparison between the different hypotheses that only the instrument of the competition allows.”

The construction site took place quickly: from demolition in February 2019 to the green light on 22 March, from the laying of the first foundation mast on 15 April to the completion of the last pylon in February 2020, without stopping construction even for the complications caused by the pandemic. Without germinating the construction during the coronavirus, the viaduct was built in times considered record-breaking, at least for Italy. Costing 202 million euros, the new bridge is 1,067 meters long, has 19 spans that are 40 meters high and are supported by 18 pylons. On the north and south sides there will be two rows of solar panels that will meet 95% of the energy needs of the bridge. Four robots hanging outside the bridge will be used to clean and monitor the structure, while on both sides of the carriageway there will be 18 light antennas 28 meters high which, aesthetically, represent the masts of the vessel to which the viaduct resembles.

“With the inauguration of the Genova San Giorgio bridge we celebrate a very important milestone for our city and Liguria, both symbolically and infrastructurally. Satisfaction with the result achieved must not, however, make us forget what happened on 14 August 2018, as a sign of respect for the 43 victims of Morandi, their relatives and friends”, comments the President of the Order of Architects, Paolo Raffetto. “Having made this necessary clarification, it is worth reflecting on the real meaning of the “Genoa Model”, to refer to the unity of intent that has seen all those involved in the project working in the same direction, even before the exceptions granted, on an extraordinary basis, for the realization in the shortest possible time of a work of such fundamental importance for the territory”.

Read also: The new bridge on the Polcevera designed by Renzo Piano
Share