Grandeur and foolishness of totalitarian architecture: the North Korean regime has squandered 750 million dollars for a 330-meters-height, reinforced concrete billboard. 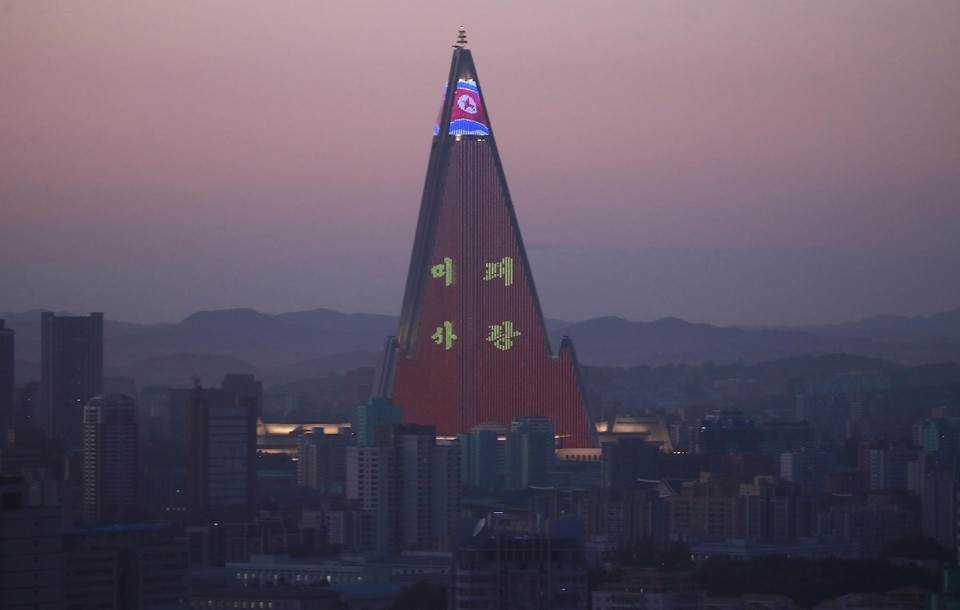 Through all the ages, dictatorships of any orientation have distinguished themselves for the never-ending sequence of more or less heinous atrocities that they have perpetrated against their population. Furthermore, they have consistently stood out for the tragicomic architectures and urban plans through which they have chosen to represent their power. Few buildings embody this questionable primacy better than Pyongyang’s Ryugyong Hotel, a huge monolith wedged in the very heart of the North Korean capital, the highest point – metaphorically and factually – of a whole century of construction machismo.

The founding act of the clumsiness of each and every totalitarian government in this regard is probably the Palace of the Soviets in Moscow, as imagined by Russian architect Boris Iofan, the winner of the “rigged” competition launched by the party’s leaders in the early 1930s. The decent but reactionary Cathedral of Christ the Saviour was blown up to make space for a sturdy multi-level wedding cake – I hope readers will forget this inflated metaphor –, which could raise a giant statue of Lenin half a kilometer above ground level. Following the competition, a series of events unfolded which proved even more preposterous than the project itself: the working site was soon abandoned, the building’s foundations demolished to create the Moskva swimming pool (1958) – which was at the time the largest in the world – and to conclude, the church was rebuilt in its original shape, in time for the Jubilee of the Year 2000.

A few decades later, in the 1980s, the inauguration of the remarkably tall Westin Stamford Hotel by I. M. Pei in Singapore (1986) stresses out the North Korean regime so much that they decided to embark in the ambitious project for the Ryugyong Hotel. By accepting, swiftly but with very little foresight, to take up the challenge of the Western world, although one that was never actually issued, they set in motion a stream of incidents which is just as funny as the Palace of the Soviet’s.

The construction of the tallest hotel in the world was supposed to last just a few months, as the opening would coincide with the World Festival of Youth and Students, to be held in June 1989. On that occasion, North Korea was willing to impress both the East and the West – hierarchs couldn’t predict their untimely symbolic reunion, precisely that year, in May – with an accommodation facility as high as 330 meters, even six more than the Eiffel Tower. The commission goes to the local firm Baikdoosan Architects & Engineers, who draw a pyramid-like skyscraper, which might have been vaguely inspired by San Francisco’s Transamerica Pyramid (William Pereira, 1969-1972), and which some sources describe under the terms of “neo-futurist style”.

Read also: Korea–Korea is a photo project by Dieter Leistner in which the German photographer compares images and places from the North and the South showing the stark difference between the two countries.

With a futurist sensitivity the Ryungyong Hotel certainly share the arrogance of its nonsensical quantities: besides its dizzying height, it is worth mentioning the floor area of approximately 360 thousand square meters, the more than three thousand rooms originally planned and the no less than five rotating restaurants, enough to give seasickness even to the more trained stomachs. But it’s only a short step from glorious figures to ominous ones: the construction costs, estimated around 750 million dollars, corresponding to 2% of an average year of North Korean gross national product, and the 16 years of interruption of a working site that a country on the brink of bankruptcy, between international embargo and domestic squandering, couldn’t afford anymore.

Between 1992 and 2008, the concrete structures of the Ryugyong Hotel, virtually complete but devoid of any finishing – cladding, window frames, lights – encumber Pyongyang urban landscape as a ghostly presence, an accidental icon of the failure of the political system that payed for it.

Read also: Kaplicky and Boeri on Pyongyang: open debate at the Serpentine.

In the years 2010, as several attempts to buy and compete the hotel, also by international companies, all come to nothing, the North Korean government keeps mulling over on the sensitive issue of the Ryugyong Hotel’s failure, until it identifies a resourceful escape route. No more rooms or restaurants, either static or rotating, are needed: the construction should no longer be considered as a full-fledged architecture. It can be cladded and decorated, painted and polished, and even more importantly filled with led lights, but just in order to use it as a giant night lantern.

Since 2018, during the day the Ryugyong Hotel looks like a nasty, significantly out-of-scale office block, one of those which bring to mind Ronald Reagan’s United States or the early-20th-century construction boom of some middle-eastern Emirates. As night falls, it turns into a triangular giant screen, animated by kitsch lights spectacles or tremendously serious video messages from the official propaganda. As a matter of fact, the wannabe tallest hotel in the world has turned into the most expensive billboard on the entire planet.