The forerunner of the early 20th century European avant-gardes advocates for a resolute break with the past, and a radical renewal of all forms of artistic expression. 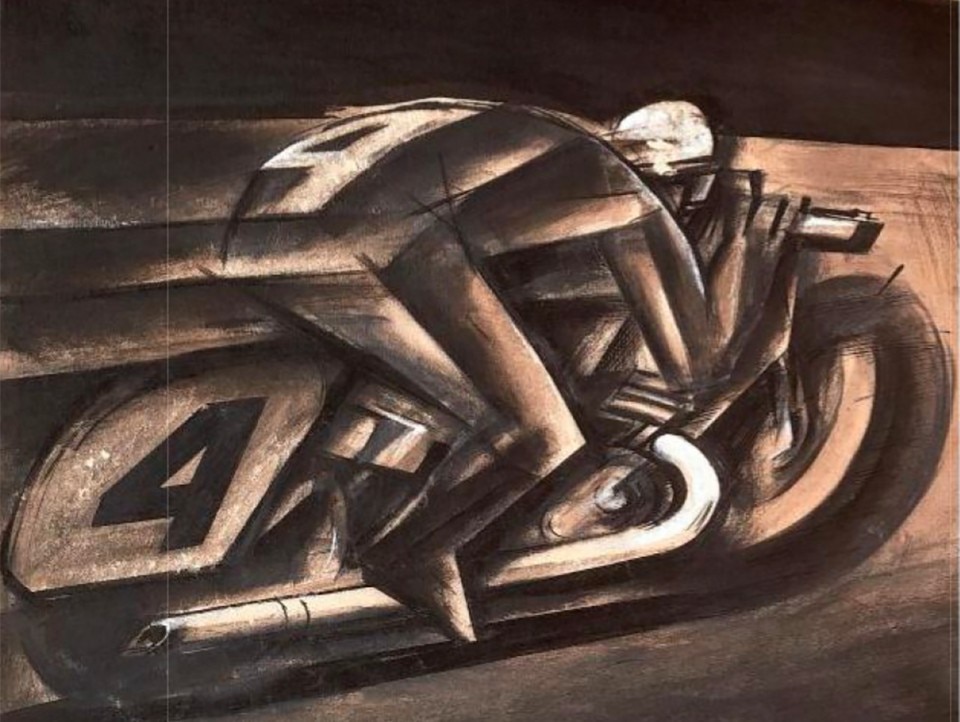 Futurism is commonly considered as the forerunner of the European artistic avant-gardes from the early 20th century. As opposed to other movements, Futurism has an initiator, poet Filippo Tommaso Marinetti (1876-1944), and a birthdate, 1909. That is the year of publication of the first Manifesto futurista, by Marinetti himself, on a few Italian newspapers, and later on Le Figaro, which featured its updated version on February 20.

Starting from this sturdy foundation act, Futurism stands out as a resolute break with the past: against traditionalism, against the academies’ inaction, against the obsolete habits of a bourgeoisie world which fails to get rid of 19th century respectability. Futurists cope with this state of things, which they deem unbearable, with a blazing reaction: they invoke an all-encompassing, insubordinate and aggressive vitalism, they stand for an unbridled exaltation of progress, as made possible by the latest scientific and technical achievements, they praise technology, speed, and flying. The futurist season unfolds under the banner of radical and controversial proclamations: Marinetti has no hesitation in claiming that it is necessary “to destroy museums, libraries and all types of academies”, to break free from their historical burden, and he glorifies war as “the world’s only hygiene”.

Read also: Brutalist Futurism. In 2018, Dioniso Gonzàlez's architectures, between fiction and reality, are on show at London's Maddox Arts.

Besides Marinetti’s programmatic points and powerful declarations, a retrospective historical analysis reveals how Futurism is anything but a “monolithic” movement. On the one side, futurist experimentations continue a few research axes which have already been explored, with different outcomes, by several movements from the late 19th century: Scapigliatura, Divisionism, Symbolism and the Decadent movement.

Moreover, futurists establish a clear and fruitful relationship of exchange and mutual influence with other contemporary European avant-gardes, from Cubism to Abstract art, from Dada to Surrealism and Methaphysical art. Precisely the progressive rapprochement to Cubism marks the evolution from the first to the second generation Futurism, which is conventionally associated with the passing of Umberto Boccioni (1882-1916) and the subsequent shift of the movement’s barycenter from Milan, where it was born, to Rome. At the end of the 1920s, a further turn towards Surrealism opens the age of the third generation Futurism, shortly before its final dissolution.

Forme uniche nella continuità dello spazio (1913) is possibly Boccioni’s most famous sculpture, leading to its extremes the reflection on dynamism and the simultaneous vision, achieved by the breakdown of the object’s plans. These topics are transversal to all of the most representative works of the first generation Futurism, including Sviluppo di una bottiglia nello spazio (1912), also sculpted by Boccioni, and his painting La città che sale (1910-1911), as well as Dinamismo di un cane al guinzaglio (1912) by Balla, Dinamismo di un’automobile (1913) by Russolo and I Funerali dell’anarchico Galli by Carrà (1911).

Futurism is a fundamentally metropolitan movement, and yet it has a minor impact on the urban environment. The futurist metropolis is largely displayed in the works by many of the movement’s painters, such as Tullio Crali (1910-2000), the author of Aeroporto stazione, aeroporto urbano (1931). On the other hand, though, futurist architects’ designs are much more often drawn than built. Sant’Elia’s bold proposals for electricity power plants, terraced residential buildings, factories and churches, as well as for the new station of Milan (1913-1914), all developed in the early 1910s, remain on paper. Similarly, neither Costruzioni per una metropoli moderna by Mario Chiattone (1891-1957), nor his several apartment buildings, nor most of the “typographical” architectures by Fortunato Depero (1892-1960) will make it to the third dimension.

Read also: Futurism at the Guggenheim. The exhibition curated by Vivien Greene has the unquestionable bonus of being extremely informative and equally inclusive, to encourage the US public to appreciate an often neglected avant-garde.

Futurists aim at updating each and every art’s methods, aesthetics, tools and vocabulary. For literature, Marinetti promotes the principles of “paroliberismo” (1912), rejecting syntactical, grammatical and even punctuation rules. Futurist poetry counts amongst its leading figures Aldo Palazzeschi (1885-1974), the author of L’incendiario (1913), and it transforms into “aeropoesia” (1931) with the second generation futurism. Balla also takes an interest in fashion, realizing in the early 1910s several sketches for futurist clothes and hats, while in the field of graphic design and advertising Depero’s poster for Campari go down in history. In 1913 Russolo theorizes the Arte dei rumori and invents the correspondent “intonarumori”. Cinema, theatre, photography, ceramic art, culinary art: all fields of creativity are touched by the futurist wave.

Futurism starts as an Italian movement, but it spreads in in Germany, Poland, Russia and France, where poet Guillaume Apollinaire (1880-1918) joins it, amongst the others, joins it. Italian futurists are fervent interventionists on the occasion of both World Wars, and many of them end up irremediably compromising with the Fascist regime. Elsewhere, the movement shows diverse political orientations, often closer to anarchical, or Bolshevik, or more generally pacifist positions.