Painting as a denunciation tool: from the rise of factories to the consequences of the pandemic

What we can observe in some of the paintings done between the 19th and the beginning of the 20th century is a truth, perhaps a foreseen tragedy. Many artists portrayed landscapes with industrial buildings in which the colors used denounce the pollution caused by factories. 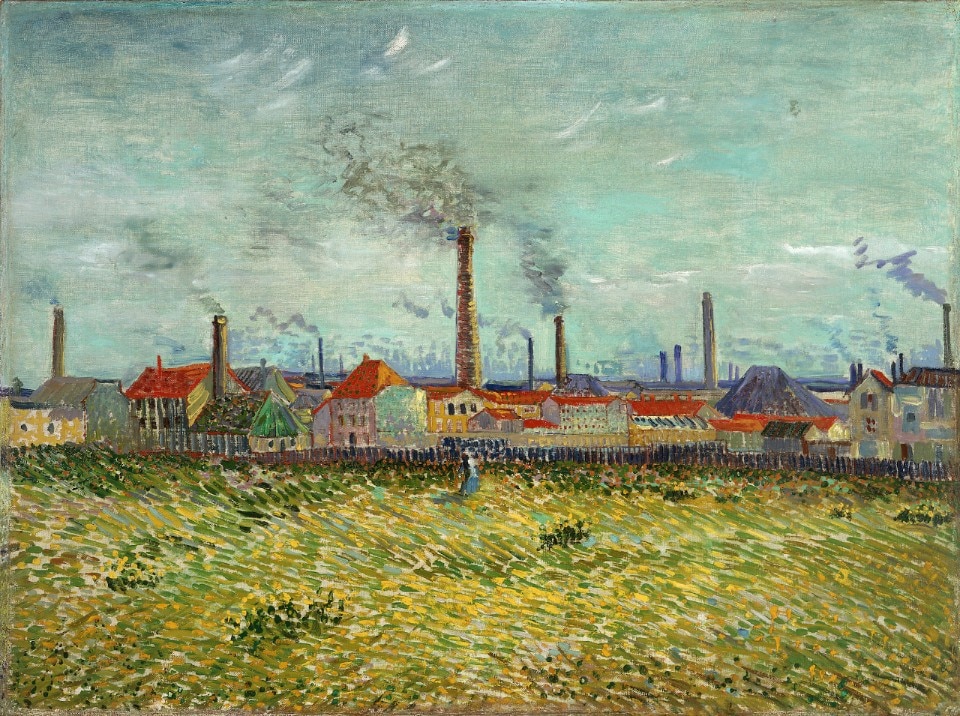 Since the beginning of the pandemic, the connection between COVID-19 and air pollution has been carefully studied by the entire scientific community.

Lethality rate and air quality are in close relation and dependence with the predisposition to pulmonary pathologies. As a consequence, they substantially affected the boom of infections occurred in the cities where the level of pollution is higher, due both to a greater circulation of cars, as it happens in the big European capital cities, and to the presence of factories.

When the first factories opened, the popular imagination of all the artists of the early 20th century started to appear on paintings. The reactions were varied, depending on the nations, and the cultural movements that were being established or becoming successful in those years.

In particular, the representation of urban landscapes characterized the Futurist artistic movement, which even included an apologia about it in its manifesto.

“Comrades, we tell you now that the triumphant progress of science makes profound changes in humanity inevitable, changes which are hacking an abyss between those docile slaves of past tradition and us free moderns, who are confident in the radiant splendor of our future”. A future that needed time and space, in which the trust in new technologies, factories, assembly lines, cars, and new means of communication was almost blind and, at the same time, marked the end of the old ideologies and techniques of the past. A glorification which took shape and form on the canvases of great painters such as Giacomo Balla, Umberto Boccioni, Vittorio Corona, Giulio D’Anna, Antonio Sant’Elia and many others.

Great Impressionist master Camille Pissarro employed gray landscapes to show us a new representation of the French countryside, which no longer was characterized by an uncontaminated nature with bright colors, iridescent waters and green and bright vegetation, but rather by sad hard-working factories that gave new colors to nature – dark greys, blues, browns, and greens were the nuances chosen by Pissarro. Light is dulled by dust, and in the water, the bright colors are replaced by grey and sad silhouettes of steaming buildings, as we can see in the painting The Factory at Pontoise (1873). With different techniques and different expressions, two other great artists such as Vincent Van Gogh and Paul Cezanne painted similar landscapes, too. The Dutch painter chose not to modify his color palette to represent the wheat field in front of the buildings in the painting Factories at Asnières, Seen from the Quai de Clichy (1887), while in another painting, also from 1887, called Factories at Asnières, he depicts the same buildings but from a different, more internal and close up perspective: the colors change and become darker, almost gray, sad, and highlight how the soot, which constantly covers the architecture and landscapes, manages to change reality itself. This can be interpreted as a criticism to this situation, anticipating the most contemporary science.

Read also: Medicine and science in the great paintings

The same opinion and denunciation come from Cezanne, who in his Factories Near Mont de Cengle (1870), shows us an almost desolate, dull and poor landscape that is completely different from all the works he did before. Here the colors become opaque, gloomy, almost static, without emotion.

Complaints? Anticipation of the future? All these great artists had as their greatest objective to represent and analyze not their truth or a subjective perception, but rather an absolutely concrete and true reality. These new architectures not only modified a natural landscape in which the surface was no longer marked only by the seasons or vegetation, but by new and artificial elements that represented the future, work, progress, science and technology, which evolves with the help of time. A landscape no longer limitless but delimited. Architectures and constructions in which space and time dictate their limits and the consequences of their function which today we realize, perhaps, that we must limit, modify and most certainly improve.