Medicine and science in the great paintings

An artistic excursus that shows us how these two important subjects, today very topical, have always been of high interest over the centuries, in literature as well as in paintings, from the Iliad to Magritte. 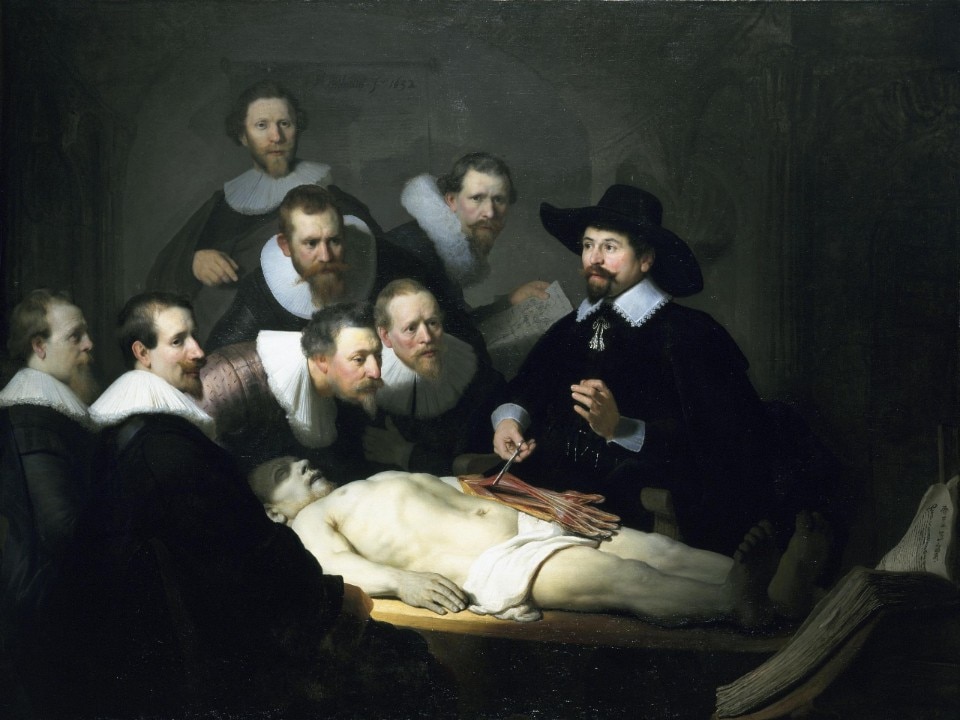 Science and medicine have always played a significant role, and today their function is more and more fundamental, almost crucial. The doctors, nurses and all the paramedical personnel together with the emergency medical technicians have been described as heroes, personification of Gods on earth.

“The wrath sing, goddess, of Peleus’ son, Achilles, that destructive wrath which brought countless woes upon the Achaeans, [...] for he in anger against the king roused throughout the host an evil pestilence...”. The opening words of the Iliad show us how, in the past, epidemics were interpreted as a sign of the anger of the gods, while today what we see as godly is science itself. Literature and art have always recounted everyday life and current affairs: wars, popes, kings, emperors, peoples and doctors.

Through different forms of narration, illness and medicine have been investigated, explored and recounted. One of the best-known artworks is perhaps that of Dutch artist Rembrandt Harmenszoon van Rijn, who was asked by the Amsterdam Guild of Surgeons to make a particular painting for them: one of the protagonists, the very elegantly dressed Doctor Nicolaes Tulp, is dissecting the left arm of a human corpse, whose body is placed almost parallel to the pictorial plane. At his feet, on a bookstand, there is a large volume – a manual. Around him are the students, equally well dressed, all portrayed showing different expressions on their faces, which are framed by the typical gorgets.

The movement that Professor Tulp makes with his left hand is almost identical to that of a painter holding the brush. This interpretation, which perhaps may seem rather imaginative to most people, has a pictorial evidence. In fact, by depicting the importance of the medical profession, Rembrandt also praised the work of painters.

A completely different painting, that however focuses on the same theme, is Jan Havickszoon’s The Doctor’s Visit, which is currently on display at the Wellington Museum in London. The painting is certainly very allusive and ironic. The doctor, who looks very sumptuous and elegant, is taking the pulse of a young sick woman sitting on a big chair. He ambiguously smiles at another woman who is handing him the patient’s sample of urine. A young boy, playing in a corner of the scene with bow and arrows, symbolizes Cupid, and on the exact opposite side we find a dog, which is a symbol of fidelity, looking at its owner. A very clear symbolism: the woman is pregnant.

Read also: From Canaletto and Monet to Morandi and Piano. The cultural role of the bridge

This theme wasn’t addressed only by painters coming from the other side of the Alps: Venetian artist Pietro Longhi, with a work that could also describe many current affairs happening all over the world right now, painted one of his most important works in 1752: The Pharmacist. “Lucky will be [...] Pietro Longhi, painter, a great and most individual imitator of Nature, who through his rediscovery of an original way of expressing men’s passions and characters in paint, has greatly added to the glories of the Art of Painting”. With these words, Goldoni shows his admiration for his friend Longhi, and exalts his work based on real life scenes and the attention he pays to everyday life. In fact, the painter’s works mostly depict everyday moments of the life of the Venetian population. The artist’s works recount the most disparate situations: from the salons of the nobles, to what happens in the office of a toothpuller, the life of lawyers and alchemists, without ever neglecting the humblest jobs like that of the laundresses. As a great master and excellent observer, Longhi does not leave any detail behind: for example he carefully represented the albarelli, the typical and ancient jars in which alchemists used to store various herbs and spices, and he also faithfully described the clothes of each character, allowing us to guess also and above all their roles within society. Wigs, purple-red shirts, simple but well-kept clothes like those worn by the woman in the painting, while the boy in the foreground, with the dirty and worn-out clothes, is probably a servant or a shop boy.

Over the centuries, many works of art have portrayed the medical and scientific world: in the 20th century, for example, French Charles Dufresne shows us with his symbolic painting what medicine is. The more famous Magritte told us his idea of therapists with a sculpture: a man who instead of a bust has an open cage with a bird inside. A world of fascination and hope, a world in continuous evolution. Rudolf Virchow once said: “Medicine is a social science and politics is nothing else but medicine on a large scale”. Today, this feels almost as a wish – that politics will continue to pay close attention to the importance of science and medicine.

Read also: The future of art