The exhibit that celebrates the 80 years of Van Abbemuseum stems from the notion that the 1980s were a turning point in the relationship between government, culture, art and the public sphere, and that we’re still experiencing the ripples that sparked during those years. 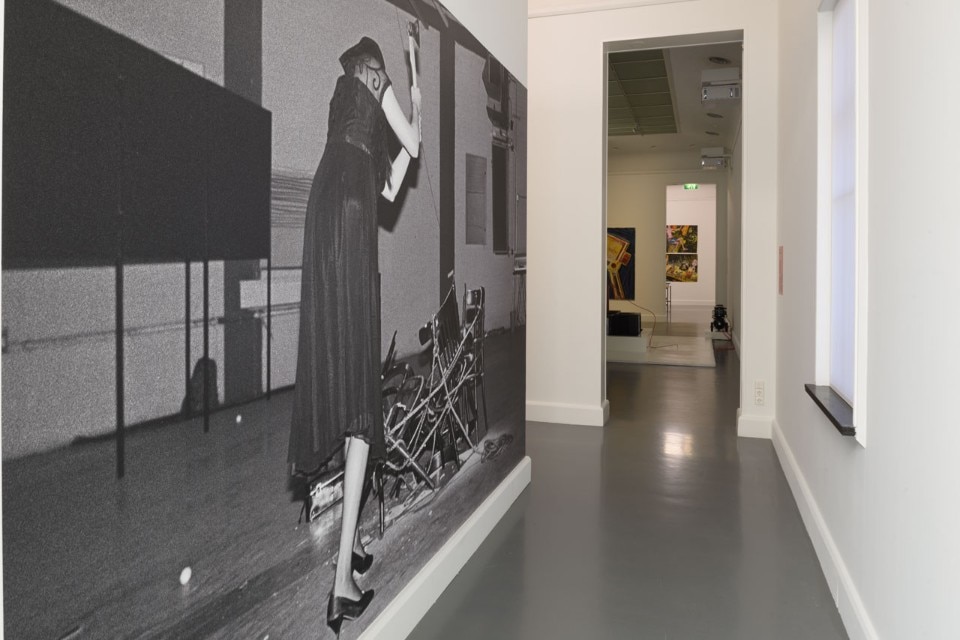 During the few years I spent in the Netherlands, the Van Abbemuseum was always my main excuse to visit Eindhoven, a city relatively removed from the Amsterdam-Rotterdam art loop. The original red brick edifice was built in 1936 by Alexander Kropholler, in typical Dutch Traditionalist style – that is, rejecting the expressionist Amsterdam trends in favor of minimal decoration. It sits by a small river, looking a bit like a stronghold of culture, just minutes away from the high-tech shine of Philips’ home city. Behind its stocky clock tower, the modern 2003 addition stands as a reminder of that very same shine.
Apart from housing one of the largest El Lissitzky collections in the world, the Van Abbe has developed a focus on the role of art, exhibitions and museums within society, with a very active research carried both locally and internationally. “The 80s: Today's Beginnings?” marks the museum’s 80th anniversary by tributing its own work as well as the collaboration with L’Internationale, a network of sister institutions from all corners of Europe. The intensity of the show is in line with a lot of Van Abbe's own production, but the span – as director Charles Esche, head of research Diana Franssen and curator Nick Aikens point out in a leaflet text – is too broad for one team to undertake.

The exhibit stems in fact from the notion that the 1980s were a turning point in the relationship between government, culture, art and the public sphere, all across Europe, and that we're still experiencing the ripples of the societal changes and cultural turmoil that sparked during those years.

In order to encompass the complexity of the topic, the show is articulated in six parts with as many curatorial teams. The Van Abbe’s own Franssen and Aikens present an overview of 80s Dutch counter-culture and black art in the UK, respectively, while the other sections were developed by other members of L’Internationale: Zdenka Badovinac (Moderna galerija, Ljubljana), Merve Elveren (SALT, Istanbul), Teresa Grandas (MACBA, Barcelona) and Fefa Vila Núñez (an independent researcher and collaborator of Museo Reina Sofia, Madrid). Visitors coming after July 2 will get a different experience than those attending up to mid-June, as the Slovenian chapter will be replaced with the Turkish and Spanish ones, in a program rotation that confirms how much substance the teams are showcasing for the show.

The first room of the Dutch chapter, dealing with squatter counter-culture, is dominated by a monumental 3-wall installation by Sandra Derks and Rob Scholte – a sort of gradual reverse-mitosis of 64 innocent-looking illustrations from coloring books that transform into one haunting psychedelic vision. That’s the main visual piece of an otherwise historiographic display, featuring a documentary video about Amsterdam squatters and lots of catalogues and magazines published by now established venues like De Appel. The second room is less book-heavy: it pays tribute to the vibrancy of international media activism in the Netherlands, showcased through video installations by artists like Raul Marroquin, Servaas and Nam June Paik. Dedicated to feminism, the third room also comprises an archive of published material, posters and an embroidered portrait of the Rebellious Pride Group by Patricia Kaersenhout, celebrating the pioneers of the black women movement.
Racial and cultural tensions regarding the UK’s colonial legacy are at the core of Thinking Back, the British chapter. Still featuring its share of books and posters, exploring the relationship between black art and cultural institutions, this tract of the exhibition has a sightly more rarefied feel to it than the others. Video installations by Mona Hatoum and an immersive documentary by Isaac Julien and the Sankofa Video Collective are displayed in between mixed-media installations by Keith Piper – his Black Assassin Saints (1984) and Body Politic (1983) are among the strongest pieces on show – and wooden cut-outs by Zanzibar-born Lubaina Himid. Black bodies are painted as sites of identity negotiation, violence and sexual desire, often speaking through text, but sometimes politics are expressed through the decolonization of modern aesthetics, as in the minimal yet violence-infused African Icons by Eddie Chambers or Rasheed Araeen’s Green Painting, a square in which the artist inserted photos of splattered blood from a sacrificial goat.
Although the aforementioned section was my favorite in terms of balance between strong visual pieces and archive material, the Slovenian exhibit – NSK: From Kapital to Capital – was the most surprising (albeit perhaps a bit cluttered). The two-room display is centered on the Neue Slowenische Kunst, an art collective initially comprising three sub-groups – Laibach, IRWIN and the Scipion Nasice Sisters Theatre – each active across different disciplines. The result is an exploded yet cohesive display of iconic sculptures, multiple manifestos (NSK later spawned even more groups: New Collectivism, the Department of Pure and Applied Philosophy, Retrovision, Film and Builders), taped concerts and music videos, all imbued in totalitarian aesthetics. Founded in the last decade of Jugoslavia, the collective appropriated a variety of aesthetic styles – from medieval paintings to album covers – and embraced a national(ist) taste over originality (as seen in IRWIN’s ongoing project Was ist Kunst, comprising a slew of figurative paintings and animal trophies). NSK's identification with a unique brand of Eastern Block flavor has its own critical-ironic register, which is eventually its most fascinating aspect.
This first phase of “The 80s” is already incredibly rich, venturing into negotiation of urban space, media experimentation, body politics and ideological aesthetics. The second phase will replace the NSK rooms with three other sub-shows that sound even more political: a case study of Catalan video art in post-Franco Spain, explored through the community-oriented works of artist collective Video-Nou (later Servei de video comunitari), an archive of Madrid’s politicized queer artist/activist scene (exemplified by groups LSD and La Radical Gai) and a documentation of Turkish counter-cultural movements responding to the government established after the 1980 coup d’etat (second wave feminist demonstrations, magazines, a free university).
As ambitious as it is, “The 80s: Today's Beginnings?” is a commendable undertaking: bringing together such a diverse array of European perspectives – in the widest possible sense, as Turkey and  Slovenia are rarely factored in, as well as British and Dutch colonies – is both timely and true to the Van Abbemuseum’s research tradition. A good way to usher in another 80 years of compelling work.
© all rights reserved