Villa Gontero, brutalist but not too much

In 1971 in Cumiana, Carlo Graffi and Sergio Musmeci created a bold and experimental residence, in which architecture, art and engineering come together in a single body in exposed reinforced concrete and Vibrapac blocks. 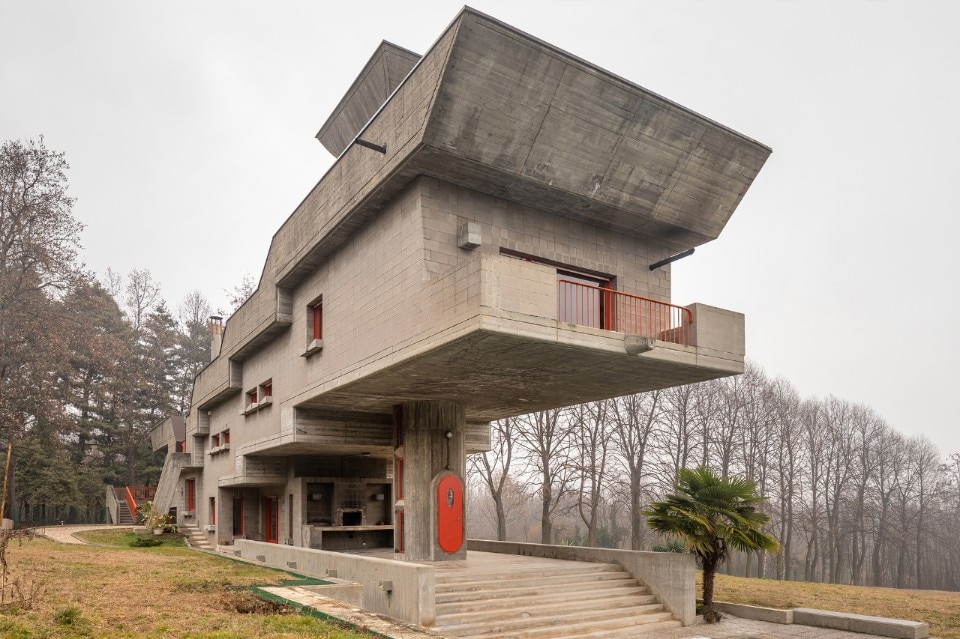 Villa Gontero (1969-71) was built in Cumiana, in the province of Turin, by Carlo Graffi (1925-1985). The architect is completely unrelated to the recovery of tradition, not even in that dreamlike and surrealist way practiced by the better known Carlo Mollino, with whom Graffi often collaborated in many projects like, among others, the competitions for the Palazzo del Lavoro of Expo 1961 in Italy (1949) and for the new Teatro Regio (1965-73), both in Turin. In these works, Mollino involves the Roman engineer Sergio Musmeci (1926-1981) in order to define the structural part. Graffi will commission to Musmeci the design of the structures of Villa Gontero.

The client, Riccardo Gontero, is a Turin entrepreneur, owner of the company Impresa Cementi Armati. The villa is published in L’architettura cronache e storia, issue number 224 of June 1974. Zevi, founder and editor of the magazine, who was among the first in Italy to focus on the experience of brutalism, surprisingly does not contemplate in this regard the work of Graffi. The text by Renato Pedio accompanies the photographs (most likely taken by Riccardo Moncalvo) without ever naming the adjective “brutalist”, or the noun, which in 1959 Pedio himself had emphatically used – under dictation by Zevi – to comment on the Marchiondi Institute by Viganò. Yet, paradoxically, it is likely that the instances that Reyner Banham had theorized and Bruno Zevi propagated in the previous decade weighed more on Graffi's imagery rather than Viganò’s.

The details of the villa in fact show a certain inclination in the use of visible reinforced concrete elements, or Vibrapac blocks, as well as of chromatically lit windows and of a certain mass of the composite elements. The Villa Gontero therefore fits into a changed context and aware of certain influences. But the architect also works together with an engineer – Musmeci – met on the Mollino’s construction sites and with a solid background, gained from the comparison with Pier Luigi Nervi and Riccardo Morandi, probably influenced by the suggestions dispensed by Graffi, but independent of the seductive references of brutalism.

Musmeci is responsible for a series of structural drawings of the villa, drawn up in January 1969, which accompany those of Graffi's architectural project. The building was completed in 1971: the housing structure is enclosed by two stepped structural slabs in reinforced concrete, spaced and supported by a secondary structure, and bordered on the perimeter by Vibrapac concrete blocks. In the central part, where the entrance is located, the building touches the ground and rises at different heights at both ends. The large cantilever rests on a circular reinforced concrete structure in which an iron spiral staircase is enclosed.

The villa reveals itself as the Italian paradigm of artisanal but highly experimental engineering, which leads its protagonists – Nervi, Morandi or Musmeci himself – to develop daring solutions solicited not only by the world of architecture but also by that of the arts, which in that moment and in that context were closely linked. At the same time, architects are attracted by the technical skills of engineers – as well as by the rhetoric used by the avant-garde to access this knowledge – and increasingly try to enter in engineering spaces. The praise and rigor of artifice, the ancestry of the Italian architectural and engineering culture, the contiguity with artistic researches, the experimental impulses of traditional construction companies are all hidden faces of an imagery that is brutalist, but not too much.