From war machines to social status symbols, the lift has radically changed what we expect from a building and the hierarchies that exist within it. 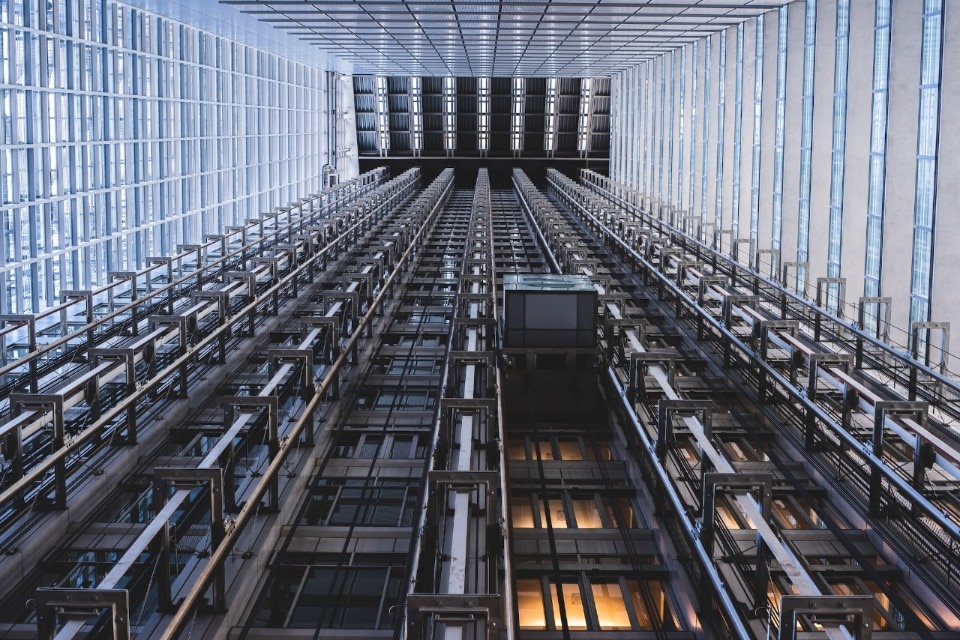 From Archimedes to Louis XV

Commonly considered a modern invention, vertical transportation devices – whether used to transport people or goods – begin to appear in the writings of Vitruvius in 236 BC, according to whom the Greek mathematician Archimedes designed a primitive lift driven by lifting ropes wrapped around a drum and rotated by human force applied to a winch. Later on, in the Colosseum appears a device operated by hundreds of men using winches and counterweights to transport gladiators and large animals from the underground route to the arena for battle through vertical shafts.

As we approach the modern age, these ingenious devices - almost always a unicum used in important public architecture - began to be adopted by the upper classes. Witness Louis XV, who had the so-called ‘flying chair’ built in 1743 to allow one of his many mistresses access to his private quarters in the Palace of Versailles. Similarly, a ‘flying table’ in his Château de Choisy allowed the king and his personal guests to dine without the intrusion of servants. At the sound of a bell, a table would rise from the kitchen below to the dining room with an elaborate meal, including all the necessary accessories.

The insight of Elisha Otis

But except for these sporadic examples, the development of lifts as we know them today only began in the second half of the 19th century with the industrial age, driven by the need for coal and timber mining. Here, vertical movement elements harnessed the power of steam, and early prototypes were also bought for sale to the public for various purposes. At that time, lifts were more of a tourist attraction than a means of transport – the lower floors of buildings were the most desirable because they did not require many stairs to be climbed. In 1823, Burton and Homer, two London architects, built and operated a new tourist attraction they called the ‘ascending room’, which elevated customers to a considerable height in the center of the metropolis. But the ropes on which they stood could be worn out or destroyed, and they were not considered reliable for passenger travel, which created a lot of mistrust in general opinion.

In 1852, Elisha Graves Otis invented a safety brake that revolutionized the vertical transport industry and architecture for centuries to come. In the event of a lift’s lifting rope breaking, a spring would activate pawls on the car, forcing them into place with racks on either side of the shaft and suspending the car in place. The industrialist gave a public demonstration at the 1853 World’s Fair in New York in which he raised a platform above a crowd, then cut the cable with an ax. “All safe,” he proclaimed as his safety device arrested the fall. Otis’s first signature lift was installed on 23 March 1857 at 488 Broadway in New York City, which closed after only three years because customers refused to accept it.

The attraction for hotels

As soon as they were patented, these new devices did not do well due to their high cost, but they found success as luxury items in hotels in major cities, from New York to Paris. So from being a hostile novelty, it quickly became a social status symbol: luxury moved upwards (in Haussmann’s Paris, for example, high floors were the least desirable), making way for a certain romanticism linked to the sky.

The Chicago Stock Exchange by Adler & Sullivan, built-in 1983, stands as a period symbol. The interior of the building was decorated with sumptuous organic designs inspired by flora and fauna of the prairie landscape, exemplifying Sullivan’s organic style. Ten large lifts with automatic signals provided superior service, hot and cold water-filled men’s restrooms on the main floor provided the ultimate convenience of the era, and electric lighting throughout the building’s interior culminated in one of the most technologically advanced offices in the world.

At the end of the 20th century, the lift became part of a particular architectural lexicon, born of the positivity of new building technologies: the so-called High tech which in England had been heralded by the headquarters of Willis Faber & Dumas in Ipswich in 1975, and with great resonance by the Centre Pompidou which Richard Rogers and Renzo Piano inaugurated in 1977 in Paris.

Another example of Rogers’ architecture is the Lloyd’s of London, completed in 1987. The 14 columns of lifts (12 of which are external) are evidence of a utopian component dating back to the time of Archigram and Cedric Price. The flexibility of the plan, the distribution systems, the services relegated to adjacent towers outside the central mass of the building was declared by Rogers as atout for a project tending towards the organic characteristics of a living construction.

The race for height vs. building standards

With the development of technologies and possibilities, the other element introduced by the lift is the race to the sky. Buildings touching the sky actually began to appear about thirty years after Elisha Otis had made lifts safe. Since then, skyscrapers have undergone profound transformations, both structurally and in terms of systems, which have sanctioned their growth in height and proliferation in all the world’s major metropolitan areas. Many consider the world’s first skyscraper to be the Home Insurance Building, built-in 1885 in Chicago by engineer William LeBaron Jenney, which was only 55 meters high. The famous Empire State Building, which was completed in 1931 and remained the world’s tallest skyscraper for more than 40 years, reached the “modest” height of 381 meters (431 meters if the antenna is included).

Today, the fastest lift globally is installed in the Shanghai Tower, the tallest skyscraper in China and second in the world ranking, after the Burj Khalifa in Dubai. It travels about 20 meters per second. Taller buildings have made lift engineering more complicated: the first problem is that a significant portion of the building’s footprint must be reserved for shafts. The Burj Kalifa in Dubai itself has only 57 lifts (16 less than the Empire State Building), but none of them can reach all 160 floors.

When designing the lifts for what could become the world’s next tallest skyscraper (the Kingdom Tower in Jeddah, Saudi Arabia) lift builder Kone wanted a record-breaking shaft that would run the tower’s full height, which is designed to be one kilometre high. He had to invent a completely new type of carbon fibre cable to do this.

Read also: The 10 (+1 unfinished) tallest buildings in the world