Four beach houses to dream about in the winter

Aiming to harmonise with the surrounding landscape, four houses experiment with linear solutions using local materials, and shield the openings onto the outside to ensure privacy. 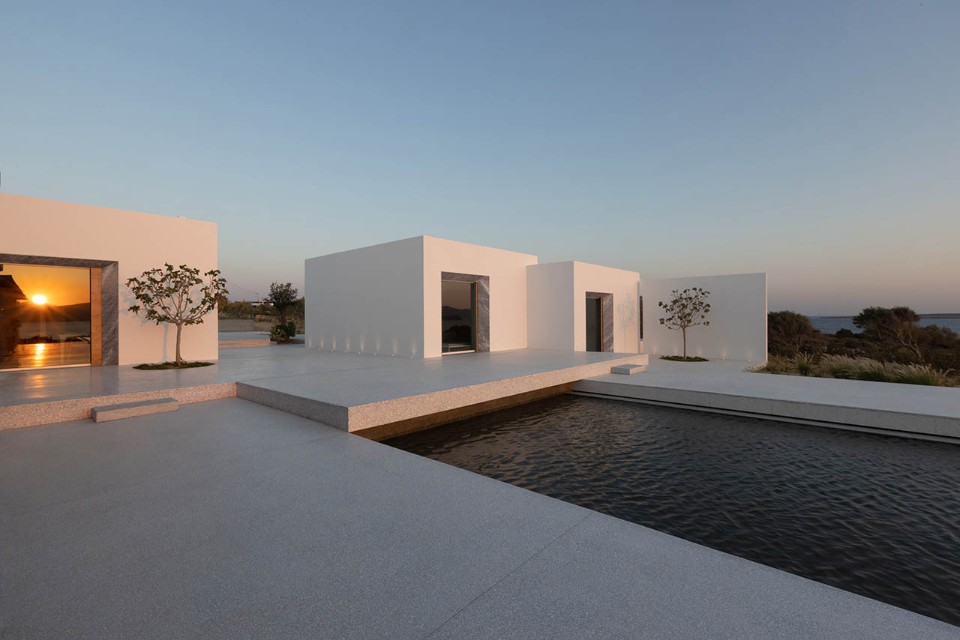 Until a few decades ago, designing a new beach house would not necessarily imply using a vernacular architectural language. Let’s think, for example, of the famous Cupola designed by Dante Bini for Michelangelo Antonioni in 1970, which used inflated concrete to blend with the landscape through a technique and a kind of volume that had never been experimented with before.

Today, the model of an architecture that breaks with pre-existing typological models, especially in the heavily overbuilt Mediterranean basin, no longer sets the standard. Under the banner of harmonisation, the experience of architecture by the sea is built by recovering existing structures or by creating new ones and integrating them with nature and the surrounding buildings.

By fluidifying the relationship between interior and exterior spaces, the home opens up to the long-awaited contact with nature, and at the same time lends itself to redefining the relationships of coexistence and visual dialogue through solutions that, if needed, shield the view and preserve privacy. The furnishings, for their part, do not choose the path of saturation, but rather make non-austere minimalism, often enlivened by craftmanship, a condition for highlighting the difference with urban dwellings. The second home thus becomes a laboratory in which to experiment the detachment from the acceleration of the ordinary, and the sea is an invigorating presence mentioned in a subtle, indirect way.

In the Algarve, Portuguese studio Atelier Data has worked on the renovation of an old agricultural complex called Casa Cabrita Moleiro, consisting of a small house, a granary mill and adjacent fenced areas for the animals. White and compact, the new structure features a horizontal distribution characterised by small raised volumes which give it a distinctive jagged profile.

As in a small fortress, the residence uses the interstitial spaces between the existing blocks to create new outdoor living spaces surrounded by walls, and only opens up to the outside in front of the swimming pool, making the space between living space and outside the heart of domestic life. The sense of protection and privacy is also reinforced in the bedrooms, which look out onto small terraces surrounded by a high wall, with a semi-circular opening offering a pleasant view of the coast. The hyper-essential interiors use a combination of white plaster and waxed cement on the floor, occasionally enlivened by wooden furniture.

The use of a local construction technique, the “pedra en sec” - a dry stone construction technique declared an Immaterial Cultural Heritage of Humanity by UNESCO in 2018 - inspired another project in Mallorca by Slovak studio beef architekti. The massive walls, also used with an eye to energy efficiency, characterises the façades, which develop on two different levels marked by an imposing rough concrete screed. Interspersed with large floor-to-ceiling windows, the façades can be closed by wooden shutters which transform the building into a block closed in on itself and project the shadow of the slats inside the house, creating a soft half-light. Once open, the house is transformed, opening up to the outside and to the relationship with the infinity edge pool in front of it, an invitation to relax and enjoy the view on the coast.

On the other side of the Mediterranean, in Paros, a swimming pool once again finds itself at the centre of the built space. Projected towards the west, and more precisely where the sun sets in August to offer a special opportunity for contemplation, the villa designed by Studio Seleirn Architects develops as an ethereal sum of white volumes which, positioned on overlapping terrazzo slabs, give the sensation of levitating on the ground and the surface of the water. The dialogue between the materials is enhanced by the use of Aliveri marble, which frames the windows, adding a sophisticated touch to the clean lines of the volumes.

Back to the swimming pool, the real protagonist of the space, a small intuition enhances its personality: covered with mirrors at the bottom, it echoes the colors of the sky, magnifying the experience of water.

In Apulia, not too far from Ostuni, architect Massimo Brambilla renovates a 1970s house which was the result of an expansion of a small trullo and built by superimposing adjacent blocks. The stratifications of the interventions have not been removed, as shown by the irregular profile of the windows, which have been maintained in their original state. The use of white, a code abundantly experimented with in local architecture, contributes to the uniformity of the spaces. On the outside, the uniformity of the lime binds the different volumes together, while on the inside it acts as a link with the Lecce stone and the concrete, also paving the way for the distribution of numerous brick furnishings, simple white volumes used between the living areas.

Embraced by the countryside, the residence enjoys the green space offered by the olive trees nearby, and turns a series of limiting spaces – the wooden portico replacing the previous concrete one, the swimming pool pleasantly developed as if it were a long corridor, and the private gardens of the rooms – into an opportunity to enhance life in close contact with the rural world.

Read also: The most loved projects of 2021