The only private residence built in California by the organic master Bruce Goff is also his powerful testament, a masterpiece of space and form. 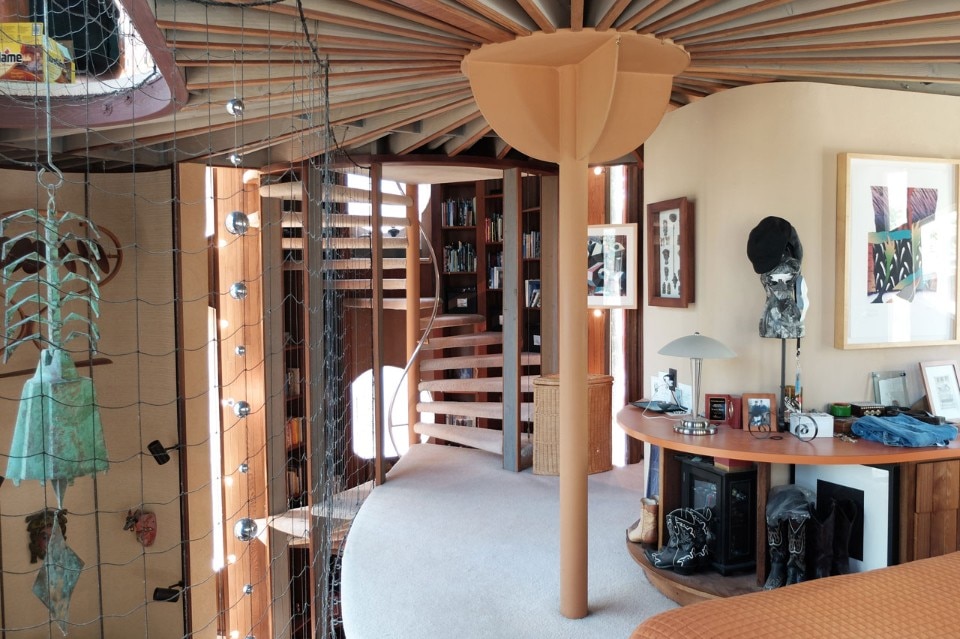 One of the most original architects of his generation, Bruce Goff built just few projects in California. One of them is also his last design, completed right before his death in 1982. Designed for aeronautical engineer Al Struckus, the family house in Woodland Hills in Los Angeles, is a tall cylindrical structure. From the outside, the house highlights with the futuristic-like windows, resembling both some alien creatures or pure beauty of natural world which was the main source of inspiration for Goff. One can enter the house through the huge wooden rotating door with the beautiful abstract stained-glass window in the middle.

In this gallery: the house for Al Struckus designed by Bruce Goff in 1982, Woodland Hills, Los Angeles
01 / 12
Share
Pin it

In his last residential design, Goff followed his vision of natural and organic architecture, drawn by his endless fantasy and formal magic. Since the late 1920s, Goff was a prominent architect of Oklahoma. Inspired by Frank Lloyd Wright and his conception of organic architecture, Goff went further to develop his highly expressive and personal style. Starting with Art-Deco and Art Nouveau influences at the beginning of his career, Goff adopted his ever-changing signature style during the 1940s. He built houses as a collage of materials and expressive forms. Dozens of his houses were built using natural elements, ready-made objects and dynamic decoration. One of his most famous projects, Bavinger House, completed in 1955 in Norman, was unfortunately demolished last year.

But Al Struckus house has better destiny. It is owned by passionate owner, who appreciate its architecture, oversaw by architect Bart Prince, the pupil of Goff, who completed some of his final projects. He collaborated with Struckus for the next decade after architect’s death to finish the house. Goff always created his houses as a symbiosis of general construction solutions and precise decorative details, as he did at Al Struckus house too.

The house has four floors. While the ground floor contains just an entrance area and small storage, at the first and the second floor, architect created a dramatic organic landscape. Curved floors and double-ceiling spaces resemble an artificial cave. It culminates at the top floor with the seating and relaxing area. Except the dramatic circular windows on the staircase, architect also designed a series of smaller windows in a dynamic grid pattern, which create a beautiful mosaic of light and space.

Sign up for our newsletter and get domus in your inbox
In this gallery: the house for Al Struckus designed by Bruce Goff in 1982, Woodland Hills, Los Angeles
01 / 12
Share
Pin it
Read also: a defining case study in the real-life experience of organic architecture by Jacques Gillet

The house is one of few Goff’s built project, defined by vertical form. Despite this, the house was very well constructed and already resisted few earthquakes. Goff made also some surprises in the design. The floor plan of the house, seen from above, is shapes into the form of the turtle. It documents that the nature was the biggest source of Goff’s inspiration.