Sara Antunes Mário Ferreira Arquitectos’ project in Mesão Frio, Portugal, sought to investigate what was unique in the building and landscape and to intensify it. 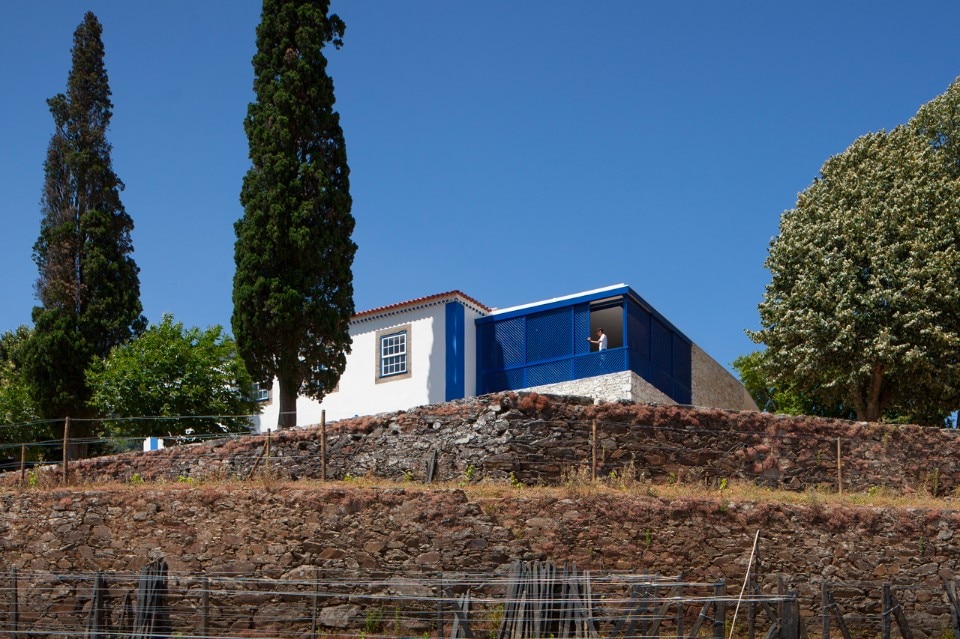 The main building of the “Quinta da Boavista”, is situated in a privileged location along the margins of the Douro River, overlooking the sinuous valley, sculpted by man over the centuries to produce wine. Besides the agricultural function, this wine-producing estate also serves the private use of a large family and touristic use as a guest house.
Sign up for our newsletter and get domus in your inbox
01 / 12
Share
Pin it

Sara Antunes Mário Ferreira Arquitectos’ project is the last phase of a series of additions that began in the 18th century with the construction of two buildings, the main house and the servants’ quarters, standing a few meters apart. This new project attempts to clarify the circulation between the different parts that have been united, and adds a new feature to the group by closing the L shape of the two original buildings set perpendicularly, with a new addition, changing the L into a U form, creating a courtyard with an open portico that frames the river view.

Rather than set a strong contrast between old and new, the intervention sought to investigate what was unique in the building and landscape and to intensify it. Despite major alterations in the spatial organization, the character of the interiors was maintained: stucco, wooden floors, handmade cement and glazed tiles, wooden trellis and a pervading deep blue that unites all the carpentries. In the new buildings architects’ approach was more topographical, relating to the landscape rather than to the existing volumes. The main addition is a continuation of the stone walls, whitewashed in the local tradition of differentiating particular moments in these long contour lines. The new living room is defined by three elements: the stone wall and staircase that redraw and conclude the exiting terrace, a veranda framed by slender steel columns protected by sliding panels of blue trellis, and a slab which is the continuation of the level of the upper terrace.
The other addition, a new staircase, is a white rendered cylinder that unites the corridors in both floors in the most fluid and direct way. Even if the spiral form and a circular skylight provide drama to the inside space, from the outside, the form tries to blend with the existing walls, and its cylindrical presence recalls the industrial wine silos that can be seen punctuating the landscape. The intervention also attempts to change the way the existing building was “fortified” against the exterior. New openings were made so as to encourage a more direct relationship with the outside space, which was given a separate character according to its inner functions.