TAMassociati was the curatorial team of the Italian pavilion at this year’s Architecture Biennale in Venice. It selected a few existing Italian examples, plus five projects by as many young design offices – made for non-profit organisations, to be built with a crowdfunding process that is still underway. 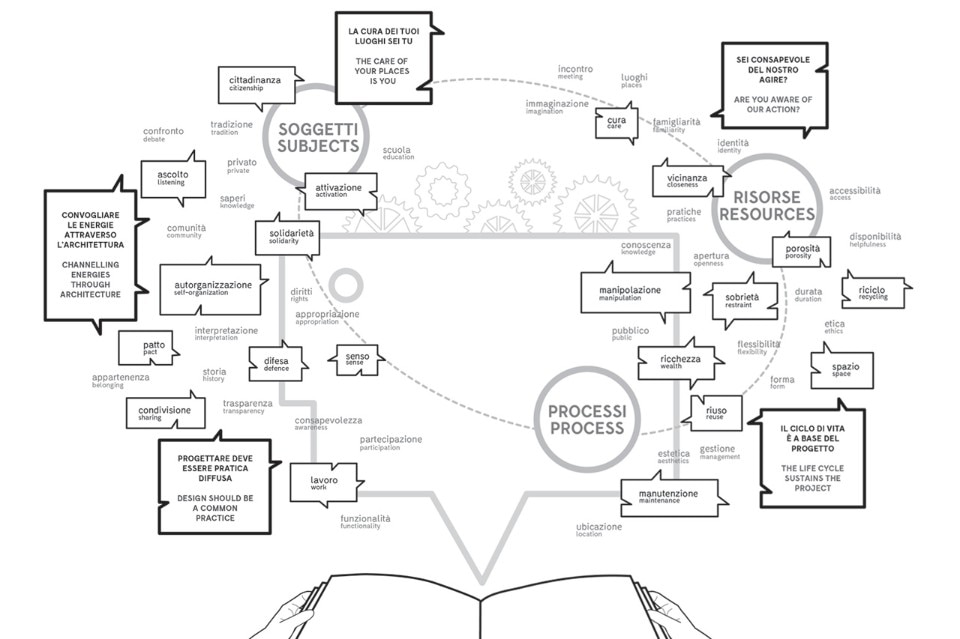 The curatorial team of the Italian pavilion, Massimo Lepore, Raul Pantaleo, Simone Sfriso, known for its architecture for non-profit associations, above all Emergency, selected a few built Italian examples in which they found analogous commitment toward the common good, a term found in their exhibition’s subtitle, “Taking Care: Designing for the Common Good”.

The precise meaning the team gives to the common good is design intervention in social and geographical areas where politics have been neglectful, guilty or absent – in suburbs, the countryside or towns. In its means and aesthetics, made mostly of recycled materials, the display at the Biennale gives the message that no materials or intelligence must go to waste on things that are not essential to civil life.

The result is a display with pauperous appearances that do not correspond with the team’s architectural work, which is interesting precisely for not looking that way at all. To the contrary, TAMassociati has contributed to debunking the common expectation that non-profit spaces need to look wretched, which is a 19th-century idea that confuses poverty with modesty.

TAMassociati, proactive as always, went well beyond such image by proposing the construction of five mobile buildings by as many young design offices – projects made for non-profit organisations that work in Italy. By doing so, TAMassociati has channelled the possibilities of the great visibility offered by the Biennale, a platform that has begun to contain concrete potential instead of being just a place of debate.

The production of the projects is financed by crowdfunding. As of now, mid-October, almost 100,000 euros have been raised, enough to build two of the five projects. The final aim, though, is to build all of them.

The project by Matilde Cassani with Emergency is called Articolo 10: a mobile day hospital and cultural mediation centre. It will be the first to be built and ready by the end of the Biennale on 27 November 2016. The project was entirely funded by the Italian furniture company Arper.

Second will be the To Moves project by Nowa with the Unione Italiana Sport Per Tutti: a structure for sports and education through games and physical activity.

The three projects still in need of funds are Campo Libero by Antonio Scarponi with Libera: a structure for legal matters, dedicated to civic thought, to be located in an area confiscated by the Mafia; BiblioHub by Alterstudio Partners with the Associazione Italiana Biblioteche: a mobile library that is also a place for socialisation; and Unità Monitoraggio Ambientale by Arcò with Legambiente: an awareness-raising centre for the environment.

Although the latter three might seem less seductive, they are no less important. Companies and individuals, come forward! Your help is needed. Here the link to the crowdfunding.