The German pavilion at the Venice Architecture Biennale is centered on immigration – one of the greatest upheavals in contemporary history – through the Arrival City, a narrative category borrowed from journalist Doug Saunders’ research. 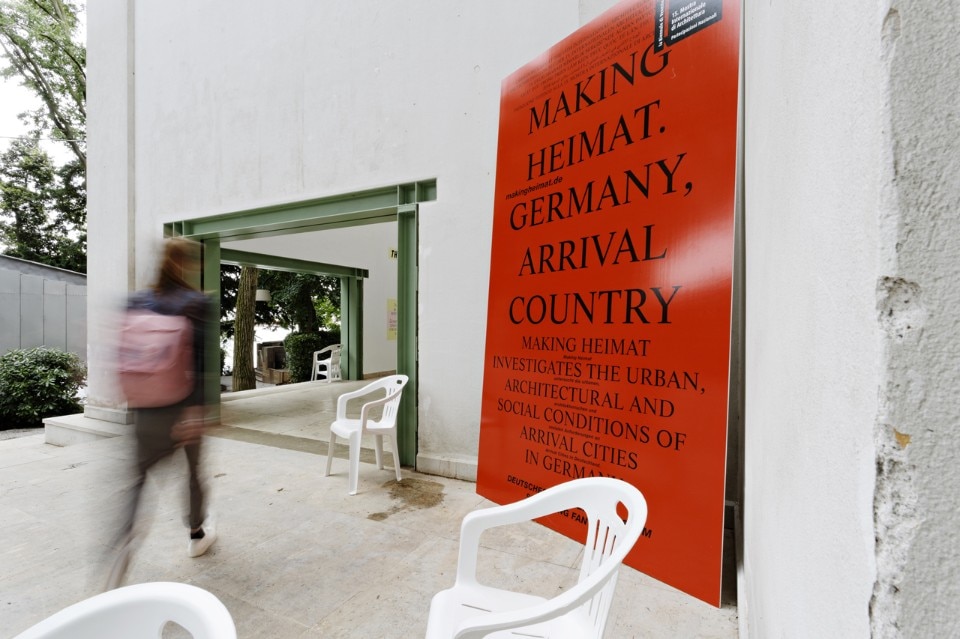 There are many possible interpretations of Reporting from the Front, the theme of the 15th Venice Architecture Biennale 2016. It can be read in humanitarian terms, as many have done, or as a journalistic metaphor.
Seen in this latter light, Reporting from the Front does not bind the designers-reporters to a specific social sphere. Rather, it formulates a dual recommendation regarding method. Yes, you must dive into the context and depict it faithfully but you must also maintain that due distance which in the most difficult contexts allows independence and a balanced view.

The installations in Venice can be observed from the standpoint of precisely this contrast between empathy and distance. Particularly soly the many that are drawn up on the front of migratory phenomena. Indeed, given the upset in geopolitical equilibriums of recent years, whatever Mediterranean hinterland we look at today – European, Middle Eastern or North African – we encounter spheres that call on architecture’s help: building shelters for refugees, rethinking primary reception centres oran cushioning the urban shocks triggered by a new influx of foreigners.

Germany is a prime player on this stage. It is the country that went strongly against the trend in the rest of Europe when, in the autumn of 2015, it gambled on the possibility of transforming immigration – one of the greatest upheavals in history – into an economic lever that could counterbalance an otherwise inevitable population decline in coming decades. Can German cities withstand the impact? This is the question asked by “Making Heimat”, the pavilion curated by Peter Cachola Schmal, Oliver Elser and Anna Scheuermann of the Deutsche Architekturmuseum in Berlin.

The exhibition centres on the concept of the Arrival City. That is to say, the first place where migrants come into contact with an urban space. The Arrival City may be superimposed on an existing district without altering its topographical appearance or it may become a new physical presence, taking the form of settlements such as slums and favelas.

This narrative category is borrowed from journalist Doug Saunders’ research. In his book Arrival City, 2011, Saunders mapped our different immigration areas – from Neukölln in Berlin to Peckham in London, Cidade de Deus in Rio de Janeiro and Dharavi in Mumbai. Although his term does not refer to a single country, the fundamental idea is that the Arrival City will, in the future, be increasingly key to German urban development.

Assisting with the creation of the pavilion, Saunders suggested eight arguments that convey the concept via pragmatic observations containing a touch of the Jane Jacobs. Among other things, the Arrival City is “A city within a city”, “Close to business”, “Informal” and “On the ground floor” – definitions highlighting self-organisation, solidarity and entrepreneurial ferment, as too a constant swaying between legality and illegality. Only one of the arguments is prescriptive in nature: “The Arrival City needs the best schools”. The others seem to suggest that observation – from the due distance – is the step that must precede every judgement or project.

Saunders’ slogans are clearly printed in the spaces of the pavilion in the Giardini, which, notably, has no doors or internal partitions. In fact, all the existing ones have been knocked down. This decision, symbolising the intention to open boundaries, must be recognised as sincere and praiseworthy. Nonetheless, it is hard to be captivated by the noble gesture in the face of a clear disparity between the architectural representation and the geopolitical reality.

In truth, the Germany that is today flaunting its welcoming virtue is the same country that for years ignored the appeals of its Mediterranean neighbours, including Italy and Greece, for greater coordination on the migrant issue at European Union level. The task of finding a solution to the refugee crisis was in no way helped by what Heribert Dieter, an analyst of the German Institute for International and Security Affairs, described as “German solipsism” in the Italian magazine Limes. Berlin’s attitude remained unchanged until the situation became unsustainable, finally paving the way for the generous monetary incentive offered by Brussels when asking Recep Tayyip Erdoğan’s Turkey to block the flow of people across the Aegean Sea.
The German Pavilion does not touch on these issues, and this perhaps provides a glimpse of its primarymain intention: to shift the immigration debate to a local setting. This is no secondary task as failing the reception challenge in Neckarstadt-West in Mannheim (47.9% foreign residents) and Bahnhofsviertel in Frankfurt (52.5%), given the growing pressure from extreme-right parties, would have international repercussions in the long term. However, choosing a patriotic dimension as the prevailing one, in the face of what are clearly problems of universal reach, also launches another message.

The Architecture Biennale, founded in 1980, is a product of the Post-Modern mood and of a widespread disillusioned/ironical opinion on the capacity of politics to counter market forces. Compared with the past, we are seeing a gear shift this year. However, but, if the climate of commitment and general lack of cynicism in the edition directed by Alejandro Aravena speaks of a re-found faith in the ability of architects to condition history once again, it also offers a vision of the world still firmly dominated by nation states.

Two decades ago, addressing the difficult choices linked to Serbia, Croatia and Turkey’s EU integration, the great historian John Pocock wrote: “These are not decisions to be taken by the market, but decisions of the State, and they are revealing clearly enough that ‘Europe’ is still a composite of states whose historically formed interests give them non-identical attitudes towards the problems of ‘Europe’ and its borderlands.” Published in 1994, a time of infatuation with the theories of Francis Fukuyama on the end of history, Deconstructing Europe claimed that history still had work to do. It also warned that this was not “a cheering prospect”.

Adopting cautious phrases such as “Tolerating semi-legal practices can make sense”, the German Pavilion seems to be speaking primarily to its own citizens. The curators of “Making Heimat” must, however, be praised for their ability to respond to Reporting from the Front with rigour and ambition – while elsewhere similar arguments are dominated by contradictory or sanctimonious interpretations. Visitors to the Austrian Pavilion can take home large colour posters portraying the inhabitants of Vienna’s new reception centres in domestic poses. Yet, even the sweetest scene immediately becomes jarring when related to what is happening on the borderfrontier with Slovenia or at the Brenner Pass. At the Alpine borders, every suspension of the Schengen Treaty at the Alpine borders inflicts harsh blows on the framework of European integration.
© all rights reserved