SunnyHills and the matter of business

Clad in a wooden lattice and bringing to mind some of wooden Kawamata’s sculptures, the  building by Kengo Kuma defies the observer to guess its content and proposes a challenging business model. 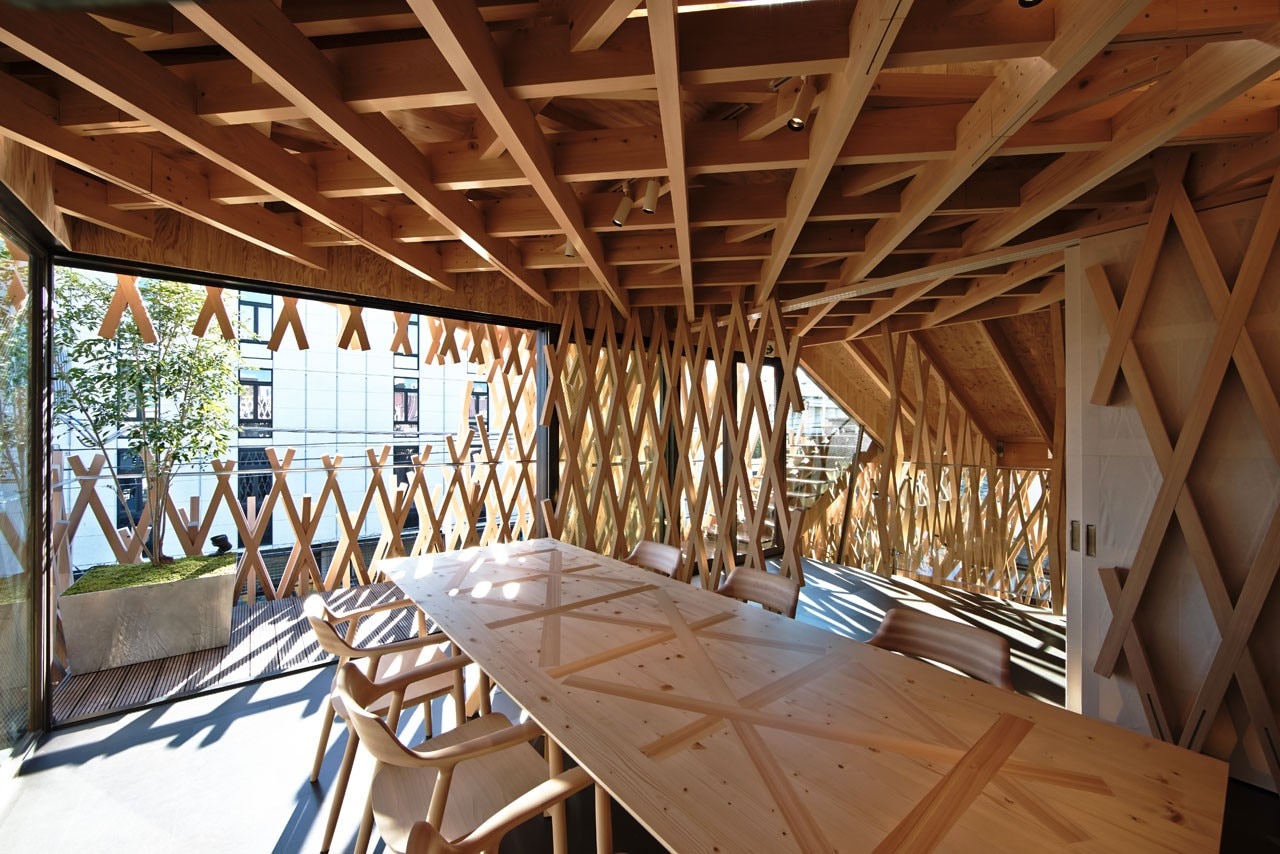 Located in the neighborhood of Minami Aoyama, just few blocks away from Herzog & De Meuron’s iconic building for Prada, there is a new building by Kengo Kuma that makes us rethink two things: matter and business culture.
Everything has potential to be marketable in a culture highly shaped and driven by consumerism as contemporary Japan. This is not a new phenomenon and dates back to Edo Period, when a consumer society emerged in order to support the large amount of military people living in what would later become Tokyo. Recently we have heard about the winning bid to host there the next Olympic games in 2020, under the idea of ‘hospitality’ as  the new thing to export from Japan. It is true that anyone could or is already using such ideas as a flag to claim a new fad, but it is also true that in Japan the concept of ‘O-MO-TE-NA-SHI’ (the Japanese word for hospitality) has been present for long when it matters to business.

Clad in a wooden lattice and bringing to mind some of the sculptures of Japanese artist Tadashi Kawamata, the building set in a corner defies the observer to guess its content. When walking by the quiet street, there is a man standing at the front door inviting people inside to enjoy a cup of tea and a piece of pineapple pie without any charge. People are free to buy a cake without any compromise. The story sounds like a challenging business model but indeed it seems to works. Everything is rooted in the encounter of ideas of two entrepreneurs. One is a Taiwanese, running among other businesses a brand of pineapple pies to support farmers at his hometown and activate their economy. The  other is a Japanese architect seeking to make of his practice something more ‘democratic‘ according to his words. Both are simple but very honest approaches to their own businesses.

Almost one year ago we published an interview with Kengo Kuma about Wisdom Tea House. This time we had a chance to interview him again regarding his latest project SunnyHills, in which he incorporates previous material lessons on wooden structures and is gradually refining his building techniques.

Rafael A. Balboa, Ilze Paklone: 2013 was a relevant year for Kengo Kuma. We saw the culmination of many ideas already acquired in previous buildings. Specifically regarding your latest project for SunnyHills, there are good resonances between the business model of your client and the way you are making architecture at this point. The building somehow reminds us the wooden sculptures of Japanese artist Tadashi Kawamata.

Kengo Kuma: I think that the business model of the client is very unique, because it was started not because of money. The client already had a big business. Their hometown is one of the poorest areas in Taiwan, but a good place for pineapple plantations. This is a reason why they started their pineapple cake business there. Pineapple cake itself is very typical and popular sweet in Taiwan. They wanted to do it differently, using only the very best pineapples from their hometown.

I felt sympathy to their business model and I decided to accept the project. It is very similar to what we are doing with architecture. The goal of our architectural design is also to activate local places within Japan and to show the quality of materials. If I can show the essence of those materials, it can be helpful for local business. Not in the short time, but in the long‑term.

Regarding the artwork of Kawamata, it is always something put on the existing structure. What we did for SunnyHills, is rather a very structural solution. Kawamata’s work sometimes looks more like decoration.

Rafael A. Balboa, Ilze Paklone: The ancient Chinese book of philosophy ‘I Ching’ invites us to embrace changes as part of our human nature. The work of Kengo Kuma is precisely in constant change, even when there is a line and logic connecting each project there is a clear will to evolve the use of materials. How do you conceive these ideas in this project?

Kengo Kuma: The beginning of these project series is the one named Cidori, which started in 2004. For that project we studied the joinery of the traditional Japanese architecture and found a very interesting system from Hida Takayama [a town in Gifu prefecture famous for its carpentry tradition]. Cidori system is  very democratic, originated from children’s toys. Anybody, even kids can participate in creating three‑dimensional structures with this system called Jigoku Gumi.

We constructed a small pavilion by cidori system in Milan (2007) with my students. I was very satisfied with the project. I wanted to go to the next step to build not only temporary small pavilion, but a permanent building. Then we did the GC Prostho Museum Research Center in Kasugai (2008-2010). It was a big challenge to design a 10m high building with cidori system. I wanted to create also a more dynamic space. We changed the perpendicular system to set it diagonally for the Starbucks Coffee project at Dazaifu Tenmangu (2011). The challenge was to create and control the spatial flow by the structural system.

To make architecture and to construct a building in the 20th century was also considered a professional thing of the big contractors and construction companies. The wooden construction before the 20th century in Japan was a very open system. Anybody could build with it, because the wood is a simple material to cut and join. I would like to go back to the traditional democratic construction system. Cidori can be the best example of such system.

Kengo Kuma: This is very similar to the idea of gothic cathedrals and the sum of vertical structural elements that create flow in the space. Renaissance and Modernism are basically very static systems. We are inspired by the gothic space. For SunnyHills we developed further the idea of the diagonal structural system that we already used in the Starbucks project. Structural engineer Jun Sato proposed an interesting solution to support three floors of the building. It was adapted from the Jigoku Gumi joinery system. Traditionally shoji screens are fixed by Jigoku Gumi system without nails and glue. So far it had not been used for constructing a building.

Jigoku Gumi system is a superposition of two layers [of slender wooden sticks], tightly fixed together with a third layer. It is similar to weaving or knitting. Adapted Jiigoku Gumi system is structurally much stronger than the one we used in Starbucks, which supports only the roof. And that is an adaption and invention of Sato san. In this sense, there is an encounter between traditional system and very contemporary structural system.

Rafael A. Balboa, Ilze Paklone: You have just mentioned the democracy of this system, however in traditional Japanese architecture sometimes the most elevated knowledge used to be the hidden. Take for instance the carpentry codes contained in the ‘Shomei’ (design manuals kept secretly by carpenter families). Sometimes the refinement of techniques in Japan have lead to very undisclosed knowledge, but it seems that you are trying to make use of that knowledge again.

Kengo Kuma: Originally to drink tea was part of a very democratic culture. Eventually tea masters tried to make their own sect. The development of wooden construction has the same history. Originally wooden construction was very democratic. With time this kind of flexible system was becoming a hidden secret. ‘Shomei’ and sukiya carpenters tried to enclose their knowledge and wisdom.

The base of my practice is modernism. In the 20th century Japanese traditional wooden buildings were taught and learnt by a different system. Togo Murano, Isoya Yoshida and other sukiya masters had their own sect and separated systems. They liked that kind of refinement. I want to break it, I think it is my goal.

Rafael A. Balboa, Ilze Paklone: Recently Japanese government is fostering again the construction industry to use wood in urban areas. Taking advantage of this policies, which other aspects are you aiming to continue experimenting with this material?

Kengo Kuma: Before Meiji era Tokyo was an amazing and dense mega-polis of wooden buildings. The weak point was fire and earthquakes. Because contemporary technology can make the wood inflammable and stop deterioration, we can bring back wood to the big city.

Japanese culture and mentality were influenced by the use of the wood in the city, by the softness of the material and human scale of construction. By the 20th century, when concrete came to Japan, this kind of mentality was devastated. The price is loss of our own identity. If I can bring back the wood to the big city and can become the main material again, we can recover the mentality of Japan again. It is my dream.

Rafael A. Balboa, Ilze Paklone: Wood has positive qualities and constraints as any other material. What about the aging of the material?

Kengo Kuma: I think aging of the wood is a good thing. It is very natural. Aging is a value in Japanese culture, we appreciate the aging of the material. Natural aging makes the city more mature. It is a very sophisticated mentality. The mentality of the 20th century was appreciation of the new. What looked new, was good. For SunnyHills we exposed the wood. It is treated to be inflammable. The life span if that material is more than twenty years. Step by step we will see different colors of the wood. I like that kind of play. SunnyHills can show the beauty of aging, I believe.