From the Alcantara, workshop IN/ARCH 2013, which was held last October, comes the opportunity to open a public debate on the entire water body of the Sicilian river Alcantara. 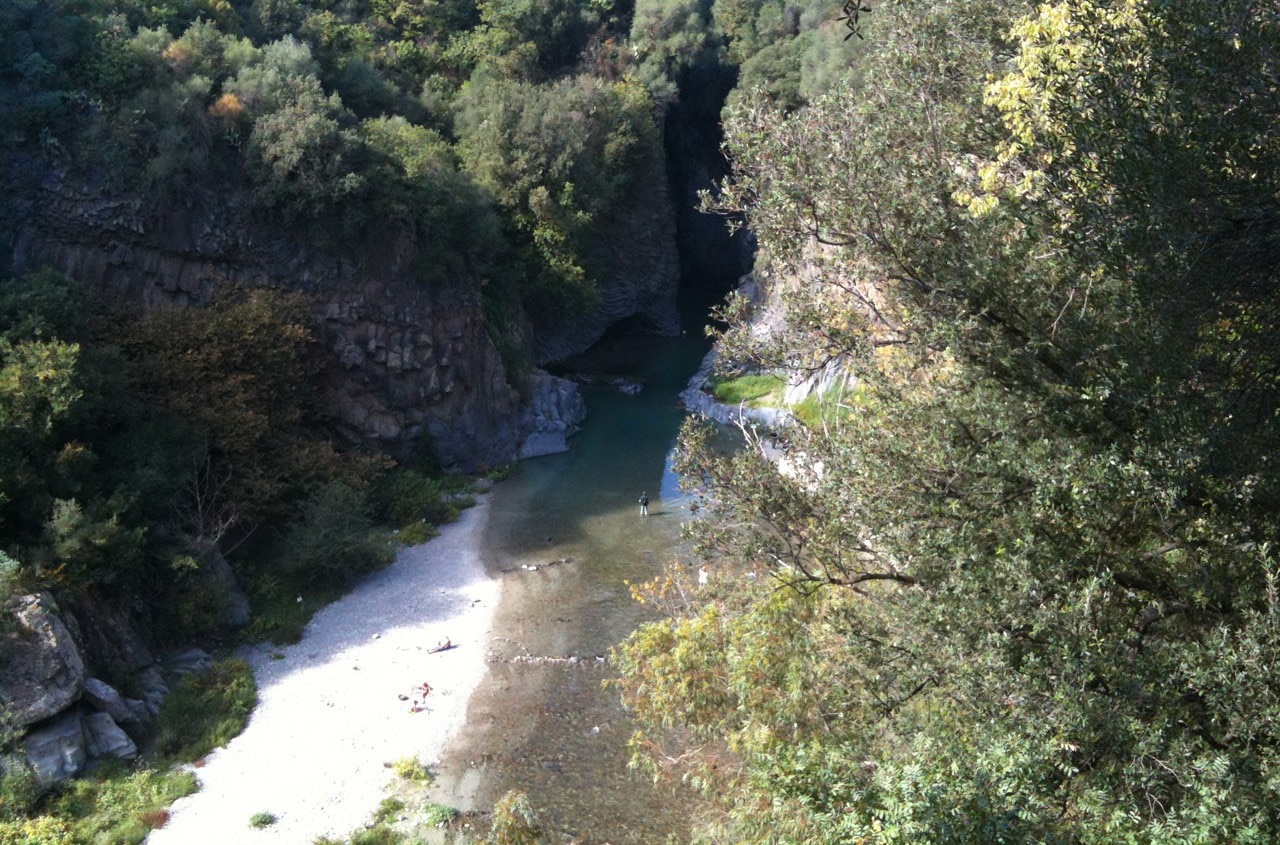 At first glance, it is not a typical Sicilian landscape. At the heart of the Alcantara zone is a deep, narrow canyon that runs between rock walls up to 25 metres tall.
Here, however, the stone is not the sandy-red colour of the American desert but the shiny anthracite hue of lavic rock, invaded by the lush vegetation that, far past the gorges, surrounds and for long stretches completely hides the water. Beyond the river is land occupied by renowned farms and vineyards, villages with fairytale castles such as Castiglione di Sicilia and historical landmarks such as the small Cuba and Frederick II’s Jewish dye-works.
This beautiful and little-known landscape was recently the focus of a design workshop organised by IN/ARCH Sicilia with the Architectural Composition Workshop 2 of the University of Catania and the Ente Parco Fluviale dell'Alcantara. With its unique formula, the workshop comprised five architects flanked by as many landscape architects and five groups of students, brought in as expert local consultants (having already worked there for months during their university studies). The architects Ketty Tamà, Francesco Cucchiara, Sebastiano Amore and Mariangela Campione (ACA), Giovanni Fiamingo (next build) and Andrea Caporali (Omphalos) were joined by the landscape architects Enrica Dall'Ara, Roberto Zancan, Taller De2, Marco Scarpinato and Dario Alvarez, respectively.
They all had a clear and determined core objective – to initiate a public debate on the landscape of the entire watercourse (which flows for 50 km from a height of 1250 metres on the Nebrodi mountains to the sea at the foot of Taormina in Giardini Naxos); to provide the townships (local government and population) along the water’s edge with a number of different suggestions on how to safeguard and promote this outstanding common resource. Two initial observations were made: although the River Park was established in 2011, it still has no recognisable public route (one or more paths, marked and signposted) following the whole course of the river and the main access to the river remains that created in the 1960s by an inspired local inhabitant who (so they say and with all the required authorisations) decided to facilitate the enjoyment of the riverside and gorge scenery by building a lift down and a route on high for sweeping views. Today, this private park (with an admission fee) forms part of the public river park but the relationship between the two bodies is largely unresolved and, most importantly, the access and private fruition is still the only one clearly visible.
This was an important occasion and deserved careful reflection, not only for the extraordinary nature of the Alcantara landscape but also for the importance of water in itself in the context of today’s world. Yes, these parts of Sicily have water but people must be aware of the need to maintain a both local and global vision, and reflect on the fact that we are talking about a primary resource for life that we have turned into something scarce – not because the quantity of water present on the planet has been mysteriously reduced (the amount of water has been the same for more than 300 million years) but as a result of human conduct that has radically changed the ratio of the different states of water (solid, liquid and gaseous) and the dramatic fall in the quantity of “good” water – needed for human consumption and to keep the ecosystems alive. That is why – on a global scenario that as well as oil wars now has a growing fear of water wars – developing the capacity for shared management (and support for life) of our primary common asset is a hugely important objective.

Students, landscape architects and architects started a debate and gave rise to a large workshop packed with ideas that generated a concrete abundance of visions based on different approaches but largely convergent proposals.

The Tamà and Dall'Ara project is attentive to existing historical presences and their regeneration with minimal interventions, as too the reinstatement of the waterways running transversally to the main course of the river. The project developed by Caporali and Alvarez displays a greater focus on architectural detail (the only one out of the five) and centres on a proposal to reinstate the existing railway along the river course and create a number of small stations featuring lavic-stone cage walls. In a more extensive project, Fiammingo and Scarpinato play instead on the desire to reconnect the Alcantara area to the landscape of Mt Etna, the Aeolian Islands and the Strait of Messina.

This would give the linear course of the river, lined with old towns and villages, a new system of transversal relations via specific proposals (a system of controlled flooding basins for the production of hydroelectric energy and phyto-purification, observation and launch sites for ballooning and paragliding, the restoration of the road-workers’ houses), aimed at opening up new views of the river valley and all its environs.
Slightly more streamlined than the previous one but offering great clarity and strong communication, the ACA and Taller De2 project centres on the restoration and conversion of the disused railway line to an infrastructure for pedestrians and cyclists: an eco-friendly infrastructure that is both scenic  and “productive” in that it reconnects the villages and farming areas, and makes the entire Park valley accessible and appealing to tourists, all with a small financial investment (as demonstrated by the simplicity of the project diagrams). This new movement would be driven by powerful jets of water installed at numerous points to draw attention to the waterway.
Cucchiara and Zancan adopted a different approach, choosing to forego drawings and get their hands dirty tracing and opening a route along a stretch of the river close to one of the best-known local architectural landmarks: the Byzantine Cuba. Their aim is to create installations, events and surprises, provide paths and rest places, and uncover views and scenic spots. More broadly speaking, they want to show that an almost zero-cost mechanism (by offering hospitality to one or more invited artists and creating an annual student workshop) could, in a short time, trace a new map and a new international attraction: an art park in an exceptional natural setting.

The ideas for the future of the Alcantara area are not lacking but they must now be shared with the local population and turned into a community project and priority.