In Barcelona, the Sagrada Família by Antoni Gaudí. 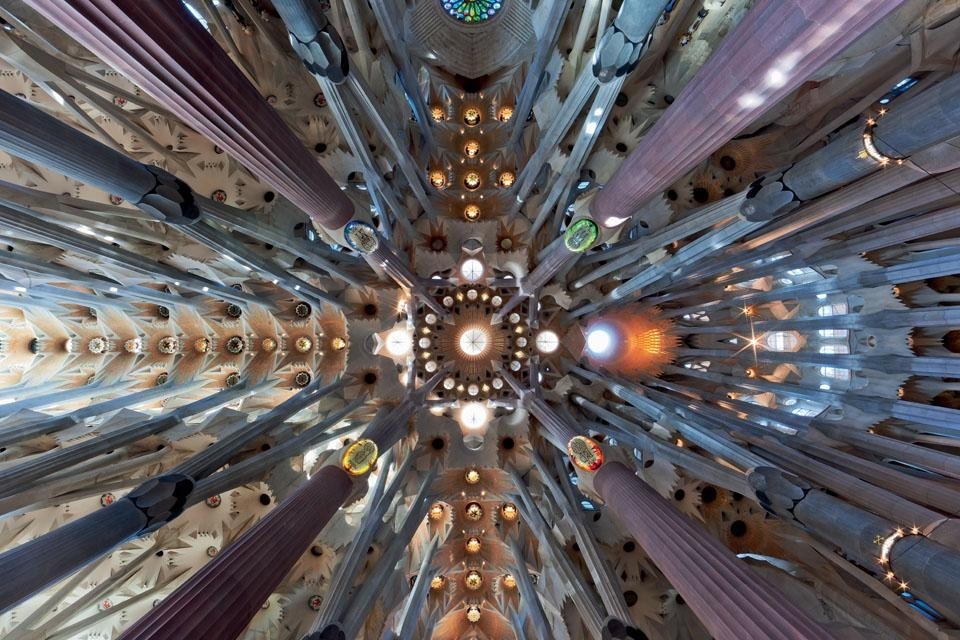 At the start of 2002, to mark the 150th anniversary of the birth of the architect Antoni Gaudí, Domus asked me to write an article on the controversial issue of the continuation of construction work on the Sagrada Família Church. Published in May of that year, my article explained that, in the early 1960s, while I was still at university, I had been one of the instigators of a manifesto against the continuation of the church, which received the unconditional support of all the intelligentsia of the day—from Bruno Zevi to Giulio Carlo Argan, Alvar Aalto and Le Corbusier. The reaction to its publication was overwhelming and we were labelled as Marxist heretics. That year, public donations broke all records and those in charge of building felt this gave them more legitimacy than ever, not only before God (which they had never doubted) but also before men of good faith. In 2002, the question was no longer whether the construction, by then at an advanced stage and which no one would dare demolish, should be continued but how it should be finished.

Upon the consecration of the church, I have been asked the same question again. Eight years have passed and my critical opinion has begun to falter. My doubts began when I saw the central nave being built from the street. The space seemed majestic and impressive. My rejection wavered all the more when Alfons Soldevila—an excellent architect, technologically advanced in tensile structures, galvanised steel and polycarbonate, and with whom I have worked on several occasions—told me that I would drastically change my mind if I had an in-depth knowledge of the works. He assured me that the Sagrada Família was the most important building of the twentieth Century and that he would personally show me around it. I accepted this invitation so that I could write this article from an informed standpoint. I have just toured the church from top (it is over 60 metres high) to bottom with Alfons and Josep Gómez Serrano, one of the project architects, and I must admit that I was dumbfounded.

The strongest objection to the continuation of the church has always been that we did not know what Gaudí—an architect who constantly improvised during his projects—would have done as his plans and models were destroyed during the chaotic pillaging of the Civil War and that any interpretation would inevitably be a betrayal. This is only half true. Gaudí developed three successive designs during the course of construction. He produced detailed plans and models of each one. The first—of the highly-adorned Nativity Facade and its Cubist inner front—is still hugely respectful of the Gothic language; the second is much freer and more organic; and the third is totally original, innovative and amazing—Gaudí in his purest state. He used this third design, which he considered final, although he would never see it completed in his lifetime, to make a 1:10 scale model, extremely detailed and which you could walk through. Yes, this model was smashed to pieces (and is now being reassembled in an archaeological operation) but there are excellent photographs of it and it has been reproduced with extreme precision. This reconstruction could be reproduced faithfully because, despite its casual appearance, the work was based on strict geometry.
Apparently, Gaudí was worried about the problems experienced with the La Pedrera facade and decided to adopt a strict geometrical structure for the church. The geometries are complex – hyperbolic paraboloids, hyperboloids and regular polygons spiraling in both directions to create the column shafts…but, once defined, they cannot be altered; and they can be reconstructed on a scale of 1:10 or 10 times their size. This is what happened in the nave, today virtually finished. If you see architecture as principally space and light, the interior of this church is Architecture with a capital A, exciting and grand Architecture that makes today's eccentric shapes and structures look like child's play. The parts that Gaudí left undefined present two fundamental problems. One is that although the people continuing the work got the basics right, they do not have Jujol's ability to interpret Gaudí in his own language, nor the capacity of Scarpa or Albini to convey him in their own language. As a result, nearly all the details not finalised by the master are off key. The self-promotion of the unassuming spiral staircases, the stainless-steel and glass handrails, the spotlights, the flooring, the keystones, the windows and all the decorative features in general is not on a par with the whole. However, they do not actually diminish the great virtue of the monument and should be relatively easy to change in the future.

Although the people continuing the work got the basics right, they do not have Jujol's ability to interpret Gaudí in his own language, nor the capacity of Scarpa or Albini to convey him in their own language.

The second and certainly more serious problem is that of finding contemporary artists capable of executing the Master's figurative designs. Gaudí wanted the facades to explain the Holy Story in pictures, the way medieval cathedrals had done. That was already a difficult demand by the start of the twentieth Century but the genius of Gaudí solved the problem on the—almost kitsch—Nativity facade with walls that fold into figures, many created from casts of real people and animals (George Segal 50 years earlier). The pitiful result of the Passion facade, commissioned to the sculptor Josep Maria Subirachs, shows the huge difficulty of pursuing the same course of action. The main Glory facade has yet to be built. Finding a contemporary artist anywhere in the world capable of taking on this task is the biggest challenge now faced. Figurative art is having a difficult time, that with a religious content even more so and an art that can express the Glory of the Resurrection is now extinct. Contemporary art has given us many crucifixions but no remarkable resurrection.
Let us go back to the start. How could we have been so wrong? This wonder would not exist if people had listened to us 50 years ago. It would have remained a ruin or it would have been finished by an in-vogue architect of the time. How many people would be visiting it? This church has never received any financial support from institutions and survives on donations made those who visit it, more than two million people each year, which translates into more than 25 million euros. It is being financed like a medieval cathedral and that is how it will be completed. I do not know whether it is the finest work of the last century but it will certainly be the greatest religious building of the last three. Oscar Tusquets Blanca
Born in 1852 at Reus, Terragona, Antoni Gaudí i Cornet attended the Escuela Superior de Arquitectura in Barcelona, graduating in 1878. In 1884 he succeeded Francisco de Paula del Villar y Lozano as architect in charge of the Temple Expiatori de la Sagrada Família, on which he worked uninterruptedly for the next forty years. From 1910, Gaudí gradually gave up all his other commitments to concentrate exclusively on the Sagrada Família. Run over by a tram on his way to prayers, Gaudí died on 10 June 1926. He was buried in the crypt of the Sagrada Família.
Share