From the pages of early-millennium Domus, the milestone in the career of the Swiss design duo which set a new paradigm for residential projects and integration within historical urban contexts. 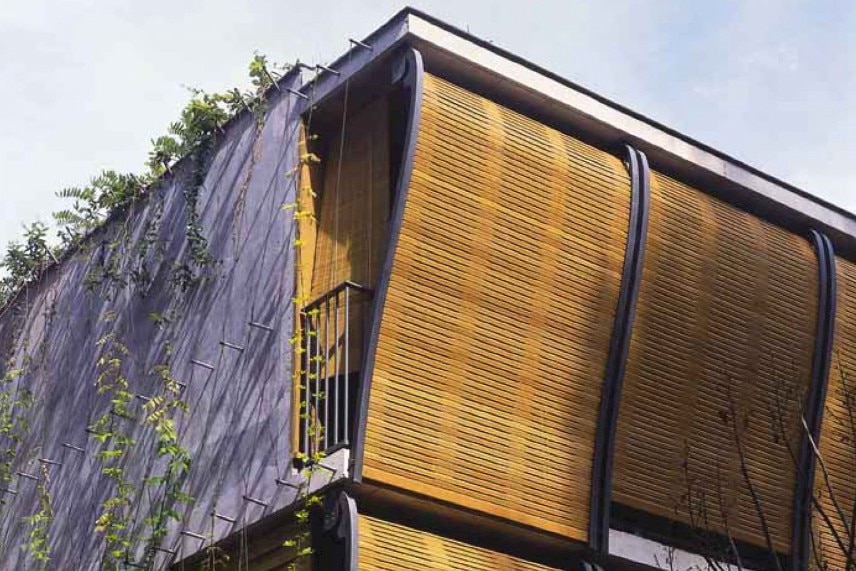 During the 1990s, the fame of the Swiss firm Herzog & De Meuron was consolidated worldwide thanks to the innovative and refined shapes of their projects, and — not a secondary aspect — by a particular attention to the dialogic insertion of a contemporary language within complex or delicate contexts, natural and especially urban environments. A fundamental chapter in this story is the housing complex realized in early 2000 in north-east Paris, completing the street front by modifying its outline, and inserting sinuous shapes and new materials into the heart of the block, almost immediately becoming a milestone in the history of contemporary housing. Domus published it in December 2001, on issue 843.

Ever since 1975, when Christian de Portzamparc designed Les Hautes Formes in Paris’s 13th arrondissement, France’s social housing agencies have been working to overcome the negative legacy of the barrack-like blocks that had previously characterised too much French public housing. But the individual agencies, OPAC and RIVP, have developed their own approaches. For example, OPAC’s Paris housing schemes, under the influence of their architect of choice, Antoine Grumbach, have for many years attempted to blend unobtrusively with their surroundings, employing traditional rather than risky architecture. OPAC is changing, however. Portzamparc’s protégé Fréderic Borel, who is best known for his exuberant and colourful work, begins building for OPAC later this year. RIVP, on the other hand, has for many years been more adventurous, as demonstrated by Portzamparc’s Les Hautes Formes. After Portzamparc, RIVP went on to commission Fréderic Borel and, most recently, Herzog & de Meuron.

Borel’s 1989 development on the boulevard de Belleville in the bustling 20th arrondissement is comprised of three imposing buildings that contrast sharply with their bland setting. Bold and expressive, Borel’s approach is sharply different from Grumbach’s, who aims ‘not to create objects totally disconnected from the environment’ but rather ‘a building or public space which seems in coherence with the place’.
Herzog & de Meuron, with their new design for RIVP, seem to have bridged the gap between the two approaches by preserving the urban fabric, while at the same time making challenging and engaging architecture that departs radically from its surroundings. Sitting on a Y-shaped plot in the 14th arrondissement, its three separate blocks fit tightly into an existing context of large-scale Parisian urban terraces. At its heart is a thoughtfully conceived courtyard, concealed from the street behind a pair of visually ambiguous facades.

One’s first encounter is with two independent dark grey metal facades. Sandwiched as they are between more conventional Parisian housing, they resemble, from a distance, Herzog & de Meuron’s Schützenmattstrasse building (1992-1993) in Basel. However, differences reveal themselves on closer inspection. The amount of light entering the apartments is controlled by adjusting individual aluminium shutters, fabricated from a corrugated grille based on the form of a curtain. When the building’s occupants push them open, they cantilever out over the pavement. In a closed position, they endow the scheme with a self-contained quality that has disturbed the more traditionally minded neighbourhood residents. Although disgruntled members of the Monts 14 conservation group have petitioned the mayor of Paris to have the shutters on the street fronts painted a lighter colour, a straw poll of local opinion taken recently in the area suggested that this was a minority view.

On rue Jonquoy the frontage is a simple, rather static upright rectangle, but just around the corner on rue des Suisses it is a clearly different situation. The facade is bent in order to break the monotony of the row. Consequently the element of folding that is animated by the tenants becomes a dynamic, spatial mediator between the fixed, small-scale folding of the grille and the large-scale distortion of the surface.
In terms of the individual apartments, one has been allocated to each floor on rue Jonquoy, while on rue des Suisses, one flat out of five slices through the entire depth of the building. After the austerity of the street frontages, a surprise awaits those entering the courtyard through a passageway – painted green and overlaid with glass panelling along one wall to produce deep liquid reflections of the passer-by – that pierces the block. The focal point here is a long, low-rise box, a close relation of Herzog & de Meuron’s Apartment Building along a Party Wall (1987-1988) in Basel, overlooked by repeated twin metal facades and a backdrop of exposed brickwork in a raw, behind-the-scenes context.

Brick and metal serve as hard-edged foils to the natural vibrancy of the wooden loggia and balconies: larch decking, rolling pine shutters and oak parquet. In addition, the smooth, serpentine curve of the shutters, canted slightly, contrasts with the angularity of the metalwork. The natural materials successfully impart a sense of warmth to the space, which is enlivened by a mix of climbing narrow- and broad-leaved plants and ornamental trees. Two detached houses in fair-faced grey concrete abut the flanking brick wall along the southwestern perimeter. Their simple cubic forms and pitched roofs relate to a gabled building on the northeastern border that predates Herzog & de Meuron’s intervention.

During daylight hours, the fine aluminium latticework shimmers as it interacts with the reflections on the floor-to-ceiling glazing behind it. Later, as a silvery dusk settles over the area, lustrous tones in the silver birch and concrete complement one another in the dimming light. And as apartments light up, glowing oranges and yellows filter through the grille, which assumes the aspect of a delicate fabric and allows the eye to probe the domestic tableaux. It is a striking discovery.
The complex also looks and feels good in the rain. In the case of the two-storey houses, water rolls off the roofs and streaks the smooth concrete walls. For a few moments, the courtyard becomes an open-air exhibition of impromptu action paintings.