A month of top-class creative mentorship for young talents who normally would not have access to it. These are Apple’s Creative Studios, this year also in Milan. This highly inclusive initiative engages with the suburbs and tells a lot about Apple’s current developments. 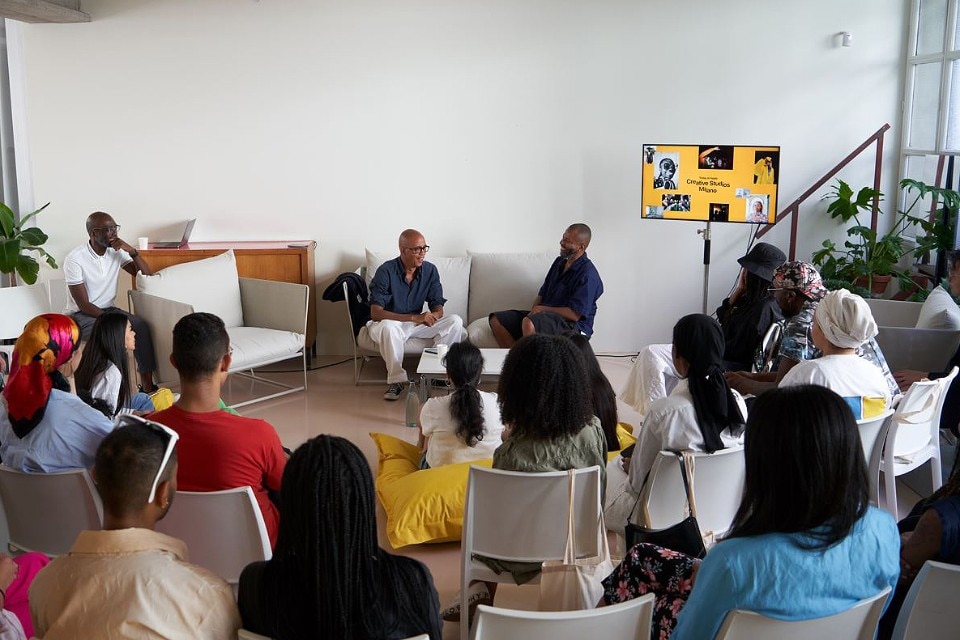 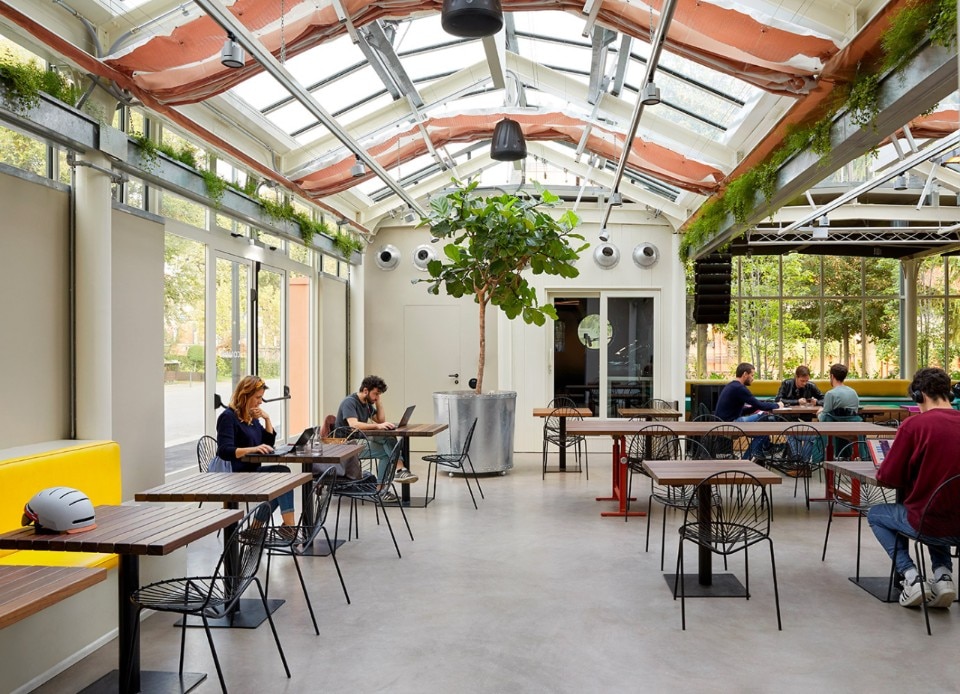 The stairs are the threshold. Three steps, which also serve as seats, separate the silence of the grey but airy courtyard from the excitement that can be felt inside the classroom, in the warm summer light. In less than a month, the large room that houses Apple’s Creative Studios in Milan has changed quite a bit – the corner with the water and tea is still there, as well as the organisation table which was moved a little to the back. Three large tables are now filling the formerly empty space, and there are scraps everywhere, mostly denim cloths, and the iPads Pro are being unhooked from the keyboards and carried around the room by young people – some standing, some sitting, all working.

This is not the usual, stereotypical downtown Milan palace – we are in Ortica, one of those “this was all fields once” neighbourhoods. This former working-class area, child of the post-war period, is wedged between the more famous Lambrate and the railway, and is quite popular (mostly in the fashion world) for its outdoor dancing platform, a Sicilian pastry shop, and little more. In this area, Milan moves at a less frenetic pace and there is still room for interesting and new things to happen.

The context chosen by Apple as a satellite location behind closed doors is in many ways the complete opposite – or complementary? – to Apple’s landmark in the city, the very central store in Piazza Liberty. Coincidentally, steps also play a key role in Foster & Partners’ project, just a stone’s throw from San Babila.

What are the Creative Studios?

Created with the aim of “supporting young people who face barriers to receiving a quality creative education”, in line with the brand’s closeness to the creative world and its mission as an enabler, Today at Apple Creative Studios debuted last year, first in Los Angeles and Beijing.

The beginnings of the project, however, can be traced back to before the pandemic, in London: in 2019, Today at Apple, the hands-on sessions organized inside the Apple Stores, in collaboration with Mayor Sadiq Khan’s office, launched Made in LDN, thus expanding outside the walls of Apple shops with a programme dedicated to creativity and aimed at young people from underrepresented communities.

This year, 13 cities around the world are hosting Creative Studios, now in its second edition, and in each one of these cities, Apple is working in a specific way with a different creative focus – in Los Angeles it is music, in London it is cinema, in Paris it is podcasts, in Berlin it is the radio. And each city involves a different partner from a non-profit organisation: in Milan, where the focus is on fashion, the partner is Afro Fashion, an organisation aimed at “demonstrating that Made in Italy is not a matter of colour”, as the founder and president Michelle Francine Ngonmo explains.

Ngonmo says that they received 112 applications to participate in the Creative Studios Milan, whose programme celebrates “diversity in fashion, art and design”. Only 33 talents between the ages of 18 and 24 and coming from all over Italy, but also London and Colombia were selected. The level is varied, as there are total beginners as well as small fashion business owners, continues Ngonmo. These people spent four weeks behind closed doors, from 10am to 5pm. During the first two weeks, they met a new visiting talent every day. The second part was dedicated to working on projects. “Initiatives like this should be part of our daily routine,” Afro Fashion emphasises.

The talents participating in the Creative Studios are not those you would find in one of Milan’s upper-crust – and very expensive – fashion schools, mostly attended by rich white kids. During a lecture, Aspesi’s creative director, the American Lawrence Steele, put it very clearly: “I have never entered a room with such diverse people in Italy”. Neither a school, nor a workplace. And he also added: “I’ve always wanted something like this, when I was young”.

Creative Studios Milano has three mentors: Gloria Maria Cappelletti, curator and creative director, Macs Iotti, founder and creative director of the eponymous agency, and fashion designer and creative director Edward Buchanan. Buchanan, who was born in Ohio, graduated at the prestigious Parson in New York, and worked on collaborations with Off-White and Bottega Veneta, has been using Milan as his base for the last twenty years. “The only difference between these people and all the others, is the opportunities they were given,” he explains with a smile – which immediately disappears as soon as he comments on how difficult – practically impossible – it is to find work situations like these in the fashion field. “The system does not incorporate individuals like these,” he explains. Or at least, it’s never happened so far.

Fast forward to the first days of autumn. The devastating July heat is now a distant memory and Milan is in full fashion week mode. This edition is perhaps a little different than usual, as fashion seems a little less untouchable in its ivory tower and a series of events in the city open the doors to experimentation, welcoming an unorthodox public – a little like what has been happening for years during the Fuorisalone. Among the protagonists, there is also Apple Creative Studios, still in the suburbs, but in a more well-known and up-to-date context – the former 1930s factory housing Fondazione ICA, not far from Scalo Romana and Fondazione Prada. The results of a month of work at Ortica are on display here.

Sahra Eich and Weiren Theo are two of the talents in Buchanan’s group. Alternating English and Italian, in a pidgin that acts as a lingua franca here, they bring me to the part of the exhibition space dedicated to Evry-1_Root for Everyone, the capsule collection of five headgears made by their team. Worn by models, they are shown together with preparatory drawings, paper patterns and a series of videos looping inside what look like old TVs. “Convertibility, upcycling and sustainability” are the basic principles of the collection, they explain. Each hat represents a meeting of cultures in the group: there is the US-Saudi hat, for example, or the one combining San Marino and India, and then Indonesia & Ecuador, Morocco & Albania, Kenya & Cape Verde.

“This project goes beyond fashion as mere clothing,” explains Sahra Eich. The headgears are transformed into cube-shaped seats, inspired by those in the Piazza Liberty Apple Store. Right there, a few days before the exhibition at ICA, there was a meeting dedicated to Creative Studios but open to all, especially to the unsuccessful candidates. This virtuous circle, which symbolically brings together not only the potential participants, but also the project spaces, makes the energies of the suburbs flow back into the more institutional context of the city centre. “It would be nice to continue the project in the future,” Sahra Eich tells me before we say goodbye.

Down in the metaverse

“At first, the metaverse was a bit scary for me. I chose it because it was new,” explains Elisa Bolzonello. The group led by mentor Gloria Maria Cappelletti is the most heterogeneous in terms of skills - it is composed of stylists, computer scientists and communication students - and it focused on creating virtual spaces with the iPhone and the iPad camera and populating them with outfits made with the 3D scanning app Polycam. “None of us had ever done it before,” explain Bolzanello and teammate Lidia Micieli, both fresh out of fashion school. “Although the result looks simple, there is a huge amount of work behind it”.

At ICA, Micieli takes me on a tour of Alter Space, first through the two-dimensional screens of the iPads, then into the VR space of the Oculus. I find myself inside an avatar, somewhere in a digital valley populated by other avatars and overlooked by huge human totems - they are the boys and girls from the course, I recognise them. The list of apps used to make all this happen is impressive: there is also Murf, an intelligence that was used to transform and vocalise a long text created by a portion of the team. “We wanted to overlay the human creativity with a mechanical and digital part”.

Eternal is the title of the video entirely shot, edited and post-produced on Apple devices by the third team, the one coordinated by Macs Iotti. The mission was to create some content for his agency’s platform and for the Roma(ntica) collection, presented at Alta Roma and based (once again) on upcycling. In the spaces of the ICA Foundation, the video is protected by a specially designed curtain. You watch it while lying on a cascade of cushions, and you listen to it with headphones, in an intimate and cosy environment.

The protagonists are the team members themselves – with Siri as guest star. “The goal is achieved if you come out with tears in your eyes after watching it,” Janel Lisa Amoah explains to me. Everyone here jokingly calls her Laura Pausini, because of a striking resemblance to the singer, “but also because we have a very similar haircut and because of my Romagnolo accent” she told me in July. In fact, at the beginning of the video, when the protagonists self-describe themselves, she introduced herself as Romagnola-Ghagnese, she/her.

“I would have wanted something like this when I was young.”

“To us, it has been an opportunity for exchange,” says Giulia Colli, creative department at MACSIOTTI, while describing the “joy in the eyes” of the participants and how the work during the Creative Studios was very similar to that of the agency, with tough commissions to handle.

The soundtrack of the video was entirely curated by Munir Yassed Mehammed, the musical soul of the group, who also has a role as a dancer. Besides his loose way of dancing, he impressed everyone with the precision with which he gave the composer the briefing. “I had a lot of references, and I explained them all to him. In the end, it worked out well” he tells me. MA satisfaction, that of Mehammed, his teammates and the other talents, which does not conceal the hope that all this, the fruit of a month’s work and a group of which perhaps soon only polaroids will remain, is only the beginning And it echoes the words of Lawrence Steele, when he said he would have liked something like this when he was young. An upside down come true.

Read also: Apple has turned a “hole” into an opportunity
Share