Nature at the centre of design: urbanature 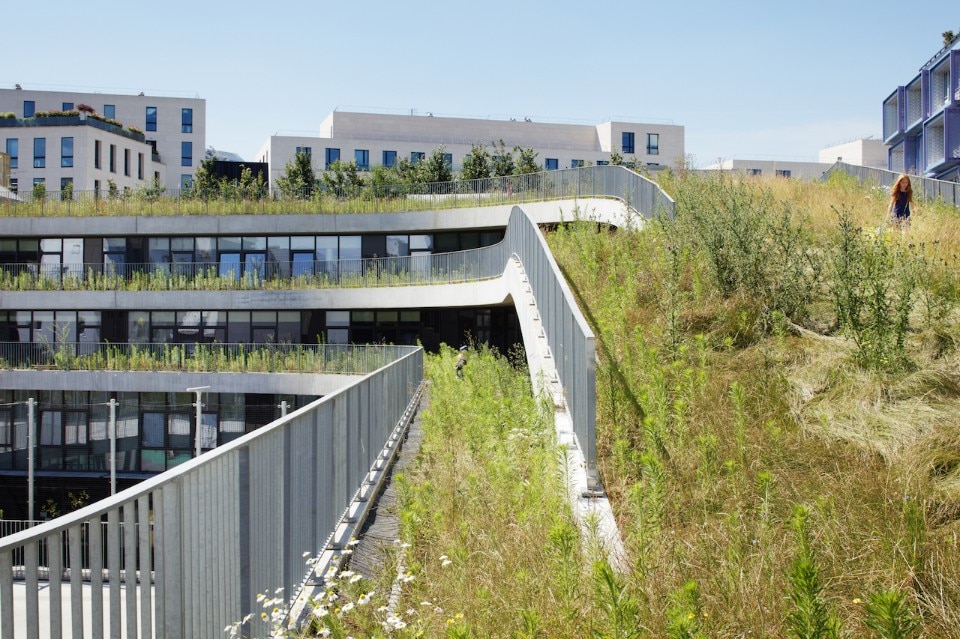 This article was originally published on Domus 1037, July 2019

Back in 1980, in Richmond, architect James Wines saved a stripe of urban forest and created an unforgettable storefront, all in a single move. He just cut the facade off the rest of the building and let the trees occupy the in-between space. Over the past 15 years, German architect Ferdinand Ludwig has crossbred engineering and botanics to test the capacities of “living plant constructions” in which the supporting structure is made of interconnected trees.

Trees are not the only thing these projects have in common. By making nature central to the design concept, you create a “hybrid reality”, a meeting point between nature and architecture. Urban life holds too many advantages for most of us to give it up and go “back to nature”. But is this really an either/or situation? Does it even make sense to juxtapose the two? We may not be able to recreate a genuine forest in the city but this does not mean that city and nature are incompatible.

There are ways of bringing together nature, architecture, and technology so that they can coexist and cooperate, and such work is already in progress. Joining forces with horticulturists, landscape designers, biologists, and climate engineers, architects are seeking to “knit” nature “into the very substance of buildings” (as Peter Cook once said). They are cultivating a new, urban nature, or urbanature. In fact, Wines’ project, unparalleled as it was, is not the earliest instance of urbanature in contemporary architecture.

A number of remarkable examples emerged in the 1970s, including a residential complex in Madrid designed by Fernando Higueras and Antonio Miró for the Military Housing Foundation (1975); Les Etoiles d’Ivry, a large mixed-use project by Jean Renaudie and Renée Gailhoustet built in 1970-1975 in the Parisian suburb of Ivry, and the Planeta (originally, Banca Catalana) building in Barcelona by Josep Maria Fargas and Enric Tous (1978).

ChartierDalix, Groupe scolaire da la biodiversité et gymnase, Boulogne-Billancourt, France, 2014. The school features an inhabited concrete facade where birds can nest and plants take root in the interstitial spaces between the blocks. The building’s green roof is inhabited by 114 vegetable species, 70 of which spontaneous

ChartierDalix, Groupe scolaire da la biodiversité et gymnase, Boulogne-Billancourt, France, 2014. The school features an inhabited concrete facade where birds can nest and plants take root in the interstitial spaces between the blocks. The building’s green roof is inhabited by 114 vegetable species, 70 of which spontaneous

WOHA, Kampung Admiralty, Singapore, 2014. WOHA sees the urban block as a hybrid mix of housing, services, medical centre and lush public park. The park is also home to several activities and provides opportunities for encounter to the seniors for whom the building was designed

WOHA, Kampung Admiralty, Singapore, 2014. WOHA sees the urban block as a hybrid mix of housing, services, medical centre and lush public park. The park is also home to several activities and provides opportunities for encounter to the seniors for whom the building was designed

Ateliers Jean Nouvel, Patrick Blanc, Le Nouvel KLCC, Kuala Lumpur, Indonesia, 2016. 208 climbing species grow in 1,000 containers distributed across the tower fronts (200 and 180 m). The positioning of the plants is based on the microclimatic conditions of the fronts, with the vegetation becoming denser for spaces requiring greater privacy

In the military housing, vegetation incorporated throughout the building compensates for the scarcity of trees on the streets and brings in the sensory abundance typical of Higueras’s architecture. A radical take on urban planning and social housing, Les Etoiles d’Ivry reflected Renaudie’s “biological” vision of the city as a complex, living organism. On a more individual scale, its garden terraces with vegetation flowing over the concrete balustrades blended urban and countryside feels. Direct experience of nature – regardless of the floor one lives on – came to- gether with an opportunity to connect with one’s neighbours.

As for the project by Fargas and Tous, it is nothing less than Barcelona’s (and, appar- ently, Europe’s) first vertical garden. Each of the building’s nine floors is hooped by a double belt of planters with a combined length of 3.8 km. Biologists Jordi Aguilà and Xavier Martínez have developed a pioneering hydroponic system to feed this hanging garden, while Everest Munné selected the species for a natural-looking green enclosure where different plants would keep it alive at different times of the year.

In a recent, particularly poetic example of urbanature, architect Takashi Fujino (Ikimono) placed his home, office and garden under a transparent eight metre-high roof. The concrete structure with large glazed openings provides “just the right amount of physical comfort, but is extremely generous in the way it engages all of the senses,” Fujino says. In spite of its modest size, the project points to many aspects of urbanature.

Alternative locations for nature in densely built urban centres with no space for traditional parks.
One well-known solution is the “vertical forest”, as in Stefano Boeri’s scheme in Milan where two residential towers provide the equivalent of a two-hectare forest on a 1,500 m2 footprint. Meanwhile in New York, an abandoned trolley terminal has been chosen as a future location of the world’s first subterranean park, the Lowline. Central to the project is a sophisticated optical system developed by James Ramsey (Raad Studio). The system harvests natural light and channels it underground as no electric lighting  would be good enough for the park to thrive.

Likewise, the Lowline opens a whole new field in horticulture. To define a vegetal palette that could survive underground, specialists from Mathews Nielsen, John Mini Distinctive Landscapes and Brooklyn Botanical Garden had to consider multiple parameters and model a complex topography for plants requiring different light levels. Successfully tested in similar conditions, the project is currently in planning stages. In the meantime, says Ramsey, the technology has also been installed in South Korea, and some cities in UK and Brazil have requested  initial concept designs for similar sites.

Can buildings be growth-friendly?
Different epochs have placed different demands on architecture. In a world where twothirds of the population will soon be living in cities, the demand is to provide conditions for accommodating life – not just for people, but “for living beings in general,” believes Frédéric Chartier, principal at ChartierDalix architects.

Their school in Boulogne-Billancourt boasts a thriving rooftop forest and a no-maintenance concrete facade with grooves, shelves, and niches for plants, birds, and insects. After the Boulogne project, the team is working on a composite facade system with soil and irrigation network sandwiched between structural and external layers; the latter has openings for plants to spread across the wall.

Which architectural forms work best for industrial-scale urban farming?
SOA Architects are seeking the answer at the intersection of architectural, social, economic, cultural, environmental and alimentary concerns, and claim that it can elevate farming from “a victim of urban sprawl” to “one of the structural components of the city”. Their design study included a hanging plantation slotted into a leftover space to act as a hybrid of research lab, street lighting and public art; or a tensegrity structure, compact and impressive enough to become a new landmark in a city centre.

Swedish company Plantagon teamed up with Sweco architects to create sample designs for its patented hydroponic food-growing system. Their first building in Linköping will put a vertical farm inside a double-skin facade and wrap it around an office tower, while French practice XTU Architects suggests using urban facades as photobioreactors to cultivate one of the world’s most valuable raw materials, micro-algae.

An XTU-formed consortium of laboratories and manufacturers has developed an ultrathin facade system that will grow micro-algae at 30% of the usual cost and double as a thermoregulating envelope reducing the building’s energy bills. The first biofacade is being installed on a residence building for students and researchers under construction in Paris.

Enhanced nature, engineered climates... and something else
Wishing to incorporate this capacity into the built environment, Klaus Loenhart (Terrain) started experimenting with plant-based “climate architecture”. The result was presented at Expo Milan 2015. Designed by a multidisciplinary team, the Austrian pavilion contained a forest where natural processes were enhanced by mist and fog devices so that the temperature inside was considerably cooler, while the production of oxygen equalled the output of a three-hectare forest.

A similar principle was later applied to the 12,000 m2 headquarters of the eco-responsible company Grüne Erde. Here, 13 patios with thoughtfully composed plant communities plus a few misting/fogging machines render conventional HVAC completely unnecessary. Sick leave in the company has dropped by 40%. Moreover, this production facility/showroom/office gen- erates more energy than it consumes. There is one thing, however, that Loehnart emphasises more than positive feedback. When vegetative performance is applied to architecture, we are no longer dealing with pure nature or pure culture; it becomes something else that transcends the nature/culture duality.

He is convinced that we need such places “because they open doors to new concepts of sustainability, but also move us beyond established categories in thinking ourselves, the society, and ‘the other’.”  It is a scientifically proven fact: contact with nature benefits physical and psychological health and increases creative thinking. We also know that, by accumulating diversity and facilitating interaction, cities catalyse new ideas, products, values... This may sound like piling one truism on top of the other – but let us actually put them together. What kind of breeding ground for creativity and innovation might the city become if we unleash our imagination and systemic thinking and manage (again, quoting Peter Cook) to pull “the vegetal towards the artificial and the fertile towards the urban”? This time, for real.

Anna Yudina is a journalist and curator, has written many books, including Garden City (Thames&Hudson, 2017). Her interests lie on the cusp of design, science, technology and art.

Opening picture: The roof-garden of a school complex designed by ChartierDalix in Boulogne-Billancourt (2014). Photo Takuji Shimmura