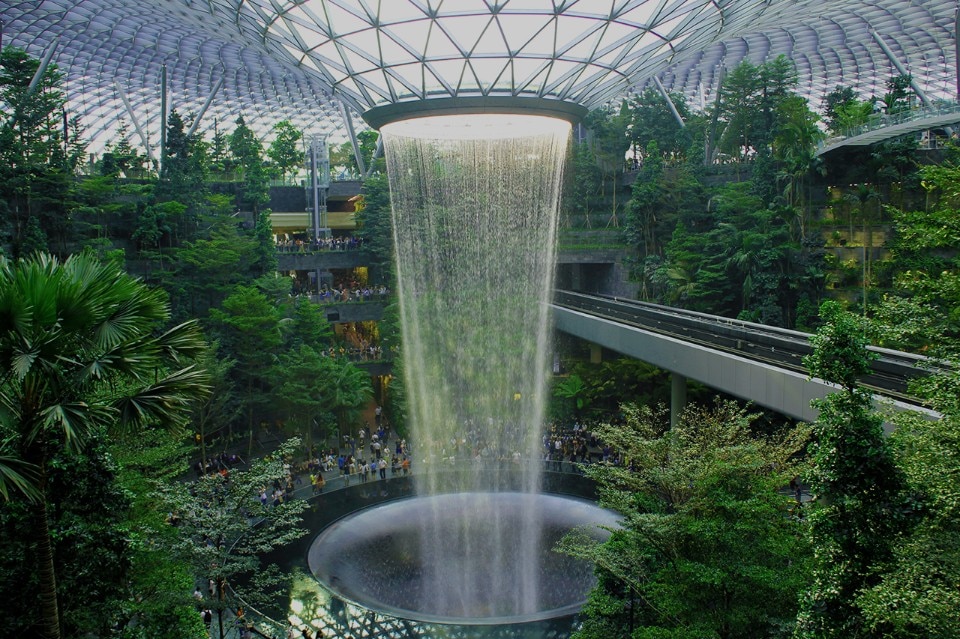 The green soul of Jewel Changi Airport and the Mapei solutions

For Moshe Safdie's ambitious project, Mapei products have been chosen for the installation and grouting of floor and wall coverings.

Discover all the Mapei products from the Domus Products catalogue

The Jewel Changi Airport, designed by Moshe Safdie in Singapore, has a green soul. The Israeli architect uses steel and glass to build the hub linking three of the four terminals at one of Southeast Asia's most important airports.

The new facility houses the Shiseido Forest Valley, a terraced natural paradise in which over 120 species of plants thrive in an artificially controlled environment. Here travellers can relax, stroll and admire the spectacular Rain Vortex, the highest indoor waterfall in the world. At the centre of a "donut-shaped" roof that measures over 200 metres there is a 40 metre high opening from which water falls freely.

Connected to the other terminals by pedestrian bridges and an elevated train whizzing through the vegetation, the building is supported by 14 columns and a ring beam, and extends for a total of 135 thousand square metres distributed over ten floors, five of which are basements and car parks.

The partner in this ambitious project is Mapei, with its solutions for laying and grouting floors and walls. The extremely high technical performance of Mapei mortars and grouts guaranteed safety and excellent results in all application conditions.

The cladding of the entire shopping area – which occupies seven floors – is made of polished marble slabs, laid with KERAFLEX MAXI S1 and grouted with KERACOLOR SF mortar. The same applies to the floors in the lift area of Terminal 2 and 3.

White Kashmir granite is used to clad the floors of the third basement floor, the lobby and the distribution areas of Terminal 1. The material was laid with KERAQUICK S1 high-performance cement adhesive and grouted with KERACOLOR SF.

We find Mapei products and systems for the treatment, installation and grouting of walls and floors also in some of the airport's bathrooms: KERAFLEX and KERACOLOR SF were chosen for the tiles, while the black granite slabs are laid with GRANIRAPID and grouted with KERACOLOR SF.

Mapei solutions were also selected for the exteriors. To clad the area in front of the Terminal entrance, granite laid with KERAQUICK S1 and grouted with KERACOLOR SF was used. Part of the granite tiles had to be laid and grouted on metal grilles: KERAPOXY and KERACOLOR FF were used for the part.