From Petra to Jean Nouvel: the legacy of Nabataean architecture

Two thousand years later, the fascination of the way of life of an ancient Bedouin people comes to the present day, amidst the contradictions of mass tourism and the ideal of a symbiosis between architecture and nature. 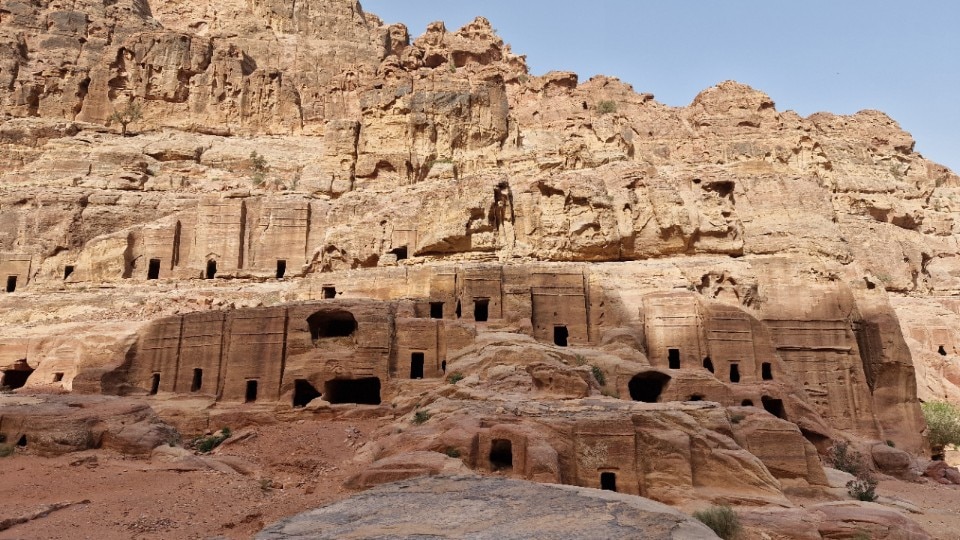 Only a long sequence of lamps, neatly arranged on the ground by the Bedouins, illuminates the path to Petra at night. These and the electric light of the city of Wadi Musa, which rises from the hills and lies in the sky, interrupting itself at the entrance of the long gorge that opens up at the end with the view of the Treasury. Al-Khazneh, as it is called in Arabic, is the symbol of Petra, with its monumental façade carved out of sandstone, made world famous in the late 1980s by the third Indiana Jones. In the film, it is the place where the Grail is kept.

Here in the evening, tourists arrive, pass among the reddish rocks eroded by wind and water, carved by man into the shape of a niche or a tomb; they sit on the sand to listen to the ancestral stories of the Bedouins, who tell them accompanied by ancient instruments, such as the single-stringed guitar, hidden in the darkness of the desert. Only the eye of the phone's camera – a Samsung Galaxy S22 Ultra –, not the human one, is able to distinguish their features in the darkness, capturing the image with the Treasury, forty metres tall and more than two thousand years old, as the backdrop to this unique theatre.

But Petra was and is much more than the Treasury. At its peak, on the great arid plain where today tourists crowd every day, under the sun, water bottle in hand, and Bedouins offer them lifts on the backs of camels and donkeys adorned with bright fabrics, lived 20,000 people. An artificial canal flowed and there was a large garden with a swimming pool. Its inhabitants were masters of water management and had built a system of dams, tanks, terraces and pipes with which to turn violent winter floods into a resource, and thanks to which not a single drop of rain was wasted.

Founded probably in the same years that Socrates live in Athens, Petra was the capital city of the kingdom of the Nabateans, a Bedouin people who made their fortune through trade. Today, the city is located in the southern part of Jordan. At that time, it was very close to the Incense Route, a network of trade routes that connected the Mediterranean with the East. Incense, which was used to perfume the dead, was a luxury good in antiquity, and trading it had made the Nabataeans rich.

Here in the evening, tourists arrive, pass among the reddish rocks eroded by wind and water, carved by man into the shape of a niche or a tomb.

It was King Aretes IV, who reigned until the year 40 and whose immense mausoleum is the Treasury, who transformed Petra into a monumental city: to him we owe a majestic 18 metres wide colonnaded road, a 5,000-seat theatre with an anti-flood system, terracing and a great temple, with columns probably almost twenty metres tall and surmounted by elephant-head shaped capitals. An Indian symbol, a tribute to their business partners: as scholar Ian Reynolds explains in the paper “The history and architecture of Petra”, along with goods, the Nabataeans shared ideas and styles coming from different cultures.

An obvious example of this are the two most colossal buildings in the city, both mausoleums, the Treasury, on the one hand, and the Monastery, accessed by an 800 step path. Both uniquely combine Mesopotamian elements with Hellenistic architecture, references to Greek mythology, niches – as found everywhere, carved into the rock walls, around Petra and along the gorge that gives access to the city. Behind both gigantic façades, is a single room for each one, disproportionately smaller than what is assumed from the outside, the ceiling burnt by the fire of the Bedouins who, over time, found shelter inside.

The gigantic columns masterfully carved into the rock by the Nabataean craftsmen were pure ornamentation, they supported nothing: as archaeologist Ziad Al-Saad with Faudi Al Wacked explains in the catalogue of one of the largest exhibitions dedicated to the Nabataeans, “The mysterious and innovative Nabataeans”, for the ancient Bedouin population “forms were freed from their function, and were used as pure decoration”. That architecture was a design inscribed on sandstone, a citation of other buildings, a simulacrum. At the same time, Nabataean architecture still represents an incredible example of the interaction between landscape and human presence.

Just outside the entrance to the city, on a hillock above the ticket office, is the new Petra Museum, a concrete parallelepiped designed by Japanese studio Yamashita Sekkei, a very modern and somewhat obvious structure that could be found in any corner of the world.

Nabataean architecture, on the other hand, has inspired two star names in design, Zaha Hadid and Jean Nouvel. The Domus 2022 Guest Editor takes the lesson of the ancient Bedouin people and adapts it to modernity in the Sharaan Resort in Alula, a small Petra in Saudi Arabia a few hundred kilometres to the south: an architecture, the Nabataean one, Nouvel explains, that has the rare gift of using abstraction, sculpting within the landscape rather than competing with it. “Our project celebrates the Nabataean spirit without turning it into a caricature,” the French archistar explains.

The House of Culture and Art in Amman, named after the current King Abdullah II, is a project by Zaha Hadid Architects, made public in 2010 and still under construction. The direct reference of this curved, white parallelepiped is Petra, both metaphorically – inspiration for an oasis dedicated to the performing arts – and in recalling to the process of erosion “that has shaped the contours of Petra”, and with which the ancient city has symbiotically: in this new building, ZHA explains, erosion articulates the public spaces, highlighting layers of sedimentation between fluid lines and outlining, by subtraction, the areas dedicated to performance.

Leaving the Treasury behind, amidst trinkets stalls possibly Made in China, and camels peacefully crouching in the shade, walking past the so-called façade street and leaving the theatre on the left, you reach a long staircase that climbs above the burial area; gaining height, it turns into a mule track.

Many Bedouins used to live in Petra and nearby Little Petra, with their tents and shacks.

It is hot, the wind beats down on the shacks, raising reddish dust from the carpets resting on the rock. The path ends right into the home of a Bedouin, who offers hot tea and coffee, water, orange and pomegranate juice or a can of coke for a modest fee compared to the breath taking view, overhanging the Treasury, his hut offers. “Italiano furbo” (Clever Italian), is the only thing he can say in my language.

He tells me he lives here and that on the other side, on a twin peak, I will find Cristina, an Italian woman who has decided to live here. Many Bedouins used to live in Petra and nearby Little Petra, with their tents and shacks. Now most of them have moved to a village north of the city, with water and brick houses, built by the Jordanian state, which also has schools and doctors.

The same scenery runs alongside the highways, where every now and then a camel crosses; once dotted with tents, now you only see brick houses for more than a hundred kilometres, heading south to the red desert of Wadi Rum.

Lots of cars in the car park at the entrance, like a weekend shopping mall. The Martian-like desert, which has always been inhabited by the Bedouins, has been transformed into the last tourist frontier of a world that global warming is pushing towards global aridity, a taste of the future in the form of a luxury adventure with Martian-like references.

With the money coming in from the capital city Amman, terraced villages are being built on the land rented by the Bedouins, some with tents that inside have little to envy a five-star hotel in Dubai. But the most popular dwelling is the transparent bubble, a sci-fi prototype as fascinating as it is perhaps not very sustainable in the desert, a knife in the heart in a land where the Bedouin – or “the man who shuns modernity”, this is the meaning in Arabic – has always found an incredible balance in his way of living between architecture and nature. In the crimson desert night, starlight is dimmed by electric light, and in the silence, petrol generators mutter.

This short story of Nabataean architecture, Petra and Wadi Rum stems from a trip to Jordan, promoted by Samsung Italy to field test the camera of the new Galaxy S22 smartphone series and in particular its #nightography performances. A Samsung Galaxy S22 Ultra was used for the photos in this article.