I visited Notre Dame after the fire

And I did it without being physically there: Rebuilding Notre Dame is a VR documentary that takes you to the cathedral before and after last year’s disaster. 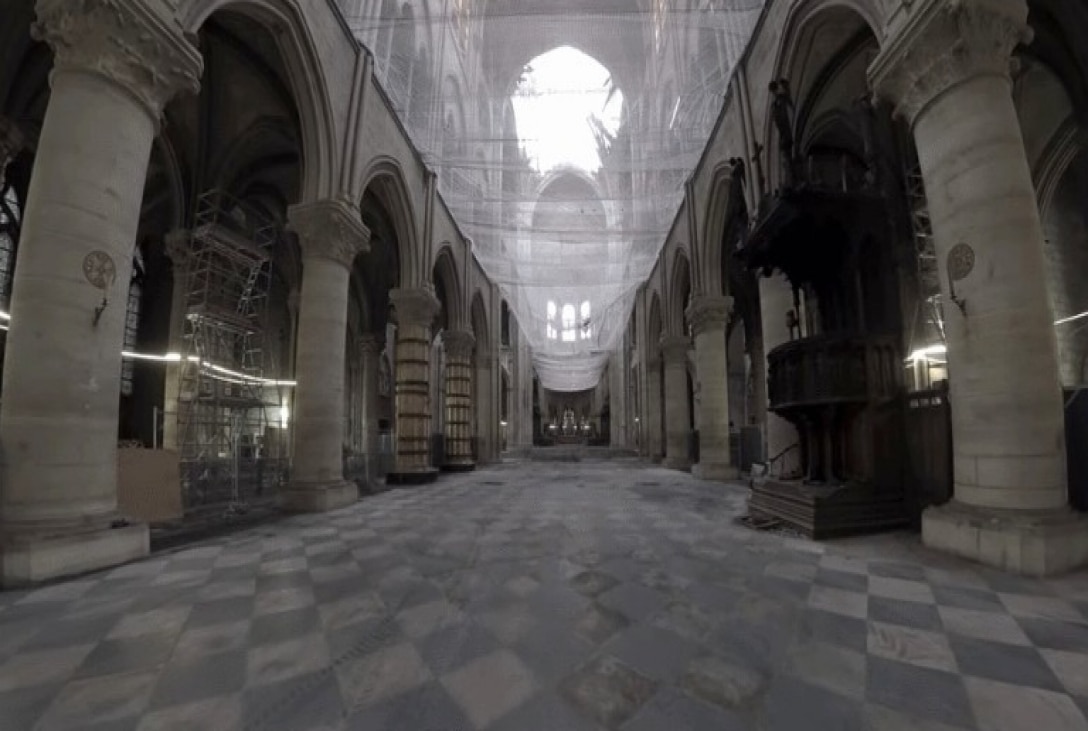 At first, there’s only darkness. Then, the echo of the emergency sirens breaks the silence, filling the darkness with flashing blue and red lights and the sound of the rescue workers. And in the background, screens start turning on, one after the other. Different channels start telling the same story: the Notre Dame cathedral is on fire. That’s how the VR documentary Rebuilding Notre Dame starts. It was created by TARGO, an entertainment company for virtual reality, and is now available on Oculus TV on Oculus Quest.

This prelude wants “everyone to remember the exact feeling of powerlessness we all had when we saw the cathedral burning” explains Director & Co-Founder of TARGO Chloé Rochereuil, “all of a sudden, the entire world was concerned about the cathedral”.

This sixteen-minute experience takes you around the cathedral, reconstructing the terrible fire of last April, showing superimposed images of the past life and the present emptiness of the cathedral. “When we filmed at Notre Dame a year ago, we never thought that the footage would become a historical document so quickly” says Rochereuil. The most important element of the documentary is certainly the huge amount of informative material on the current situation of the interiors of the cathedral, with the reinforcing elements that were placed to support the pillars and the many pipes above the church, right where the spire designed by Eugène Viollet-le-Duc collapsed. The crater that has replaced the floor of the cathedral is an open wound, the abyss in front of which the spectator equipped with a VR helmet finds himself. Only the pipe organ was spared from the fire, but is now surrounded by dirt, garbage, and fast food drink cups.

A bunch of outstanding personalities accompany the public on this interesting journey, by showing vibrant images of the cathedral taken from various archives and alternating them with some bleak images of its current condition. To Notre Dame cathedral rector and archpriest Patrick Chauvet, the end of the cathedral as we know it coincides with the beginning of a personal and spiritual investigation into the divine meaning of the disaster and its cause. "Maybe I'll find the answer when I get to heaven", he says at one point during the documentary. Then, it's the turn of Anne Hidalgo, the Mayor of Paris. In her words, the mourning goes hand in hand with rhetoric, and she adds that no one can really understand Paris without having seen Notre Dame. In fact, after the fire, everyone understood that Notre Dame is part of our common heritage: Paris without Notre Dame is... just less. Then, the public sees Jean-Michel Leniaud, historian and president of the public charity Friends of Notre-Dame de Paris, and General Jean-Louis Georgelin, who was appointed as special representative to oversee the reconstruction of the cathedral by President Macron. "We want to see it shine again," he says during his interview, while standing next to one of the white containers that were placed at the Square Jean XIII, the wonderful garden located behind the cathedral: the spectator finds himself in front of it in this surreal context that nevertheless evokes the real sense of emergency. The archpriest, on the other hand, makes his appearance in an office on the ground floor, where some wires are lying on the floor and, outside the window, a moped parked in a sunny courtyard can be spotted. The historian waits for the spectators in a huge Parisian library, while the mayor waits in her big office overlooking the cathedral. The documentary was filmed with such mastery that it sometimes feels excessive. There is no trace of technicians, workers, microphones. The interviewees seem to be completely alone in the middle of virtual spaces that look perfectly real and at the same tame totally surreal, inhabited only by them and by the spectator, who can even choose to ignore them and have a look around without them obviously noticing. More than the virtualization of reality, it looks like its desertification.

This documentary, which narrates an event that has become central to our lives, uses Virtual Reality, something we are not very used to yet. And it is a good way to test the potential of VR technology beyond a couple of already established applications, which remain somehow niche - gaming and pornography. A documentary of this kind is a new, innovative experience, an approach that is not very popular yet. And it's impossible to watch it - is that the right term? - without wondering about the potential of virtual reality as a means of mass communication. Producer Victor Agulhon also points out that they "hope that this documentary will serve as an example to show how important VR technology can be for travel, culture, and education". Targo would like to install some VR stations around the cathedral, so that as many people as possible can see the documentary.

Read also: The question of rebuilding ‘even more beautifully’ raises as many questions as it answers

Rebuilding Notre Dame has the great merit and at the same time flaw of taking the spectators to places where they have already been, and to others where they will never be. It is an emotional trauma that narrates the collapse, even if only partial, of one of the most famous monuments on the planet, alternating interviews with the recollection of important events and breathtaking aerial views. Bringing the spectators in and out of Notre Dame, before and after the fire and giving them the chance to look around, allows them to travel from private to collective memories. The sixteen minutes of Rebuilding Notre Dame is an objective experience that overwhelmingly evokes subjective memories. Everyone will make their own personal journey.

It was the same for me: watching the documentary with my VR headset brought back to my mind several memories I have of the cathedral, from the first time I visited it, from the summer before September 11th, from a few months ago. This summer, I had stopped to look at the Notre Dame cathedral a few meters from the archbishop's bridge, which is where, at a certain point, the documentary places the viewer; I was with my girlfriend. I didn't know it, but it was our last holiday together: we broke up about ten days later. We had stopped right there to take a picture and for a moment, after turning my back to the cathedral and looking up, I almost had the impression to see us behind the newsstands of the booksellers of the Rive Gauche. Then, I realized that I was wearing the VR headset. The realism, the feeling of being exactly there, in a precise place and yet out of time and yet again in that very precise time, was very intense. If I went back to Paris, maybe I would choose another observation point, with less memories. The documentary, of course, doesn't give you a choice. In my case, memories prevailed over context: the protagonist was no longer the cathedral, but I was. It is the power of virtual reality, but also its greatest limit: The sense of immersion does not allow the detachment that is required to favor reason over gut feeling. Emotion is everything, within this abstract and parallel but very credible world, and it is a mixture of objectivity, subjectivity and randomness. And one cannot say that Rebuilding Notre Dame is not a highly emotional, intense experience.

Another way in which I experienced Notre Dame was completely virtual: I enjoyed running on the Parisian rooftops when I played Unity (Ubisoft, 2014), the chapter of Assassin's Creed set in Paris during the years of the French Revolution. I think that this game probably offers the best three-dimensional digital model of Notre Dame ever. In order to look at the city from above, I even climbed to the top of the deliberately anachronistic spire - the developers had preferred to include the one designed by Viollet-le-Duc in the game, rather than the old one that lasted up until the 18th century. On those roofs I climbed, jumped, and did parkour from sunrise to sunset. What I mean, is that many of the perspectives shown by the documentary were exciting, but not at all original. And they made me feel a little nostalgic for the game, which had plunged me without constraint into a landscape full of statues and spires and details.

Read also: A woman meets her dead daughter thanks to virtual reality

What you would perhaps expect from this documentary is maybe a little more interactivity, the possibility to delve deeper, to discover new things while wandering around the semi-deserted cathedral. It would also allow you to turn a blind eye to some idetails that got lost in the 3D rendering. But in the end, it's certainly not the technical detail that the viewer is left with, but rather a very strong feeling of desolation. And some useful pieces of information about the present and future of Notre Dame, too.