A series of side tables for De Castelli, a jewel-talisman, rugs for Nodus. The common thread of Lanzavecchia and Wai’s projects is the consideration of materials and methods of making. #MDW2017 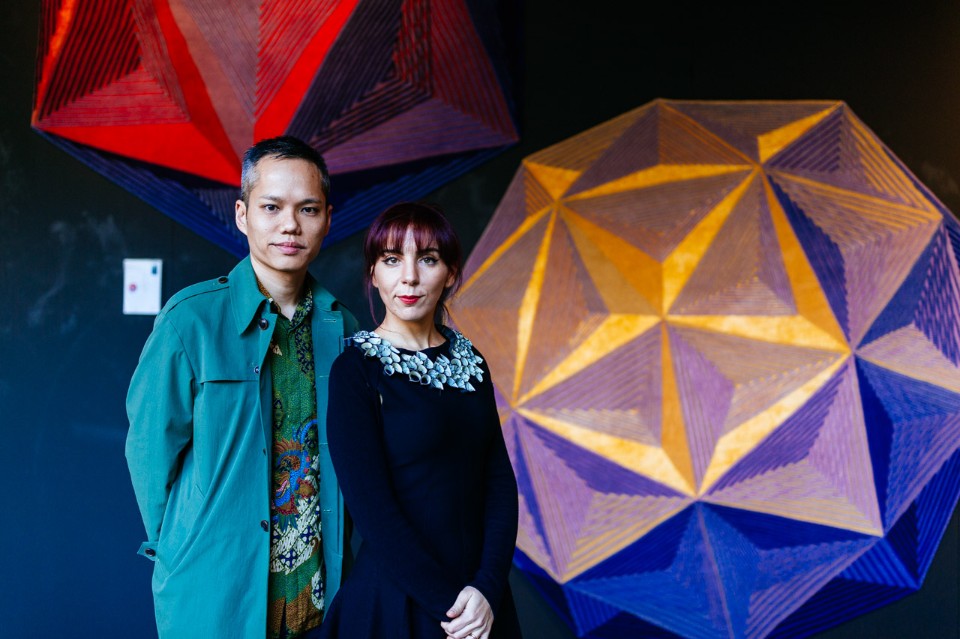 Share
Since setting up a practice with Hunn Wai in 2009 that spans two continents, Francesca Lanzavecchia has grown a great deal professionally. The early designs by the Italian-Singaporean duo attracted the attention of the critics because they proposed a possible dialogue between worlds that are seemingly distant from one another.
First came the marriage between aesthetics and medical products with “Proaesthetics” (Lanzavecchia’s masters thesis at the Eindhoven Academy). Then the design of furniture for the third age, both beautiful and functional (“No Country for Old Men”). Both have entered into recent history for their alternative approach to social themes, cleansing them of any salvational utopianism; however both came up against the short-sightedness of the industry. All the same, Francesca and Hunn have carried on regardless without abandoning their critical acuity, but orientating it towards the sanest that the world of design can offer today: collaborations with small and medium-sized quality manufacturers and research for special projects. This direction has not however ever moved away from the idea of a process that combines thinking and making. In the designs presented at the 2017 Salone a clear line of thought can be perceived: knowledge of materials and making as a central point of consideration, integrated with a thoughtful approach. We talked about this directly with Francesca Lanzavecchia.

Domitilla Dardi: Once again this year your week of presentations at the Furniture Fair is very rich in terms of the range product types and materials that you deal with.

Francesca Lanzavecchia: Yes, every year we try and extend our design universe further and this is much in evidence during the week of the Furniture Fair. This year we will be presenting a collection of small tables, a bird-box, mirrors, a jewel-talisman, rugs and objects for the table in Murano glass. So we’ve covered everything basically!

Domitilla Dardi: Yet there is something that links them together. They are all designs that seem to share a desire to change the state of the initial nature of things. What is born heavy becomes light, the serious becomes humorous, volume is transformed into flatness and vice-versa. Why do you think transformation is so evident in your work?

Francesca Lanzavecchia: It fascinates us to start with a deep knowledge of raw materials and ways of working with them. We spend a lot of time in factories and workshops to get to know these aspects, well before starting to imagine how a design might develop. I always find in the way in which the material reacts to forces a great source of inspiration. And then often it is in the technical processes that you find the design solutions. You just have to know how to look.

Domitilla Dardi: Can you give us an example?

Francesca Lanzavecchia: When I entered the De Castelli factory I was amazed by how the precious metals took shape acquiring on the surfaces an almost volumetric treatment. The process is imbued with the material quality of the metals and this adds to the finished product. So I wanted to bring to sheet back to its two-dimensional essence and work not so much on an alphabet but more on punctuation. Scribble is a collection of small tables that uses the only truly universal part of language, punctuation. What is more, it is a series that exists as being part of a group, that can be assembled and added to.

Domitilla Dardi: Making marks is an important characteristic of your working method, often you start by sketching your initial ideas with a marker pen don’t you?

Francesca Lanzavecchia: Yes and in fact I like to leave a trace of the working of the surface on these tables: they all have a circle that blends out, a bit like a Pantone pen leaves on paper when you’re still thinking about the mark and putting into focus the idea you have in mind.

Domitilla Dardi: Whereas in other cases, it is the raw material that speaks even before it has been worked with?

Francesca Lanzavecchia: Yes, for example in the mirrors that we designed for Gallotti and Radice the treatment of the material could not be anything but central. These are mirrored surfaces that are modified by using acids that give them an appearance that is magical to say the least. It seems to be of the past, yet also the future. It is very much like looking into a pool of water where the surface becomes confused with the bottom and with the sky that reflects. Then again the idea of the mirror came about on its own. We just put inside it the formal reference of the fan, that just like the mirror, is connected to the idea of Vanitas.

Domitilla Dardi: And here we come to another aspect of your work: the ability to work on many levels of interpretation, from the functional to the conceptual. How do you manage this and how does this layering come about.

Francesca Lanzavecchia: First of all, even before the paper and Pantone pen, I personally make conceptual maps, that usually look very messy! It is like brainstorming on paper that I then look at with Hunn and my collaborators. It is a phase of collecting fundamental data for me. After that most of the roads in this map will be abandoned; but it is crucial to have a complete picture – however complex it might be – in which to find the right path.

Domitilla Dardi: This year you will be presenting a second collection of rugs for Nodus. Compared to the first, the theme seems to be less conceptual, is that so?

Francesca Lanzavecchia: The Tacua Fukushimae and Amaurodes Chernobilis rugs contained some very harsh thinking: the insects depicted presented all the small anomalies derived from the genetic variations caused by the nuclear tragedies of Fukushima and Chernobyl. It was a way of thinking about the relationship between artifice and nature that travels always along a very thin line, where error can generate irreparable damage. But it was also a way to think about means of scientific representation: we made reference to the presentations of entomologists and the golden section. This latter is a mathematical rule present almost spontaneously in nature, that is the most highly considered in terms of pure aesthetics. So for this second series the geometry was again the recurring theme. We were interested in highlighting how the use of classical flat shapes could generate a three-dimensional perception. In the end also here, like I said before, it is a case of changing the state of the material, going from the two-dimensional of the flat to the three-dimensionality of the volume.

Domitilla Dardi: And does colour play a part in this?

Francesca Lanzavecchia: Absolutely, they are deliberately not primary colours, because we were interested once again in putting in relation the world of geometric rationality with a colour palette that seems to have come from a sunset, a natural event, beautiful and inexplicable. Actually, perhaps beautiful because of its irrationality, because there is a moment in which the mind has to quieten and observe.

Domitilla Dardi: Another recurring element is that of play, why is that?

Francesca Lanzavecchia:
The basic idea is that at times I make design with the seriousness of commitment and play is the key for seeking lightness, in life and in work. If design is a form of expression - for me much less arduous than verbal expression - play is the universal language, able to speak to the child that is in all of us. Right from the early works by the studio I liked to define the objects as “mates” from the spatial series made of furniture-creatures with mouths and membranes in place of doors and drawers up to the Lungemates tables for Cappellini.

Domitilla Dardi: And this year who are the “playmates” that you will be introducing?

Francesca Lanzavecchia: They go from the irony of a bird-box made ultra-comfortable, because it is built on the grains that they eat, to the new PLAYPlay furniture, designed for South East Asia, to bring inside the home the colours of plants and the fruits of an endless summer. To finish with the objects for the table in Murano glass, for Coin Casa in collaboration with Elle Decor, conceived irreverently with colours and shapes that recall 1950s Cuba and the Caribbean, the effervescent Carmen Miranda. For sure ours are not silent mates!