A blue cube in a Parisian period mini-apartment

In Haussmann’s Paris, Zyva studio subverts the hierarchies of a 37 sqm apartment: a functional element, the Blue Cube, becomes the central domestic element. 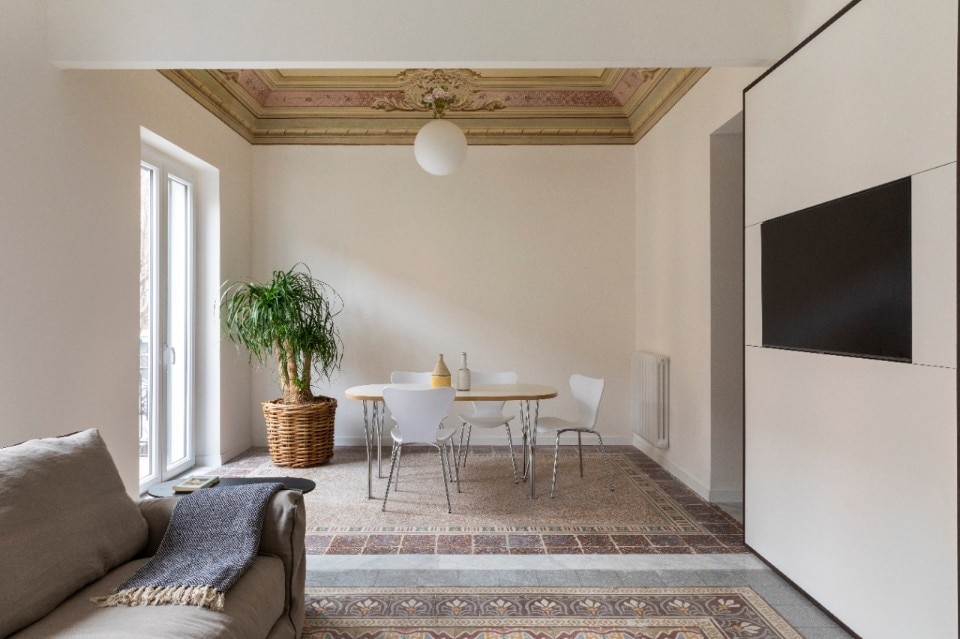 Blue Cube is a period apartment located in the 11th arrondissement of Paris. The Parisian studio Zyva was called upon to transform the Haussmanian apartment into a contemporary environment able to represent the personality of its new owner, a young Parisian entrepreneur.

The project redistributes the relationships between domestic spaces by subverting the hierarchical relationships of the original "bourgeois" composition. Inside an ancient shell made of high ceilings, frames, moldings, doors, overdoors and herringbone parquet, the designers place a central blue cube which gives the flat its name. The spatial organization is no longer articulated around the “noble” rooms but around spaces of distribution and services.

As an allegory to the structure of our planet, blue outside and red inside, the cube is composed of a bathroom - the core of the volume covered with small glazed terracotta tiles - and a continuous system of furniture: the kitchen towards the living area, sliding doors towards the entrance and an equipped wall towards the bedroom.

Read also: Eclectic anomalies in a renovated villa in Biarritz

The Blue Cube becomes a key element in the programmatic redistribution of the apartment, dimensionally efficient, with a strong chromatic identity, sound barrier and functional diaphragm between living room and bedroom, acting as a star around which the user gravitates.

Two large futuristic and oversized ceiling lights tribute to the majestic vintage chandeliers, maintain a continuous and disruptive relationship with the original building and its history, with an attitude that is respectful and playful at the same time.