At Lia Rumma’s house: “I like to combine the historical and the contemporary”

The gallerist’s Neapolitan home is a house that dives into the sea, and is surrounded by an enormous terrace. Inside, new and old meet, and the works of artists dear to her are displayed. 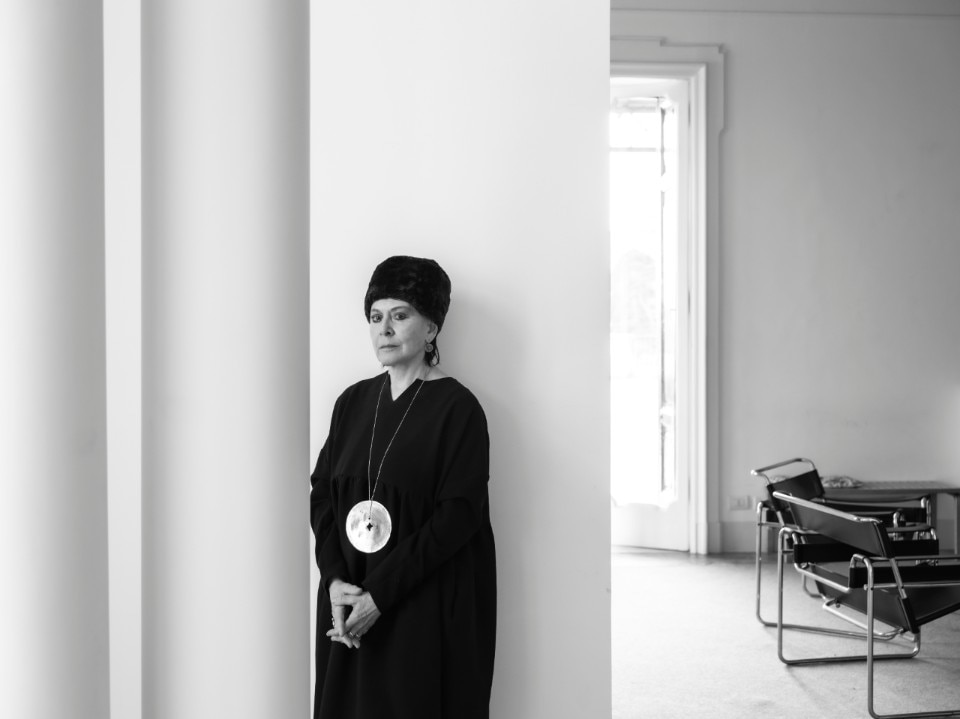 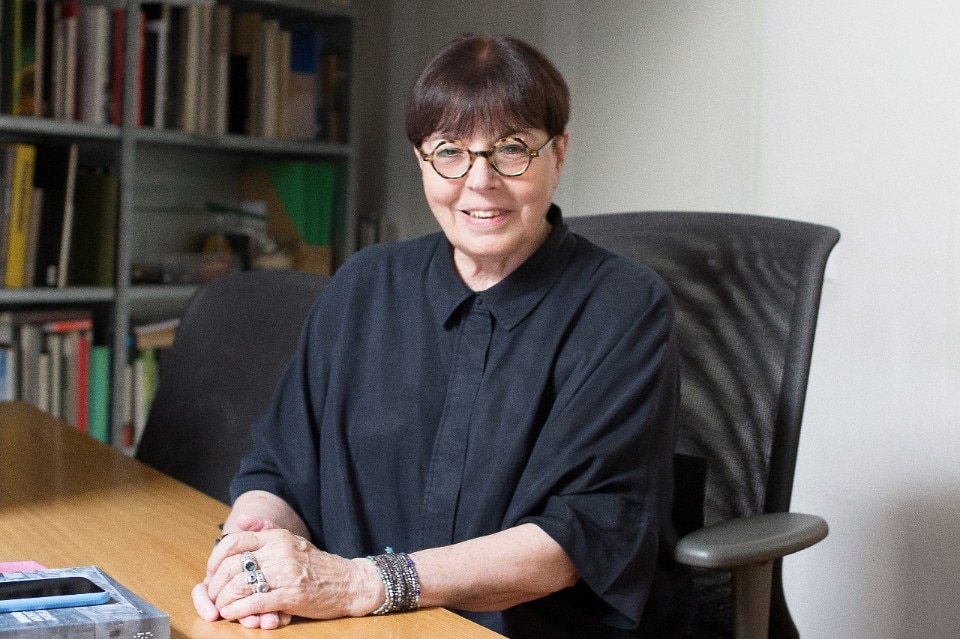 We are in Naples, in Posillipo to be exact (Pusìlleco in Neapolitan dialect), one of the most evocative places in our country and probably in the world. This house that enters directly into the sea is a flat with an immense terrace. The palace overlooking the blue is Palazzo Donna Anna, a monumental 7th-century building by Cosimo Fanzago (1642), built by the Spanish viceroy Ramiro Felipe Nunez de Guzman (treasurer of the Kingdom of Aragon) for his second wife, the wealthy consort Anna Carafa Della Stadera, princess of Stigliano and duchess of Sabbioneta.

Here is one of the three houses of the gallery owner Lia Rumma, the one in Naples. The others are the home in Milan, considered a refuge, and the train, where she spends many hours: “I don’t take the plane because it’s a speed that doesn’t suit me, on the train I travel comfortably and I also have my office, I eat, I do everything, as if I were at home. It’s a special time I dedicate to my things, and it’s like jumping from there to there. This is the right speed for me.” A leading figure in the international contemporary art world, Rumma has been working for years with famous artists such as Anselm Kiefer, Ettore Spalletti, Marina Abramovic, William Kentridge, Alberto Burri, Vanessa Beecroft, Michelangelo Pistoletto and Thomas Ruff, to name but a few; together with Joseph Kosuth she opened her first exhibition as a gallerist, in a rented garage in Parco Margherita, in Naples. It was sold out.

In the photo the artwork of Joseph Kosuth, Wittgenstein’s color, 1989

In the photo the artwork of Alfredo Jaar, m’illumino d’immenso, 2009

In the photo the artwork of Gino De Dominicis, Senza titolo, 1985

In the photo the artwork of Joseph Kosuth, Wittgenstein’s color, 1989

In the photo the artwork of Alfredo Jaar, m’illumino d’immenso, 2009

In the photo the artwork of Gino De Dominicis, Senza titolo, 1985

The large flat with its history-worn majolica floor tiles is embraced by a terrace of over 400 square metres surrounded by a variety of plants, with a breathtaking view of the Tyrrhenian Sea. From the moment we enter, we sense the intense flavour of a home that has been cared for down to the smallest detail and lived in, strongly lived in, while we are immediately confused and fascinated by a silhouette (1.1) of the gallerist standing on the phone, a work by Michelangelo Pistoletto: “I was visiting Michelangelo in his Foundation in Biella; the phone has always been of fundamental importance to me, so several times I apologised to Pistoletto and I phoned and phoned. So he took some pictures of me; one day he called me and said “here, this is your portrait” – Portrait of Lia Rumma (Ritratto di Lia Rumma), 2008. I put it up right at the entrance, in front of the door: sometimes people mistake me for the portrait and extend their hands to me.”

In this place, there seems to be perfect harmony between yesterday and today. “I like to combine the historical with the contemporary. The house has this dichotomy, like a sort of elastic band”, he adds. The whole house seems to have been conceived according to this inspiration: kilim carpets and textiles from Turkmenistan are placed next to the contemporary artworks that most represent it, sculptures, large paintings, mixed media. One of the favourite spaces is the kitchen, where Lia Rumma likes to spend her time and cook, possibly for many, many guests. In particular, the moment of feasting reminds her of her husband Marcello, a great patron of the arts, whom she married in 1967. With him, “when we lived in Salerno, the house was always full of people coming and going, the table was always set”, she recalls. A woman’s face, a coloured ceramic sculpture, dominates the large canary-yellow piece of furniture with Formica inserts, while dozens of pots and pans hang here and there.

The large dining room has a table that is 8 metres long and can seat more than 30 people; “it reminds me of my childhood with my family, we were many and always cheerful at lunch and dinner-time; we had interesting conversations”. Now the table here is always set with a white tablecloth and shiny silks as well as the unmissable ceramic candelabras by Ugo Marano and other objects in the same material by Nunzio Vitale. The back wall frames the perspective of a series of human faces with outlines drawn in black, as well as a hen: this is the work of William Kentridge on faces: Head - Man with Beard, 2017; Small Silhouette (Bird) Variation, 2016; Head (Miner), 2016 and Head (Man with Hat), 2017. A marble frame marks the perimeter of the floor of this room, highlighting even more the caramel-coloured brick in contrast to the large black leather star, hanging on the wall – Leather Star on Javelins (Stella di cuoio su giavellotti) from 2007, by Gilberto Zorio.

Then there are two large bedrooms, similar and adjacent to each other, both accessed through other rooms, which is atypical. The Neapolitan gallerist argues that they are more like two living rooms than two bedrooms. Lia Rumma sleeps in the one that faces Piacentini’s large solid wood wardrobe, guarded from above by the steady eyes of four marble busts: Venus, Juno, Apollo and Mercury. Next to another monumental work by William Kentridge, above the wooden bed is a large image of her next to her mother (there were ten children in the family), an extremely charming woman with an extraordinary sensitivity to all art and culture, which attracts the attention of this space, so intimate yet so open. It is a work by Clegg&Guttmann, The Gallery proprietress and her Mother, 1986; “I feel protected by this painting. my mother’s face is lit in an extraordinary way, an almost Caravaggio-like light and the rendering is very cinematographic; here I find the encounter between the old and the new, between history and the contemporary. This portrait is of classical inspiration, my father was a well-known Latinist, he published the Italian and Latin dictionary, he was a scholar of Dante Alighieri. I got to know the contemporary when I met Marcello – a lover of art, philosophy and aesthetics: he was very young and he made me understand the present, he looked at his own time and understood it, he understood what was happening around him. With him I got to know our time by travelling to Paris, New York, Turin and Milan to meet artists, critics and art historians”.

In the photo the artwork of Ettore Spalletti, Colonne Perse, 2000

In the photo the artwork of Anselm Kiefer Freias Garten, 2015 and Gilberto Zorio, Leather star on javelins, 2007

In the photo the artworks of William Kentridge, Porter Series: Asia Mineure (Tree man), 2006, and Clegg & Guttmann, The Gallery proprietress and her Mother, 1986

In the photo the artwork of Ettore Spalletti, Colonne Perse, 2000

In the photo the artwork of Anselm Kiefer Freias Garten, 2015 and Gilberto Zorio, Leather star on javelins, 2007

In the photo the artworks of William Kentridge, Porter Series: Asia Mineure (Tree man), 2006, and Clegg & Guttmann, The Gallery proprietress and her Mother, 1986

Next to this is another similar bedroom with as many extraordinary works, a large photograph by Marina Abramovic, Dragon Heads from 1990-92, in which the artist appears wrapped in the coils of a python and close to it a shelf by Haim Steinbach entitled Neapolitan tableau, from 1987, consisting of a wooden shelf, a bronze statuette and three decorated plates, as well as a portrait of Marylin Monroe by Andy Warhol on the wall – Marilyn Monroe, 1967.

I like to combine the historical with the contemporary. The house has this dichotomy, like a sort of elastic band.

A beautiful table by Carlo Scarpa marks the centrality of the neighbouring room. The corners of the house are dotted with iconic designer pieces: a black Egg Chair by Arne Jacobsen aged by the years, Ettore Sottsass’s pink neon Ultrafragola mirror, the Eames’ Lounge Chair; we also find in a room not far from this four chairs by Marcel Breuer next to a marble fireplace. The wide, shiny corridors, decorated here and there with bright blue stripes, or 10 by 10 decorated with stars, connect the different spaces with other works that are important to her; even the gallerist’s wardrobe is marked by a fluorescent yellow neon light by Alfredo Jaar where we can read “Naples”, a 2015 work entitled Napoli Napoli. Neon is her passion, and there is another writing, also by Jaar but from 2009, which reads “m’illumino d’immenso” (I illuminate myself with immensity) in bright yellow next to a window overlooking the blue outside. The truth is, everywhere you turn in this house, you see this bright blue sea (like a neon) that fills the view.

In the living room, a couple of dark brown sofas are placed next to a small wooden figure; it looks like a little girl, sitting on a chair, but it is her, the great Lia; “it is a work by Mario Ceroli (Ritratto di Lia Rumma (Portrait of Lia Rumma), 1968) that my husband commissioned when I was very young and also very thin, I had long hair, it was the late ‘60s”. In the centre is Isamu Noguchi’s coffee table with a mirrored black ash wood foot and glass top; on the wall is a beautifully pastel-coloured painting by Anselm Kiefer, La Belle de la Seine, 2014.

Near one of the three large French windows giving access to the terrace, two powerful monochrome columns by Ettore Spalletti (Colonne Perse, 2000) stand out; just outside, six large terracotta vases by Nanda Vassallo with bright colours and intriguing names such as Vento fermo della notte, Vento Mio, Vento dei mari lontano, Vento caldo della sera, Vento di Terra, Vento Tuo frame a small lounge of wooden seats, while a central flowerbed of succulent plants creates a green oasis. In this enchanted place Lia Rumma, with an ancient Afghan amulet around her neck, is glorious and smiling like a queen in her element; the sky that touches the water is music to her; “I like listening to the sound of the sea; the sea is sometimes sweet and overbearing. I like it. It sounds like an orchestra.”

Read also: At Arnaldo Pomodoro’s studio, a “kasbah” in Milan