Design as architecture: Aldo Rossi as a designer, through the Domus archive

Coffee makers, pure forms and memories of cherished objects: we look back at the history of the objects designed by the Italian architect and published in Domus, particularly in the 1980s, now on display in Milan. 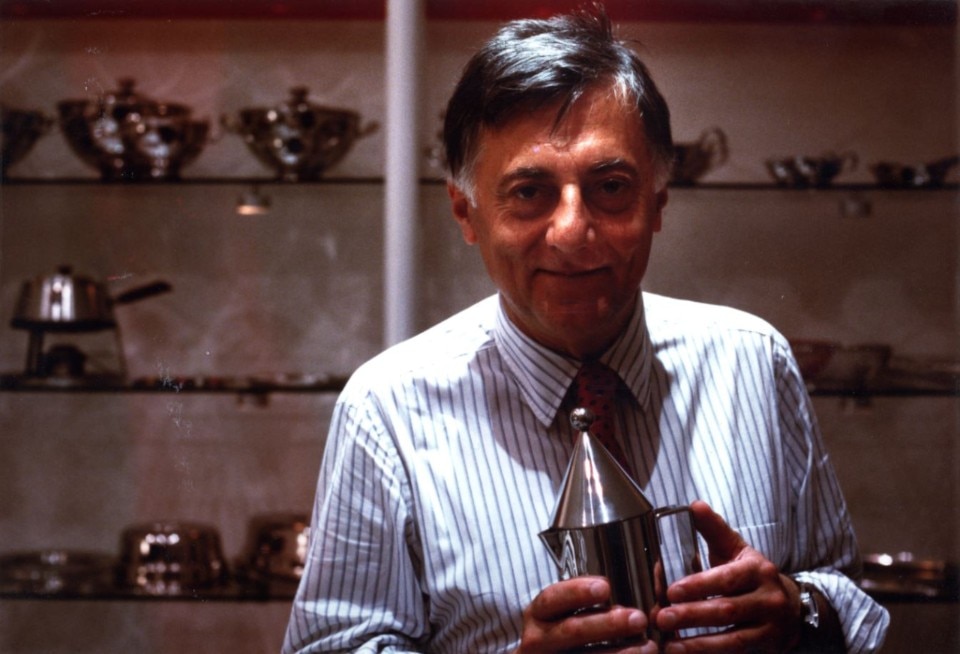 Aldo Rossi’s work as a designer was published in Domus in the 1980s, when it was edited first by Alessandro Mendini and then by Mario Bellini. Rossi himself designed the cover of the first issue of Mendini’s editorship, in which Manfredo Tafuri reflected on the genesis and significance of the design of his Teatro del Mondo, the architecture-object set up for the 1979/1980 Venice Biennale, when the idea of staging architecture exhibitions through architecture took hold.

In the years that followed, it was rare to find on Domus any in-depth coverage of his activity as a designer, which was perhaps seen as a secondary activity and not linked to the group of architects who became better known for their designer pieces than for their built architecture.

As is extensively documented in the current exhibition at Museo del Novecento in Milan curated by Chiara Spangaro and set up by Morris Adjmi, when dealing with objects or furniture Rossi applied the same design language he used in architecture. He shifted naturally from the large to the small scale, reflecting and creating “objects of affection”, taken from memories of travels and places dear to him, such as the cabins of Elba, the domes of churches and monuments, crownings, the language of ancient architecture – towers, tympanums, columns, windows – and its pure forms – triangles, cones, pyramids, spheres. This is how the immortal La cupola and La conica coffee makers and the products for Alessi were born.

The Relief Table with turned legs for the marble company Up & Up (now Up Group), within the article Designing in marble

Il Teatro del Mondo, published in the first issue of Alessandro Mendini's editorial staff, in the essay by Manfredo Tafuri

Rossi’s Elba cabin for Bruno Longoni Furniture Atelier, published among the most significant design objects on the occasion of the thousandth issue of Domus

The coffee maker The dome for Alessi within the advertisement for Alessi, Forse non tutti sanno che (Perhaps not everyone knows that)

The advertising of the Momento watch for Alessi, alongside that of Richard Sapper

Advertising of the Paris chair for UniFor

The Relief Table with turned legs for the marble company Up & Up (now Up Group), within the article Designing in marble

Il Teatro del Mondo, published in the first issue of Alessandro Mendini's editorial staff, in the essay by Manfredo Tafuri

Rossi’s Elba cabin for Bruno Longoni Furniture Atelier, published among the most significant design objects on the occasion of the thousandth issue of Domus

The coffee maker The dome for Alessi within the advertisement for Alessi, Forse non tutti sanno che (Perhaps not everyone knows that)

The advertising of the Momento watch for Alessi, alongside that of Richard Sapper

Advertising of the Paris chair for UniFor

A passion for coffee makers

It is Mendini who introduced him to the company Omegna at the end of the 1970s with the Tea&Coffee Piazza project, an occasion for a “mainly formal research” involving 12 architects including Rossi, Michael Graves, Robert Venturi and Richard Meier, in the design of a tea and coffee service that expressed their architectural language. (Domus 623, 1981). The result was a collection of “tableware urbanism” that Rossi conceived as a set of pieces with blue inserts and crowned by spheres, collected in a small theatre of silver and glass, iron, crystal, quartz, copper, crowned by a tympanum and a clock.

Designing tools for making coffee became a passion for Rossi, almost an obsession; coffee pots became a frequent subject of his sketches. He worked enthusiastically with the company’s technical department; as Alberto Alessi recalled in an interview in 2015, “at the time we had a small kitchen in the office where we carried out the first tests with prototypes and Aldo was as happy as a kid when he saw the coffee actually coming out” (Domus 992, June 2015). For the Milanese architect, coffee makers were “inhabitable” structures, architecture to be experienced and seen from inside and outside.

The collaboration with Alessi

“A 25 cm tall aluminium coffee maker” is the title with which Marco Romanelli presented Rossi’s new project for Alessi in January 1988, drawing attention to the strong link between his architectural and design projects; just as he had done for the La conica coffee maker in 1984, so too for La cupola there was a return to the pure forms and crownings of churches and monuments, a return “to the spherical shape, to the lesson of Boullé”. The essay was accompanied by Rossi’s technical drawing but also by a poetic one, in which the coffee pot was part of the urban landscape, next to the Basilica of San Gaudenzio in Novara (Domus 691, January 1988).

The collection also included the kettle Il Conico, published for the first time in 1986 in a photograph by Luigi Ghirri at the Triennale exhibition “the domestic project”, curated by Mario Bellini in 1986, which brought together the design projects of 26 artists and designers who interpreted the archetypes of the home in the modern age. In Rossi’s installation, the kettle and coffee pots were oversized and placed in an enormous shelf: this is how he interpreted the idea of “domestic space”, where the objects are symbolically parts of that “theatre” in which the human being moves, contributing to create the scenario of existence. (Domus 671, April 1986).

Rossi found in Alessi the right interlocutor to experiment, encouraging the company to deal with objects never produced before, such as pens, chairs and watches. Momento, the wristwatch with steel case that could also become a pocket watch, was presented alongside Richard Sapper’s “Uri.Uri” in a bright yellow advertising campaign in 1988: “Momento should be read as pure form”, the slogan said (Domus 699, October 1988).

Rossi’s furniture between form and experimentation

At the beginning of the 1980s, introduced by his colleague Luca Meda, Rossi got to know the Molteni family and became involved in the world of furniture. He designed the modular bookcases Cartesio, in sheet metal and glass doors, and Piroscafo, “inspired by the architecture of Perugia”, the Consiglio table, with its square-section legs, the Parigi chair, with its curved armrest that breaks up the rigid symmetry of the seat, and the Museo chair, now produced by UniFor and designed as furniture for its Bonnefanten Museum in Maastricht.

The furniture was presented in columns or advertisements documenting the revolution in office spaces, which evolved according to the changes coming from the United States – the “open offices”. These were also years of experimentation with forms: among the novelties in January 1988, Rossi’s document cabinet, Carteggio, a totemic form with drawers and doors, was featured on the pages of Domus alongside a “cubist” sideboard by Gaetano Pesce and a minimalist bookcase by Franco Raggi (Domus 690, January 1988).

In 1989, the Teatro series, designed in 1982 together with Meda, was released, including an upholstered armchair and small sofa, designed for a small theatre in Milan (Domus 708, September 1989).

When working with craftsmanship, Rossi found a good partner in Bruno Longoni and his woodworking atelier in Cantù, for whom he produced, among other things, the AR4 wood sideboard with “cathedral green” glass doors, a direct reference to a piece of furniture dear to the architect and kept in his home (Domus 662, June 1985). Bruno Longoni also produced the wardrobe Cabina dell’Elba, a symbol of Rossi’s poetic language, a small living unit that is also an “object of affection”, which Rossi draws from the memory of moments and places dear to him; the Cabina, which only appeared in Domus in 2018, on the occasion of the magazine’s 90th anniversary, was selected as one of the 1000 most significant objects in the history of design (Domus 1000, 2018).

Experimentation with materials, such as marble, an ancient architectural material, led him to design the Rilievo table, manufactured by the company Up&Up (now Up Group): the reference model is once again an old piece of furniture Rossi had in his studio, with turned wooden legs: a challenge for the skilled artisans of Massa Carrara and published in a study on the different approaches of some designers towards marble.

Rossi’s design is a balanced language made up of pure forms, geometries and design rigour, guided by the memory of cherished, common objects that recall moments of everyday life; as Romanelli observes, memory for Rossi was “the unconscious desire, because it is poetic and not dogmatic, to build a civil language [...]”, and the technical-constructive attention in designing the coffee makers, “carries the desire to improve the experience without affecting the form of the object, or rather improving it”. (Domus 691, January 1988).