A room with a view of scenes from the journeys of 18th and 19th century travellers. Produced by Gupica, using the smallest glass tiles in the world. 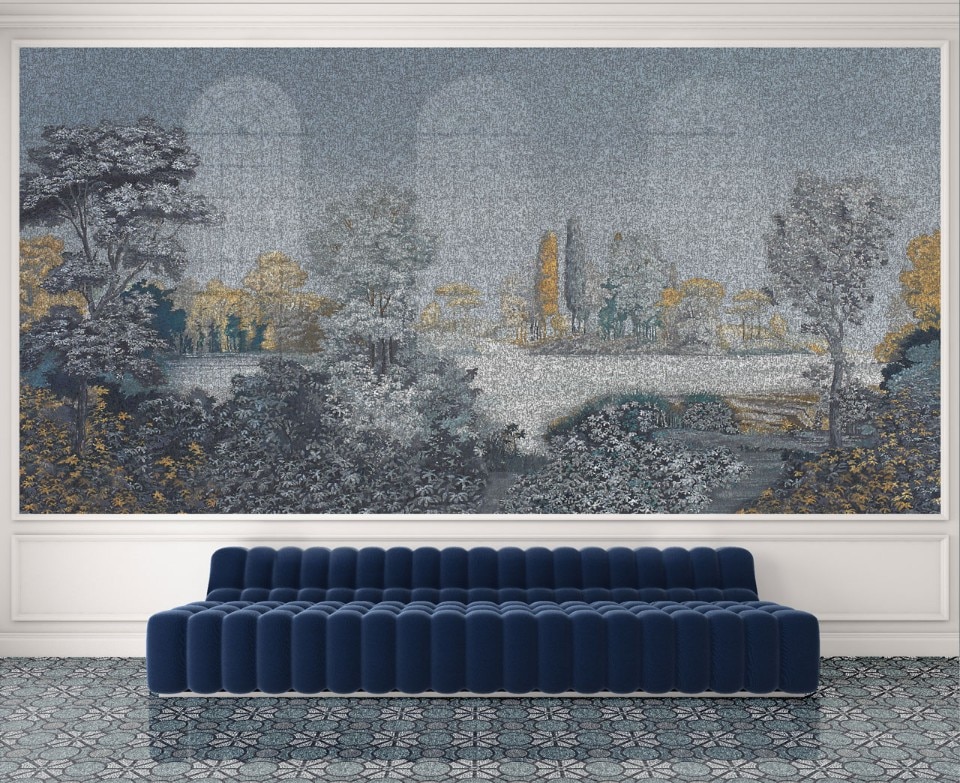 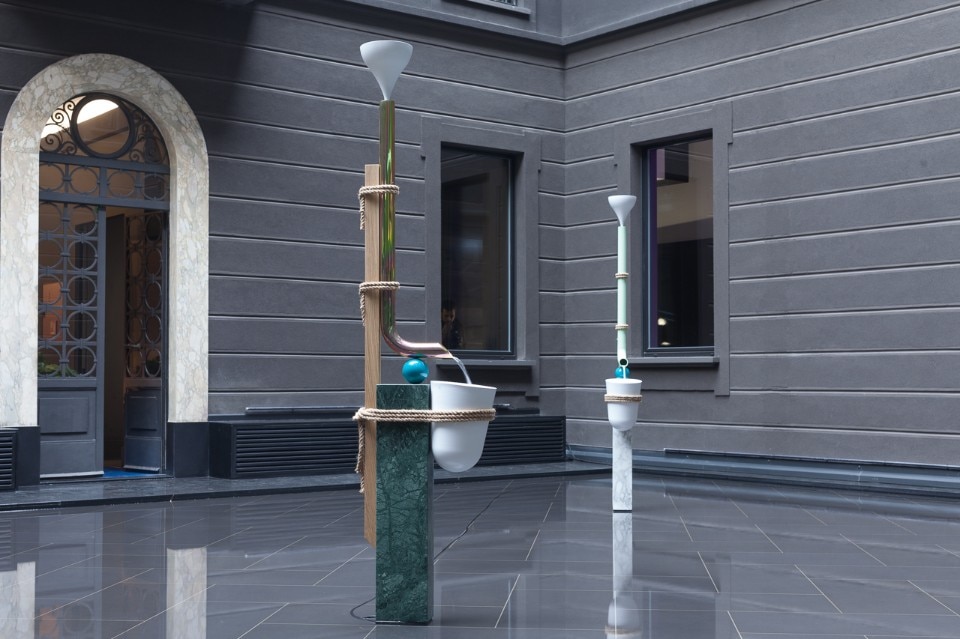 Featured a couple of Fuorisalones back with a hand-drawn room-landscape, Gupica, an artistic alias for the artist - and the studio of - Gunilla Zamboni, returns this year with another complete decoration project for interiors. The installation-project, which puts the scenographic ambitions of wallpaper to shame, is called “Camera con vista. It represents the launch of the collection “Grand Tour - Viaggio in Italia”, “racconto di luce”, made with Tilla, the smallest glass tiles in the world, produced by the brand Mutaforma. The extra effect of this collaboration lies in having intensified the vibrant qualities of the stratified glass, creating a canvas on which, thanks to the light, the typical landscapes of the Grand Tours of the 18th and 19th centuries are transformed into something more tangible. Infused with a vital and shifting atmosphere which cancels the outlines of the trees, the countryside, and the remains - both intact or in ruins - of architecture. A kind of artistic-industrial variation of augmented reality, the technology which enhances the sensory perception of reality through information which is not visible.

How did the collaboration with the Mutaforma brand come about? Did you already know of the company?
It came about through Martina Gamboni, who presented me to Andrea Radice, the CEO and co-founder of Mutaforma during an opening event at the Nilufar Depot, where last year I exhibited two of my works. A short while before, Martina had shown me some samples produced by the company, and I immediately thought of various ways in which this product could be used, both in the field of furnishings and independently as a surface covering.

What difficulties did you come up against in the transition from paper to the industrial definition of the project?
There were no real difficulties, apart from understanding how the company produced the product, to then reflect on the enormous potential that this innovative material could have for various applications. The collection was constructed in small stages. Some ideas were abandoned, others added according to what could be compatible with the technological aspect of Mutaforma’s production. Everything took place through discussions with the team, via tests, sampling and prototypes. I wanted the collection to have designs which made sense both singularly and as a whole, in such a way that when placed together, they could coexist and be understood by markets beyond Europe. I hope to have managed. I have had the fortune of being aided by efficient and talented designers, immediately establishing a relationship characterised by comprehension and synergy.

Read also: inspired by water as energy for life, Gupica designed her new collection of modular furniture and fabric wallpaper.

What have you learned from glass?
I would say, more than anything else, what I have learned from this glass in particular, which is that in terms of its innovative nature, it is unique; a true innovation in mosaic techniques, a stratified glass on which microscopic particles have been applied, particles which, due to their chemical and physical properties, characterise brightness and quality of colour. I have learned how to make it react, providing it with a further cold note through the use of metals or marbles, or a warmer aspect with woods or fabrics. Everything depends on what one needs to create.

How many, and which, destinations would make up your ideal Grand Tour?
As it is a product made in Italy which is, however, aimed at an international market, I chose to examine a theme which is also recognisable outside of Italy. A journey which is aimed at ennobling the soul, and which has, as its chosen destination our country, the Grand Tour. The reduced dimensions of this product led me to consider that at that time, micro-mosaics were used to create small souvenirs of travels, Italian scenes which foreigners could take with them when they returned home. Increasing the scale, I produced landscapes and compositions of varying size.
My Grand Tour does not have precise destinations, but aims instead to be a suggestion, imagining that which the gaze of an 18th or 19th century traveller would see in, or recall of, Italy. To create the scenes, I drew inspiration from the mosaics of Ravenna, a number of which had clear Byzantine influences. There is also my home city, Bologna, in the inspiration of the roses which decorate the sandstone ashlar work on the portico of the Palazzo del Podestà, commissioned in the mid-1400s by Giovanni II Bentivoglio. To the untrained eye, the facade seems to be decorated with roses which are all identical, but on closer examination, it emerges that no two are alike. This is also to be found in one of the patterns in the collection.

Your language is economical in its means of expression, and rich in cultural stratification. What is your idea of contemporary luxury?
Often the term is associated with opulence or quantity, and therefore to something which, in my opinion, moves away from its true meaning. I believe that luxury lies mainly in knowing how to act in a measured manner. A principle which can be extended to everything, even to people’s lives, as it is a condition which leads one to feel more illuminated, to overcome difficulties. It is, however, not easy to achieve. However, I believe that every extreme difficulty is followed by the joy of grace, which, in my opinion, represents the ideal concept of luxury.