Passionswege, a dialogue between designers and artisans

Since 2007 it has been one of the most central and original formats of Vienna Design Week. It identifies manufacturers which are still active within the city and leads them into the world of design. Gabriel Roland, currently accompanying Lilli Hollein as co-curator, explains how. 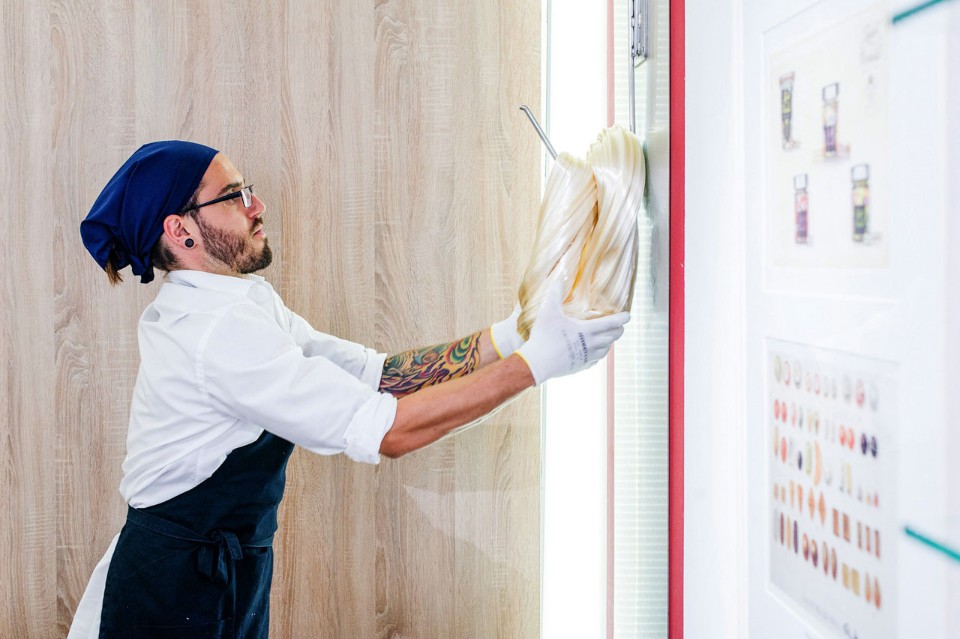 Passionswege is one of the most highly-anticipated projects in Vienna Design Week, as it is here that the most important commissions are concentrated. For almost a year, traditional designers and companies, often small artisan workshops discovered in the suburbs by the curators but well-rooted and active within the urban fabric, work on a common project, learning to discover each other’s skills, and pushing their boundaries.

This year, the list of the “magnificent six” includes the designers “without fixed abode” Burkart Furtenbach (who change the location of their studio with each project), the “illusion” artists Hanakam Schuller, and the food designers Honey & Bunny. These have been joined by established and less well-known international names such as Studio Rygalik from Poland, the Swiss Kueng Caputo, and Laurids Gallée, from Vienna but now based in Rotterdam. Their counterparts, the artisans, are divided between the 7th district, the most important area of Vienna in terms of creativity (with the leather workshop Albert Patterman, the producer of made-to-measure boxes and cases Etui Fialka, the passementerie maker M. Maurer, the silversmith Jarosinski & Vaugoin) and the 1st district, just a short way away from the Cathedral of Saint Stephen’s, with J. & L. Lobmeyer, a two centuries-old company specialised in glasswork, and the artisan sweets workshop Die Zuckerlwerkstatt. Each has an interesting history behind them, and this year they have worked together on new stories and new projects.

This is your first year as co-curator of Passionswege. What are the main characteristics and new features?
Gabriel Roland: Passionswege is the backbone of the entire programme. When Lilli Hollien, Tulga Beyerle and Thomas Geisler founded Vienna Design Week in 2007, the initial idea was to bring together the rich legacy of historic artisan companies who have miraculously managed to survive within the urban fabric and the centre of Vienna. These companies are the lifeblood of contemporary design which, in turn, can offer them an opportunity for regeneration. The vital aspect, written into the DNA of Passionswege, is that there is always some form of dialogue. It is neither a case of the companies telling the designers what to do or asking them to design a product in order to sell more, nor do the designers tell the company how to produce. There is always dialogue, at times difficult, other times less so. There are those who immediately understand the spirit of the project, while others need to be accompanied.

Are we talking more about the companies or the designers?
Gabriel Roland: I would say both. It is an unusual project because no-one is in charge. Everyone works side by side for the entire duration of the operation. Both parts are aware of the abilities of their counterpart, and they understand what they can learn from each other, without changing their own identity. In some way, they create a shared project together. I think this is the true strength of Passionswege.

A third important figure is the curator. Do you choose the designers and search out the artisan companies? How do you go about doing this?
Gabriel Roland: One of the criteria-guidelines is that each year the VDW moves to a different part of the city. This year we are in the 7th district, and we also try to reflect the identity of the area we are in through the companies we choose for Passionswege. This is the first step.

What are the characteristics of the 7th district, and why did you choose this area?
Gabriel Roland: It is a district which is home to a lot of creative people, full of ateliers and designer stores. It has taken us 13 years to get to this point, because if we had come here sooner, it would have been too obvious a move. The mission of VDW has always been to discover new places When we came to the 7th district, we realised that there were a lot of companies that even the residents of the area were not aware of, and this made it more interesting for us. We learned that discoveries can also be made in well-known places.

However, not all of the companies are located in the 7th district.
Gabriel Roland: There are also some “evergreen” companies which we have been collaborating for many years, above all in the first district, such as J. & L. Lobmeyer.  They have already acquired an excellent level of know-how, and they have a perfect understanding of how to navigate within the project. In their case, our question was “How can we still surprise them? How can we make the challenge more interesting?”.

How did you manage?
Gabriel Roland: In the case of J. & L. Lobmeyer, for example, we invited two artists, Markus Hanakam and Roswitha Schuller. They are very much in touch with the culture of materials, interested in the form of things and in the way in which we interact with objects in everyday life. But they are not designers. Together, they have perhaps created a new range of products. The “drama” that Hanakam Schuller has staged, and which transforms a dining table into a game table, would never have been possible in a normal design and manufacturing process.

Coming back to the designers, how do you go about choosing them?
Gabriel Roland: There are many with whom we have wanted to collaborate for many years, that we follow and rate very highly. We also look into what is new, what is going on. We examine designers who are just starting out and who are beginning to make a name for themselves. We look for designers who have already found their own way and style. Every year, we also include a designer from a guest country, in this case Poland, with Studio Rygalik.

Once the pairings have been made, do you leave them to work by themselves or do you step in at a certain point of the process?
Gabriel Roland: It is a delicate matter, also because the relationship between the designer and the artisan goes beyond all possible cultural and linguistic barriers. Completely different ways of communicating between them and learning from each other emerge. It is not even a question of speaking, but of simply being together.

The way that these situations are communicated to the public is also very important.
Gabriel Roland: I agree. For example in the case of Albert Pattermann, some people confessed that they had noted this shop and workshop for the first time, despite having passed it every day for years.

It is a case of showing people that these companies are not “old”.
Gabriel Roland: It is a case of learning what the city has to offer. Often the tourist image of the imperial city, full of clichés, dominates. In reality, Vienna is a vibrant city with a lively artistic and design scene, full of new galleries. Then we have this fabric of traditional artisan production. There is often talk of “urban production”, of a way of producing as closely as possible to the end user. We often wonder how to repair things, how to make people understand that products can last long after fashions have passed. This is not just down to the quality of materials, but also thanks to design, which means they will still be attractive after 40 or 50 years. This is what designers and artisans need to discuss. Even simply to understand what we will need in the future.

It seems that combining artisan skill and design is becoming ever more fashionable.
Gabriel Roland: Yes, but I think we need to be careful, because nostalgia as an end in itse