Jack Stauffacher, a typographer and printer who mixed classicism and the avant-garde

One of the last great American moveable-type printers has left us. Sophisticated and well read, he received many awards and features at the SFMOMA. 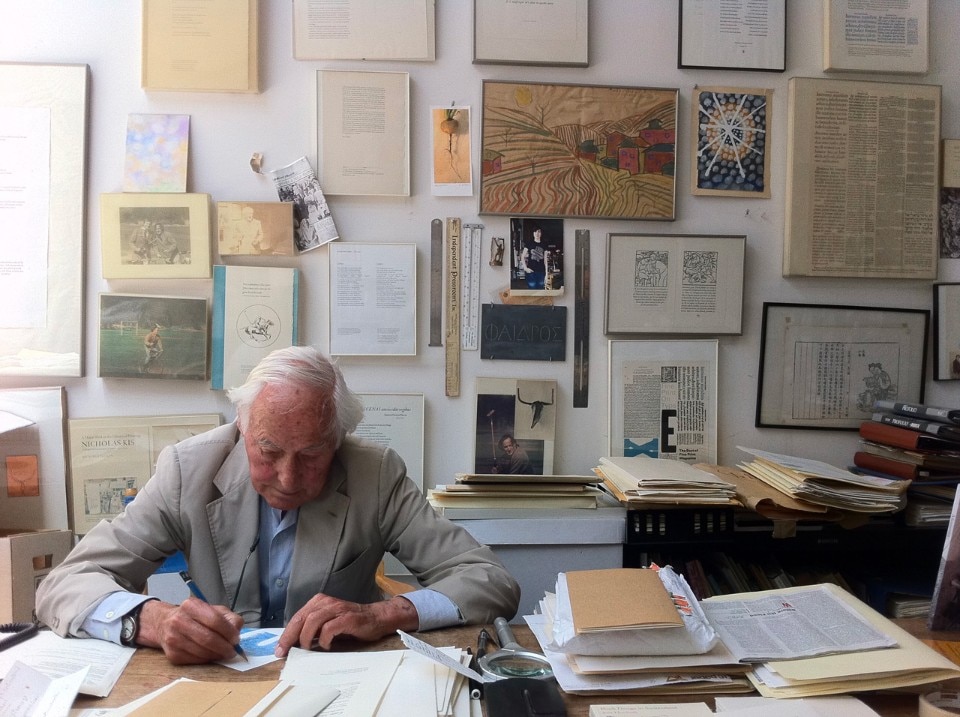 At 90 years of age, Jack Stauffacher still cycled from his home to the ferry and from the San Francisco ferry dock to his Press. He had aged serenely and was in great form, a yesteryear dandy, tall, blue eyes, elegant in a bow tie and always surrounded by friends.

That is how he is remembered about to cycle home, helmet on head, as he departed 300 Broadway in San Francisco, the home of his Greenwood Press. Just a month ago, Jack held a copy of Oxen, Plough, Bicycle fresh from the press, his Tuscan journal of a period in 1950s’ Italy that changed his life. Speaking to him on the telephone a few weeks ago, he was still passionate about the Italian printing tradition and the old paper mills he had visited in Tuscany. He loved Aldo Manuzio, the Renaissance humanist typographer, scholar, editor, compositor and publisher.

If asked to describe himself, however, Jack would say he was a printer, first and foremost, then came typographer, because “printer” was closest to his concept of the profession. When the digital revolution shook the world of graphic design in the mid-1980s, Stauffacher faced the change head-on and allowed the first Mac to cross his printing shop threshold. He had already experienced the other great technological revolution in printing in 1966, when he moved to a Californian printing press that was the last using hot-metal typesetting.

Born in San Francisco in 1920, Jack Werner Stauffacher commenced his “typographical journey” as a teenager in the family home in San Mateo, operating in a small workshop built with his father, who also made him boxes to hold the few essential typeface, Perpetua, Stymie and Goudy.

Stauffacher quickly became a master printer. A critic wrote of his book Janson: A Definitive Collection that, such was the quality of the printing, no further improvement was humanly conceivable and that it had a black and vivid quality without too much pressure applied. It was this book that secured him a Fulbright grant which took him to Italy from 1956 to 1958, where he studied the fonts of Renaissance humanism. His cycling excursions into the Tuscan countryside inspired many paragraphs of his journal, such as that stating that the free wheel sounds like a cricket on the rolling hills of a Tuscan summer. After returning to the United States, he also spent time teaching typography: first in Pittsburgh, Pennsylvania, then at the San Francisco Art Institute and the University of California, Santa Cruz. In the 1970s, he ran a Center for Typographic Language in his atelier at 300 Broadway, with workshops by major collaborators such as the type designer Hermann Zapf. At the same time, he was a publisher, typographer and printer of poetry and classical and contemporary texts in small prized editions.

Jack Stauffacher’s work was split between (and cohabited with) two opposite poles. On the one side was the classical typography, in which he was a master: his Plato’s Phaedrus is a jewel of inventive; as is his more recent The Vico Collaboration, produced with photographer Dennis Letbetter and devoted to the Neapolitan philosopher Giambattista Vico. At the other extreme was a never-waning passion for the large wooden typeface he had inherited and with which he embarked on quasi-futuristic experiments, ironic typographical divertissement now conserved in museums such as the San Francisco Museum of Modern Art and other leading collections. In 1998, Emigre, a then-controversial magazine spreading news of the graphic experimentation underway at the time, paid homage to him with a fine essay and asked him to design a cover, which he did, as a response and homage to the magazine itself, in perfect and extremely avant-garde style. In 2004, the American Institute of Graphic Arts (AIGA) recognised him with its greatest honour.

Jack Stauffacher left us on 16 November. He was the last member of a confraternity of special designers from another era who worked with ink-stained hands on glistening printing machines and precious uncut pages. We want to remember him with his friends, seated at a trattoria table chatting away and swapping books.