Farnsworth House by Ludwig Mies van der Rohe is one of the paradigmatic residences of 20th-century architecture. Here its history, from the complicated relationship with the client Edith Farnsworth to the recent floods. 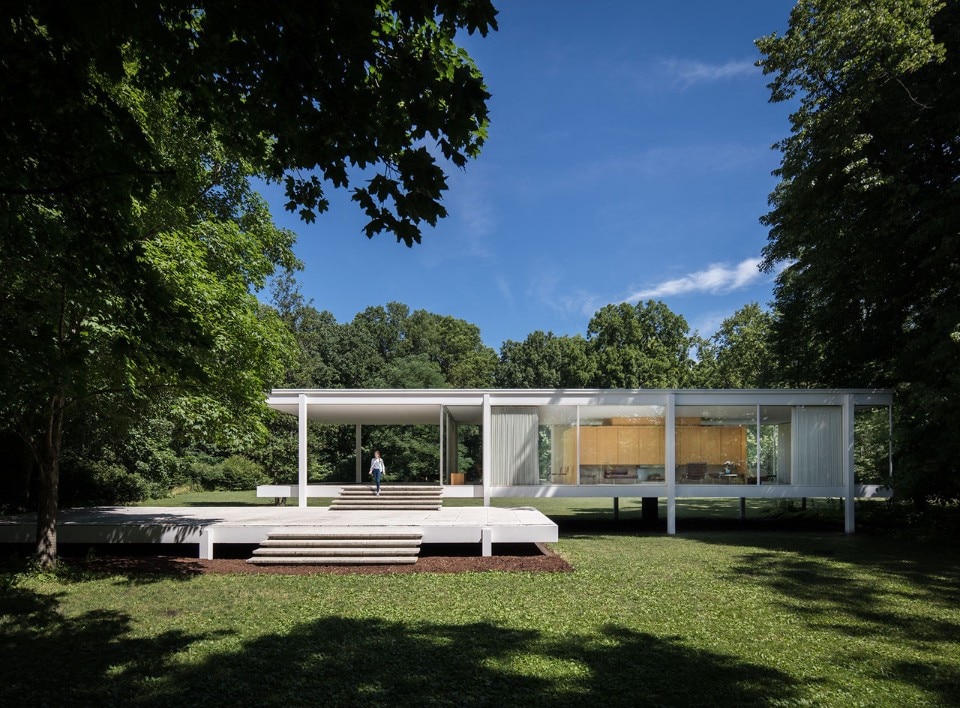 Ludwig Mies van der Rohe’s Farnsworth House, an extraordinary example of open conflict between the autonomy of the architectural language and the proposed housing model, is one of the most emblematic residences of the architecture of the 20th century. Mies van der Rohe’s transparency and formal rigor meet in a forest near Plano, Illinois, the background against which the white and slender structure of the house stands out.

Farnsworth House, one of the most representative works of Mies’ American period, was designed between 1945 and 1950 as a weekend house for Edith Farnsworth, a highly educated and influential woman from Chicago. The building was immediately acclaimed by those architects who recognized themselves in the modernity of the formal perfection, and welcomed it as a manifesto of the renewed rigor of the German master's architectural language. At the same time, that same perfection was interpreted by some people, including Frank Lloyd Wright, as the selfish side of modern architecture. The transparent surfaces of the house represented an assault to the privacy that on the contrary the traditional home aimed to protect, a break from all those traditional housing models considered timeless and, for some, even a silent invitation to voyeurism. This second position was revived by the legal events that saw the client and architect on opposite sides, even before the construction works were even completed.

Ludwig Mies van der Rohe moved to the United States in the late 1930s. He settled in Chicago, where he accepted the position to head the architecture school at the Armour Institute of Technology (now Illinois Institute of Technology), whose campus he redesigned between 1939 and 1958. In Modern Architecture: A Critical History, Kenneth Frampton notes that, thanks to this double presence in the city both as an academic and a professional, Mies’ impact in the United States was amplified. The monumental scale of the technique that he took to its extreme consequences in the US “haunted the architecture scene in Chicago from then on”, reverberating in the work of major architects such as Skidmore, Owings and Merrill and C.F. Murphy.

The project for the Farnsworth House appeared publicly for the first time in 1947, when the MoMA displayed a first model at the monographic exhibition on Mies van der Rohe curated by Philip Johnson. The building, of which Mies was both architect and builder, was completed in 1951 in a flood-prone area near the Fox River.

On a purely and strictly architectural-constructive level, the house looks like a podium, a floor and a roof in their most abstract form: three horizontal rectangular travertine slabs that seem to float 1.5 meter above the ground, the two largest measuring 23 x 9 meters. Confined on two thirds of the larger slabs, the 140 square meters of interior space are totally open, interrupted only by the wooden volume of the bathroom, and enclosed by a glass box. The only shielding element is a natural, white shantung silk curtain. The steel structure is made up of slender, white, I-shaped pillars, placed 6.7 metres apart from each other.

The building reinterprets the architectural type of the one-story rectangular house, empty on the inside and therefore unitary, like the Crown Hall (1952-56) on the IIT campus or the 50 x 50 House (1951, never built). Unlike the Crown Hall, in the two residences the pillars are located on the outer edge of the supporting slabs, allowing the glass to easily slide around the perimeter of the interior. These elements, prefabricated according to American standards, are a prime indicator of the growing distance between the American and European production of Mies, as Kenneth Frampton points out. In Europe, in fact, the architect often made use of the generic cruciform section pillar, as in the cases of the Barcelona Pavilion (1929) or the Tugendhat house in Brno.

Two of Mies’ most famous catchphrases (notoriously hermetic) found their application in this house. The first is the interpretation of architecture as "the will of an epoch translated into space", from which the use of the prefabricated pillar, for example, derives: a growing idealization that is identified with the construction methods of the historical era. The second is, more than the "less is more", the beinache nichts, the "almost nothing" created by Philip Johnson, who designed the Glass House (1949) following the example of this house. Farnsworth House is an exquisitely organized project made of a few essential elements combined following an impeccable logic.

If someone lived in the Farnsworth house, they would wake up in the morning and pick up all their clothes from the floor. They’d be careful where they leave their stuff.

However, the history of the residence would be incomplete without mentioning its client, nephrologist Edith Farnsworth (1903-1977), and her relationship with Mies van der Rohe. The two met in the United States, under unknown circumstances. Over the years, the two maintained a relationship characterized by a lively intellectual exchange. Many people have speculated on their relationship and assumed that the two had an affair, even though there is no proof of this in Farnsworth’s documents and diaries and supposed that Farnsworth was embittered because of a failed love story. For his part, Mies van der Rohe had left his wife and children in Germany and started an affair with sculptress Lora Marx when he arrived in the United States. While designing the house, the two sued each other, so much so that the final touches of the building were made by William Dunlap, following Mies van der Rohe’s drawings.

What clearly emerges from Farnsworth’s diaries - reread by Nora Wendl in the essay Uncompromising Reasons for Going West: A Story of Sex and Real Estate, Reconsidered (published in Thresholds magazine, no. 43) - is the fact that it was difficul to lead a serene life in a transparent house, paid twice as much as initially planned, while having to deal with the unwanted attention of prying eyes, visiting architects, and the press.

"(...) most architects think that the environment is determined entirely by the structure, without the need for anything else. The extreme and purest example of this idea is perhaps Farnsworth House by Mies Van der Rohe, where a building is brought to a maximum of perfection and constructive simplicity and where the environment is fully identified with that perfection, i.e. with the image of an idea closed and finished in itself

The House received praise but also harsh criticisms, from Frank Lloyd Wright to House Beautiful magazine. In the May 1953 issue, in an interview called Report on the American Battle Between Good and Bad Modern Houses conducted by Joseph A. Barry, Edith Farnsworth states: “Do I feel implacable calm? The truth is that in this house with its four walls of glass I feel like a prowling animal, always on the alert. I am always restless. Even in the evening. I feel like a sentinel on guard day and night” and “I don’t keep a garbage can under my sink. Do you know why? Because you can see the whole ‘kitchen’ from the road on the way here that would spoil the appearance of the whole house. (…) Mies talks about his ‘free space’: but his space is very fixed. (…) Any arrangement of furniture becomes a major problem, because the house is transparent, like an X-ray”.
The question arises as to whether a legendary story of the failure of a romantic relationship - as some like to believe - is enough to justify the disagreement between the two. Rather, the real failure was that of a much more banal relationship: the one between an architect who built a manifesto and a client whose needs weren’t met.

To understand why in Farnsworth House you can only hang one painting, put one photograph on top of the closet... To understand why architects like Mies are forced to lie, to lie in their projects, is to understand Nietzsche’s quote: ‘we have art in order that we do not die of the truth.’

In 1969, Edith Farnsworth sold her house to English property developer and art collector Planoa Lord Peter Palumbo, and in 1972 she retired to Italy, where she spent the last years of her life. The house was disastrously flooded in 1996 and subsequently restored in 1999. From Palumbo, the house passed into the hands of a group of preservationists supported by the National Trust for Historic Preservation in 2003, later becoming a National Historic Landmark for the US Interior Department. The house is elevated 1.50 meter above a flood plain, but in May 2020 this proved not to be enough to save it from floods, so today a strategy to save Ludwig Mies van der Rohe’s masterpiece is being developed.