The structure hosted the first Universal Exhibition in 1851: a fundamental building in the history of architecture, both for its monumental scale and the technical innovations at play. However, it was not an architect who designed it, but a botanist and greenhouse builder: Joseph Paxton. 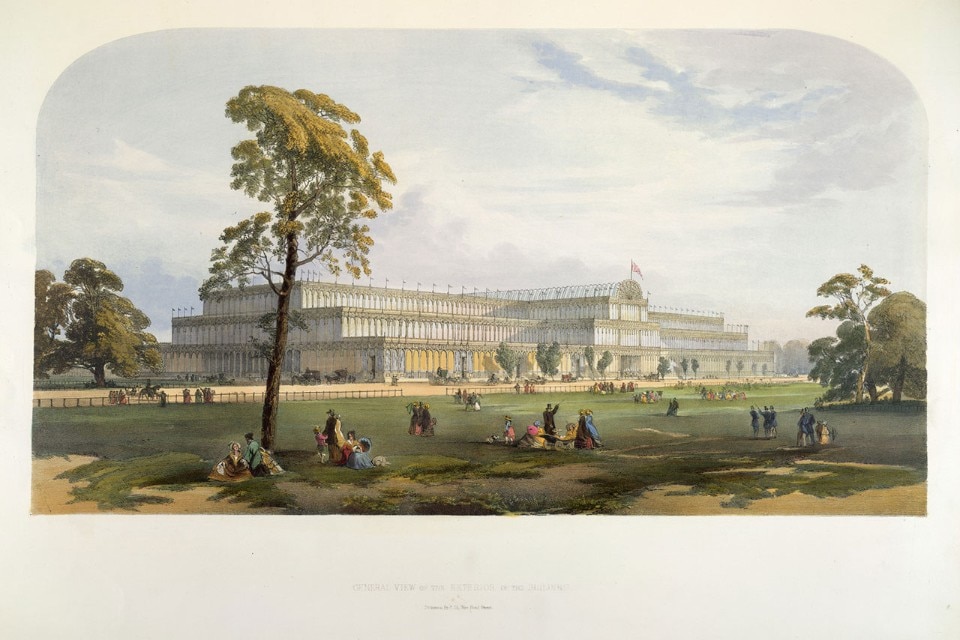 Built in 1851 in London and designed by botanist and greenhouse builder Joseph Paxton (1801-1865), the Crystal Palace is a key building in the history of architecture, not only because of its monumental scale and the many technical innovations involved in its construction, but also because it hosted the first World Expo. The building was named after an article in the satirical magazine Punch by writer and playwright Douglas Jerrold, in which he talked about the building’s translucent and glassy appearance.

[The Crystal Palace] could be considered the first building to clearly unveil the characteristics of the new architecture. We could say that at the same time it celebrates the centenary of modern architecture

The Great Exhibition of the Works of Industry of All Nations in London was organised by Henry Cole (1808-1882), a British civil servant who visited the Paris Exhibition of 1849, an event dedicated exclusively to the products of French industry. He had been impressed by what he saw, and wanted to bring that very same model on an international scale. Cole managed to involve some of the country’s most influential people, including Prince Albert. The group met for the first time on January 11, 1850 with the aim of inaugurating the event on May 1, 1951: hence the need for a venue that could be built extremely fast.

For the participating countries, the Universal Expositions became an opportunity to show the technical achievements of their national industrial production, whose supremacy in those years was contended mainly between the United Kingdom and France. This competition had already caused, since the last decades of the 18th century, a very rapid evolution of industry and mass production. These innovations were also progressively integrated into the field of construction, thereby inaugurating a period of great urban renewal and the development of new building typologies; it is no coincidence that the birth of urban planning dates back to this period. Until then, these construction techniques had been mainly applied to collective large-span buildings, whose environments sometimes required a hybrid condition between inside and outside. These included, for example, the first railway stations, covered markets and arcades (or, in French, passages). The Crystal Palace was precisely the manifesto for a country that was about to show its industrial power at the Great Exhibition.

The Crystal Palace is now a symbol and, as such, sums up history and legend. It is the subject of systematic criticism and anecdotes, just like the discovery of electric light or the steam locomotive.

Following a contest held on 13 March 1850, it was Joseph Paxton’s project in collaboration with engineer Charles Fox that prevailed over the more than 200 projects submitted to the Building Committee, which included architects Charles Barry and Charles Robert Cockerell. Paxton had previously stood out in Chatsworth, where he built the Great Conservatory (also known as the Stove, 1836-1840) for the Duke of Devonshire, which was already quite large: 100 metres long and 30 metres high. The Crystal Palace’s layout was inspired by the Roman, later Christian, basilicas: the main axis had five flat-roofed naves, crossed by a barrel-vault transept. The latter was later designed to protect the centuries-old trees of Hyde Park, an excuse for the conservatives to protest against the London Exposition.

The structure of the building was based on the typology of the greenhouse, and it did not show important differences from it, except for its monumental dimension: in fact, it was the largest building in the world at the time. It was built on seven and a half hectares of land, it was 564x20 metres long and 39 metres high. The building was designed to fit a structural and cladding module measuring 2.44 metres, applied to a structural mesh that ranged from 7.31 to 21.95 metres. The modularity, combined with the prefabrication, was what ensured a very rapid assembly of the components directly on site. Moreover, to facilitate the construction site, each element did not weigh more than one tonne. In just four months, the 92,000 square metres of the building were erected in the big London park.

The decoration and interior design were curated by Owen Jones (1809-1874), an architect, designer and theorist who, based on his studies on pattern and colour for the Crystal Palace, later published the famous volume The Grammar of Ornament (1856). The more than 100,000 objects on display, coming from all over the world - from the first public toilet to the first bicycles, to the largest diamond in the world, the Koh-i-Noor - helped to highlight the products of use, inaugurating the great ritual of consumption.

The chronicle of the time tells that over 6 million visitors visited the structure during the event, which lasted from May 1 to October 15, 1851. Among them, some people was not positively impressed by the Palace, including William Morris and John Ruskin: in his The Stones of Venice (1851), Ruskin defined it as the result of “some very ordinary algebra”.

At the end of the Great Exhibition, Prince Albert decided to continue to pursue the objective of the Great Exhibition, namely the education of the general public, as well as of designers and industrial producers, through a new museum institution. In 1852 the Museum of Manufactures, then South Kensington Museum, directed by Henry Cole, was founded. Today it is a large institution known as the Victoria & Albert Museum.

After the event, the Crystal Palace was dismantled and rebuilt in 1852 in South London, in Sydenham Hill. Over the years, several new purposes were attempted: in 1911 the Festival of Empire was held here, while from 1920 to 1924 it was the Imperial War Museum. Because of the high maintenance costs and its state of deterioration, the building was then entrusted to a special group, under the leadership of Sir Herny Buckland, before being ruinously destroyed by a fire on 30 November 1936.

The quotations in this text are taken from the article Modern Architecture is one hundred years old by Nino Airaldi, in Domus 265, December 1951.