“My architecture can be defined as interstitial (…). I have never belonged to big movements or alliances of thought. I have always lived in a form of space that was cut out for me” (Massimiliano Fuksas, 2011) 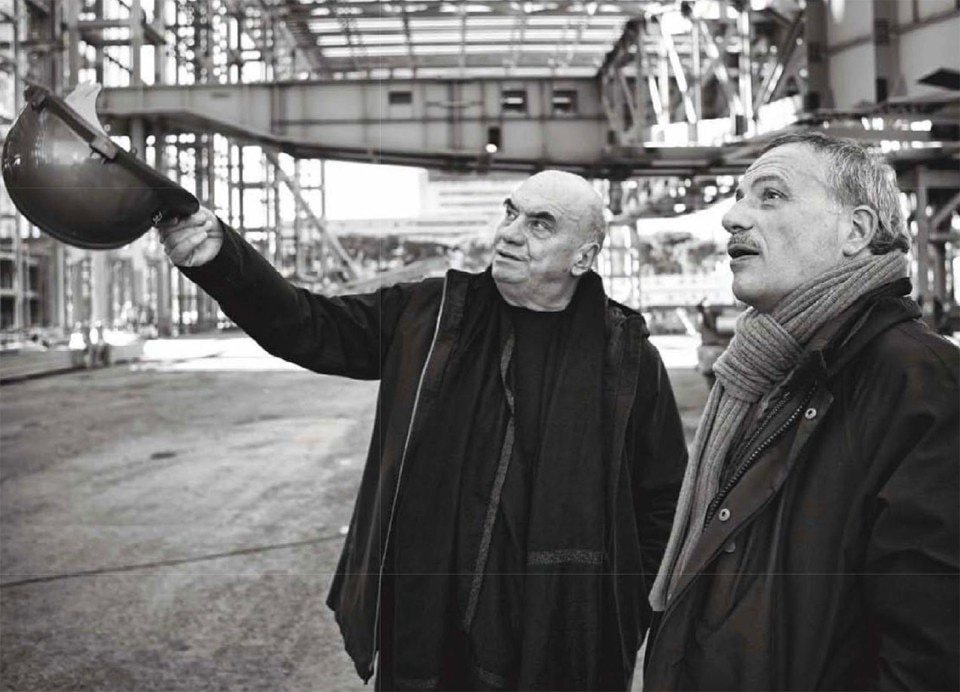 Massimiliano Fuksas (Rome, 1944) has been a leading figure of Italian and worldwide architecture through the last few decades. Trained as an architect, his activity also extends to the fields of urban design and product design.

He graduates in Architecture in 1969 at “La Sapienza” University in Rome, with Ludovico Quaroni as his supervisor. In the same period, he establishes a long-lasting connection with Bruno Zevi, which would be a relevant cultural touchstone for the first years of his career. Above all things, Fuksas inherits from Zevi an eclectic approach to architecture, postmodern as it is devoid of any preconception.

This is clearly witnessed by his early works: he collaborates with Archigram in the United Kingdom, and in Denmark with Henning Larsen and Jørn Utzon, also participating in the conception of Sidney Opera House’s design. The complexity of Fuksas’s curriculum translates his dislike against the doctrines of the Italian academy from that age, as well as against the Tendenza’s drawn, but rarely built architecture.

In 1967 he opens his first office, Granma, in association with his wife Anna Maria Sacconi. Their partnership lasts for two decades, punctuated by several completed projects, mostly in Central Italy: amongst the most important are the Sports hall in Sassocorvaro (1970), in the Marche region, the Gymnasium in Paliano (1979-1985), in the Lazio region, and the City hall in Cassino (1985-1990).

At the very beginning of his professional path, Fuksas shows a clear affinity to that age’s avant-garde, as well as to the rising deconstructivist movement. These references clearly inspire the gymnasium’s spectacular and bewildering main façade, removed from the built volume, rotated and partially sunk into the ground. A tension towards a theatrical conception of architecture, which will remain constant in Fuksas’s work, also surfaces from this same building.

Read also: In conversation with Massimiliano Fuksas, from Kant to AI architects. A talk between epistemology, architecture and art, to the inevitable point: we will soon no longer be needed but in the meantime we can learn many things.

L’Architecture d’Aujourd’hui features the project in Paliano, thus establishing a first link between Fuksas and the French audience and critics. This is reinforced by his invitation to the Paris Biennale in 1992 (by Patrice Goulet) and by his monographic exhibition Haute tension, at the capital’s Institut Français d’Architecture.

It is precisely between the 1980s and the 1990s that Fuksas enters the second period of his career. In 1988 he dissolves Granma and in 1989 he creates Studio Fuksas, with his second wife Doriana O. Mandrelli, establishing his main headquarters in Paris (as of 2020, offices in Shenzhen and Rome are also active).

The relocation to France corresponds to an increase in the number of opportunities, matched by a substantial stylistic evolution. Fuksas distances himself from postmodern and deconstructivist fascinations, defining a more sculptural approach to the architectural object. The outcome is at times simplified, for instance for the Cultural Center and Media Center in Rèze (1986-1991), other times more complex, such as for the Îlot Candie Saint-Bernard in Paris (1987-1996), or more decidedly suggestive, in the case of the entrance gate to the museum of Niaux’s cave engravings (1989-1993).

Through the 1990s, Fuksas rapidly turns into a fervent supporter of an architecture which is digitally conceived, through softwares for parametric design, and digitally represented by its renderings. This evolution determines a further diversification of his designs, both on a formal and a material plan. Screen-printed glass façades and metal mesh canopies in Salzsburg’s Europark 1 mall are in many regards forerunner for this ever more clear turn towards a “digital eclecticism”. A few designs from the following decade confirm this trend, including the Nardini auditorium and research center in Bassano del Grappa (2002-2004).

On the other hand, such projects as the Vienna Twin Tower complex (1999-2001), Ferrari Product Development Center in Maranello (2002-2004) and Milan’s Trade Fair in Rho (2003-2005), demonstrate Fuksas’s ability in providing an interpretation of a more generic International Style, though always featuring some original additions.

Awarded the Grand Prix de l’Architecture in 1997, by curating Less Aesthetics, More Ethics, la 7° International Architecture Exhibition at the Venice Biennale, in 2000, and by publishing Caos sublime (Rizzoli, 2001), Fuksas takes up a clear position in the global architecture culture, claiming the need for a more intense confrontation with a complex reality, even to the detriment of formal preoccupations.

Over the last decade, Fuksas has intensified his activity as a designer (for such brands as Alessi, Poltrona Frau, Guzzini, FIAM), while progressively dealing with architecture and urban projects on a larger scale.

The most representative achievements of this period are Shenzhen-Bao’an airport (2008-2013), “La Nuvola” congress center at the EUR neighborhood in Rome, opened to the public in 2016, and the Skyscraper for the Regione Piemonte in Turin, set to inaugurate in 2021.

In the words of Luca Molinari:

The Venice Biennale in 2000, directed by Italia architect Massimiliano Fuksas turns into one of the most promising moments of confrontation between new metropolitan landscapes, architecture and digital culture. It represents the much awaited public consecration of this phenomenon, and at the same time it raises a serious-minded issue on its possible formal outcomes