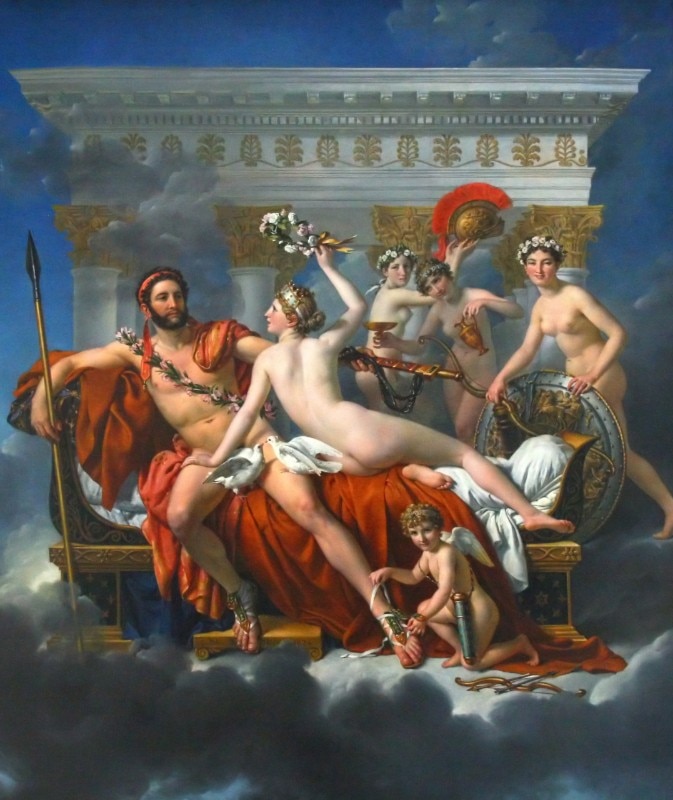 Sleepless nights for the Italian government: first the health and economic crisis, and now a political one – a crisis that was apparently expected for quite some time, but whose reasons remain unclear.

Behind the scenes, a likely fight for power, unclear conflicts over honor, pride, and glory, do not take into account, at least apparently, the current historical moment that is affecting the entire world.

Read also: The course of Empire

In Rome, the capital city of the Empire, which remains to this day the beating heart of Italian politics, one god was particularly worshipped: Mars.

God of war and duels, diuum deus (god of gods), he is often depicted naked, with a long cloak over his shoulders, wearing a helmet and holding a spear or sword and shield. He’s a strong and fascinating man, a god who holds the power of war amongst human beings.

Jacques-Louis David, a painter known for having worked at the court of one of the most powerful figures in history, Napoleon Bonaparte, depicts a hapless Mars being stripped of all his symbols of power. Four women, Venus and the three Graces, together with a small but incredibly important ally, Cupid, are the masterminds of this attack. An imposing canvas depicts equally imposing bodies – antagonistic figures in their allegories and the painting, from the space of the work to the space around the work – elaborating an unprecedented theft: the conquest of the god’s power.

Venus, the goddess of beauty, described throughout the history of art very often naked, lying on a triclinium, seduces Mars, encircling his head with a crown of flowers. He appears completely bewitched by this beauty, which has no equal on earth or Olympus and does not even realize that Cupid, the god of love and son of the seductive goddess, has already managed to untie his shoes. The little cherub complacently looks at the spectator, almost as if to suggest silence, without any fear of being discovered, certain that his mother’s beauty will once again be fundamental. The great hubbub and confusion reach the right corner of the small temple, illustrated by David in the classic architectural style of ancient Roman monuments, which, hidden among the clouds, serves as a shelter for the three Graces. There, they place their helmets and shields while one of the three, under the pretext of comforting the two lovers, offers a glass of wine to the god, but this is just a pretext so that the god lets his guard down. Drunk and intoxicated by the woman’s beauty, he decides to get rid of his spear, ready to throw it away in a corner of Olympus, thus losing his charm, and above all his power, which gradually dissipates and disappears in the thin clouds.

Read also: The Tree of Life

This was the last work painted by the 73-year-old David, on which he worked during his stay in Brussels, where he spent his exile after the fall of Napoleon. Through this work, the fervent and revolutionary French artist seems almost to have wanted to finish by his hand the story he began at the court of the military genius. He recounted his deeds, his strength, his stubbornness, portraying him as the emperor. That that monarchy, soon after being restored, represented nothing more than the fleeting charm of a beautiful woman who had seduced the French, robbed of their conquered glory. A god, a powerful emperor who was not understood, betrayed, and forced into exile at the hands of other nations, at the hands of other handmaidens.

Lev Nikolaeviç Tolstoy wrote: “The temptations of power and of everything which it gives, of wealth, honors, luxurious life, present themselves as a worthy aim for the activity of men only so long as the power is not attained; but the moment a man attains it, they reveal their emptiness and slowly lose their force of attraction, like clouds, which have form and beauty only from a distance”.