The course of Empire

From Thomas Cole’s evocative works to the attack on Capitol Hill – images recalling the crowds of protesters against the US Congress. 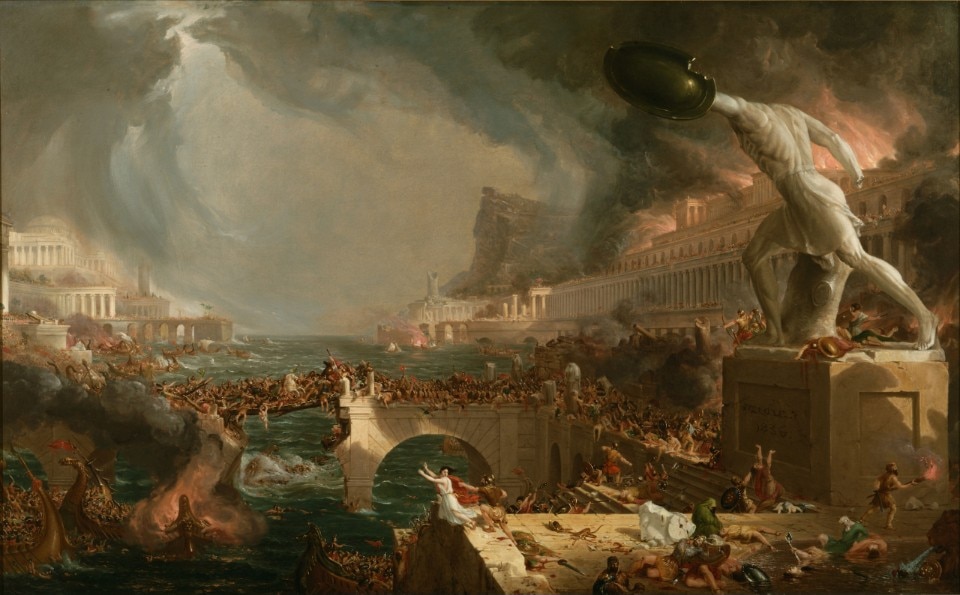 Clashes inside the Capitol of the United States of America on the day the House and Senate certified the victory of Joe Biden and Kamala Harris. What happened in Washington is an unprecedented event that shook the entire world. Groups of pro-Donald Trump protesters, some of them armed, broke into the United States Capitol complex. Outside and inside, all sorts of things happened – clashes, gunfire, tear gas, a real attack.

“There is the moral of all human tales;
’Tis but the same rehearsal of the past.
First freedom and then Glory – when that fails,
Wealth, vice, corruption – barbarism at last.
And History, with all her volumes vast,
Hath but one page...”

In these few lines from the book Childe Harold's Pilgrimage, poet George Gordon Byron summarizes with great foresight the historical moment that the United States of America is currently experiencing. This literary work also inspired a cycle of paintings by British-born American artist Thomas Cole called The Course of Empire.

Cole was a leading exponent of the Hudson River School, a mid-19th century art movement embodied by a group of American landscape painters who focused on three themes of great interest at the time – discovery, exploration, and settlement. He summarized the history of the United States in five romantic landscape paintings: The Savage State, The Arcadian or Pastoral State, The Consummation of Empire, Destruction, and Desolation. In the fourth episode of the cycle, whose title is Destruction, Cole seems to forecast the same violent event that took place a few days ago at the Capitol. Fire, flames, revolts. The sack and destruction of the city is the theme of the painting. The scene takes place during a clearly visible storm, which is a metaphor for the subject of the painting, while a fleet of enemies invades and overthrows an imaginary city by setting it on fire and killing its inhabitants and defenders. The attack is described during its final phase, where the connecting bridges have collapsed, the columns have fallen to the ground, and the fire is ravaging the palace on the right, which is reminiscent of the neoclassical style of the American Capitol.

In the foreground, on the same level as the burning building, there is the beheaded statue of a hero portrayed in a pose that reminds us of the Borghese Gladiator. The hero seems ready to defend himself and move on, towards a future that is now uncertain and dangerous.

The scene reminds us of the many paintings depicting the sack of Rome, a chronicle of the devastation and attack on the most powerful city at the time. The epilogue of the sack, the spoliation of works of art, the deaths, and the violence perpetrated, brought to the minds of contemporaries those fears that were thought to belong only to past centuries. The myth of Rome's historical and spiritual greatness dissolved in May 1527, while the myth of America's democratic power seems to have suffered a severe attack on 6 January 2021. An attack right at its political heart, at a symbolic moment for citizens preparing to welcome a new President, which undoubtedly undermines the idea of democracy that has always distinguished America. In the final episode, Cole deals with the theme of desolation. He paints the remains of the city in the bleak atmosphere of a day that seems to be coming to an end. The landscape is similar to that of the first episode, The Savage State, without any human presence, where the architectural ruins, once alive and inhabited, are now hidden by thick vegetation. A sad and decadent image symbolizing the end of an empire, of a great state, which, careless and weakened by political mismanagement, has reached bankruptcy.

For America, 20 January will be the date of a huge change – the day when the newly elected President swears on the Bible to preserve, protect and defend the constitution and thus the State, a united and democratic State.