One, infinite, motionless: the Universe

Homer wrote about it, modern men are exploring it. But what about painting? A fusion of many practices, themes and ideas, mostly reproduced on the vaults of old palaces and chapels – by staring at the ceiling, we discover the secrets of the universe. 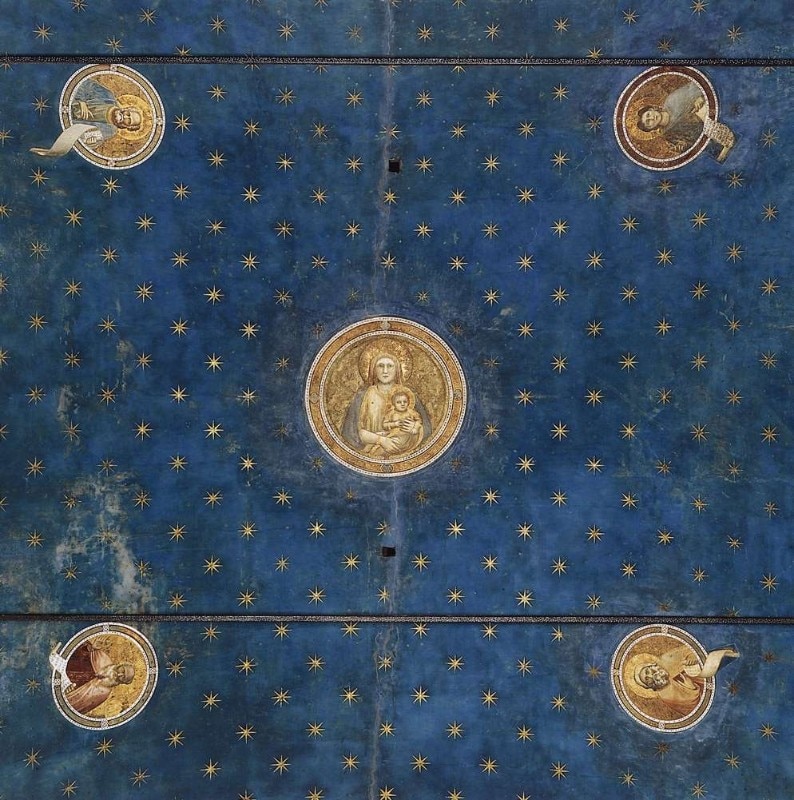 On Sunday, 15 November at 7:27 pm, four Crew Dragon astronauts headed to the International Space Station were launched from the Kennedy Space Center in Florida.

The universe is the oldest history and the most intriguing mystery – what’s beyond the blue sky? Which planets? What are they made of? Are there other forms of life?

The universe, the space, the sky – all symbols of a higher dimension inaccessible to humans – was filled by our ancestors with a multitude of divinities. This great game of celestial powers was skillfully handed down to us through the language of myth, and thus through the language of art. One of the first descriptions of the firmament can be found in the 18th book of the Iliad, where Homer recounts the construction of the Shield of Achilles forged by Hephaestus: “Five were the layers of the shield itself; and on it he wrought many curious devices with cunning skill. Therein he wrought the earth, therein the heavens therein the sea, and the unwearied sun, and the moon at the full, and therein all the constellations wherewith heaven is crowned—the Pleiades, and the Hyades and the mighty Orion, and the Bear, that men call also the Wain, that circleth ever in her place, and watcheth Orion, and alone hath no part in the baths of Ocean”. With these words, the contemporary man who knows the space and the universe is offered a mythical image of the celestial vault, where the stars and the divine dimension are deeply connected.

Read also: The portrait of the President

In the Pelagic myth of the creation, which was invented in the Greek continent in pre-Hellenic times, the Titans, children of the primordial parents Uranus (Sky) and Gaia (Earth) held up the celestial heavens: Hyperion and Theia governed the sun, Phoebe and Atlas governed the Moon, Dione and Crius goveredn Mars, Metis and Coeus governed Mercury, Temhis and Eurymedon governed Jupiter, Thetis and Oceanus governed Venus, and Rhea and Kronos governed Saturn. In Christianity, the pagan gods were later replaced by angels and archangels (each of whom governed a planet) but also God, Jesus Christ and the Virgin Mary, or even the Holy Spirit who reigns and watches over the entire globe. A perfect representation of this idea, of this different conception of the universe, is painted by Giotto on the vault of the Scrovegni chapel, where the sky is filled not only with the stars, but is also enriched by the presence of the divine – circles contain the images of the four evangelists, and in the middle we find the Virgin Mary holding the Christ Child in a typical medieval representation that the great Florentine master used only for the vault, while for the walls used another style.

“And finally I ask you, O foolish man: Does your imagination first comprehend some magnitude for the universe, which you then judge, to be too vast? If it does, do you like imagining that your comprehension extends beyond the Divine power? Would you like to imagine to yourself things greater than God can accomplish? And if it does not comprehend this, then why do you pass judgment upon things you do not understand?” These are the words of Galileo Galilei, father of modern science and astronomy, who lived in the same years of a great artist, Giovanni Antonio da Varese known as Vanosino, who between 1573 and 1574 frescoed the Sala del Mappamondo on the main floor of Palazzo Farnese at Caprarola. Maps and allegorical personifications of the four continents decorate the entire room, together with portraits of great explorers and navigators. However, as we look up, the scenes change –  space, planets, constellations, zodiac signs and ancient myths, all enhanced by an extremely vivid blue.

Read also: “Then was the fear a little quieted”

Each element is easily recognizable through its distinctive features: Orion the hunter, the Ursa Minor and the Ursa Major, Perseus with the head of Medusa, Andromeda chained to the rocks. The names and positions of the depicted constellations correspond to the classifications of the Alexandrian astronomer Claudius Ptolemy (100-178 A.D.) whose mathematical system put an end to the sacred observation of the sky.

We find Jupiter, the only deity painted on the vault, with his ever-faithful eagle and his lightning, which in this precise context tend to indicate the heraldic deeds of the Farnese family. The Milky Way is a white and light ribbon that winds through the universe wrapping and accompanying the figures that inhabit it. The ship Argo, perfectly recognizable and represented without any allegory, is among the most important figures of classical astronomy, but this is one of the last representations in celestial maps because in the mid-eighteenth century it was dismembered into three different constellations: stern, hull and sail. An overturned quadriga alludes to the myth of Phaethon, son of Helios, who fell from Jupiter into the river Eridanos for having driven in a reckless way the Sun chariot, a myth and a representation that allude to the cosmic catastrophe from which would have originated the deviation of the solar orbit and the inclination of the Earth’s axis.

A faraway place, as divine as it is earthly, infinite in terms of space and time, fascinating in its mystery, attractive in its swarm of stars, but more famous today than in the past of which we have just told you about.

Read also: The five senses during the pandemic era