And their spirits live on, a performance by the Norwegian artist Marianne Heier in Brera and at the Oslo Biennial provides a re-reading of a number of antique statues, showing how topical they can be. 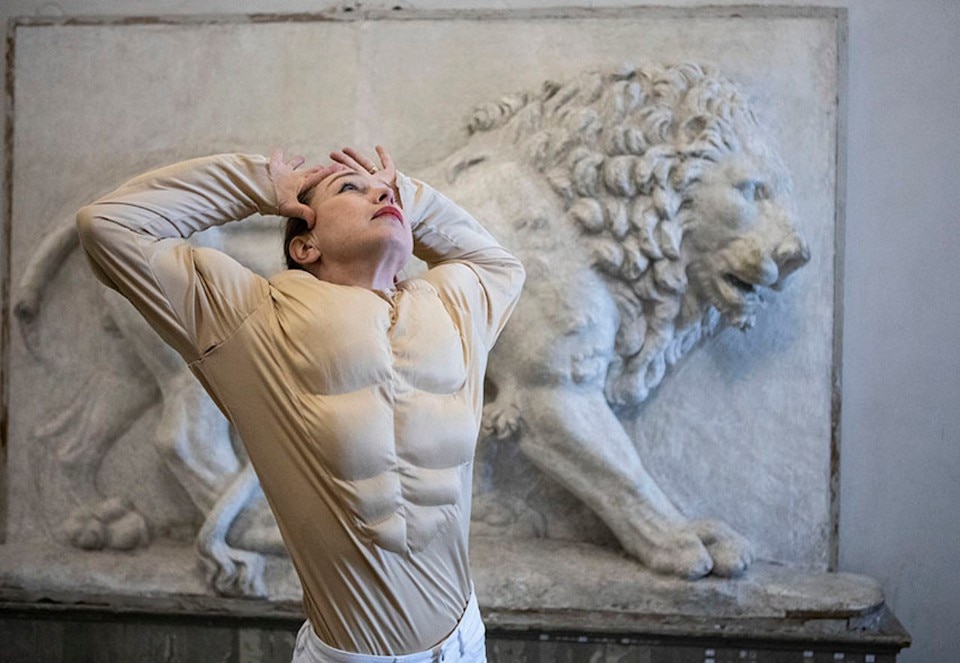 5 May in Milan was an open museum day, and a long queue filled the courtyard at Brera for the gallery, but the actual destination was the Brera Academy, where copies of famous ancient and Renaissance sculptures fill the corridor. There, Marianne Heier was about to begin her performance And their spirits live on for a decidedly smaller audience.
Heier, who has been living in Italy for many years and has studied at the Brera Academy, presented a conversation with seven sculptures, from Flora Farnese to the tomb by Michelangelo for Giuliano de’ Medici, Duke of Nemours.

Dressed in white, with a flesh-coloured top and a breast-piece reproducing the muscular torso of a Greek-Roman statue, Marianne presented herself as a guide, complete with microphone. She read and interpreted, with gestures that varied from the calm tones of a guide, through irony, right up to those of a rock star. A stunning and complex piece. What was striking in this highly studied performance was that the artist kept her wedding ring on, and it was no mere oversight. In the invitation, Heier is shown photographed in front of a kitchen in a pose vaguely reminiscent of Charlie Chaplin, resting on a broom. I believe that the idea was to recall the 70s feminist slogan: “The personal is political”.

The work highlights the contemporary potential of the sculptures, and overall of the history of art. A tribute to culture and an encouragement for younger generations to become involved, not so much in the sense of the classic meaning, but more of the civil values that it represents, contradictions and all.
In fact Heier uses the sculptures, or rather the text that describes them, made up of multiple fragments, to examine topical themes and question the use that power – not only political but also cultural – makes of symbols, touching on matters of gender and promoting action.

In the final part of the performance, 25 students lined up along the corridor, also wearing the same breast-piece and also acting as living sculptures, thus embodying classic culture, and sang Bella ciao, the symbolic song of the Italian partisan movement which has since been covered all over the world – there are versions in 27 languages, according to Wikipedia, sung by greats such as Tom Waits, among the more recent, or by the Italian Modena City Ramblers in the ‘90 and by Yves Montand in the ‘70s and Milva in the ‘60s.
The result is a performance that is at the same time “high and low”.

It brings together quotes from Die Ästhetik des Widerstands (The Aesthetics of Resistance), the novel in three volumes by Peter Weiss, published in 1975, that examines the resistance to Nazism by a group of students who meet up in museums and galleries – Heier above all addresses youngsters – and Barbara Kruger with Untitled (Your body is a battleground). And the bodies of women are still, now more than ever, “battlegrounds”.

The work is not restricted exclusively to the female body, and we have the Barberini Faun, based on a Greek original dating probably from circa 300 B.C. As Heier says: “It is impossible to fight nature... You can’t make it human. You can’t even make yourselves human. We are all animals.” And then: “The faun or satyr is a human-animal hybrid, connected to divinity”. Sexuality is therefore both animal and divine, and in this specific case also homoerotic – nothing new, as those who study know very well. The Barberini Faun is drowsy, drunk, sexually available. Dizziness, sexuality and animality are part of us. It is us. This is the message of those marvellous ancient sculptures, if we are willing to listen.

Heier has chosen her statues carefully, thus presenting the Athena of Velletri, the goddess of warfare and of justice, wearing around her neck the snakes from the head of Medusa – the beautiful priestess who was transformed into a monster after being raped, according to the version by Ovid, thus presenting a victim who becomes a villain – as well as war with Menelaus and Patroclus, and abuse of power, slavery and poverty with the Farnese Hercules.

Hercules, the victim of a plot by the gods since he was born, met the poor and the slaves. He followed them, thinking he was to find freedom. He was once again deceived, the king who had promised him the hand of his daughter had the slaves locked up during the celebrations, and everything he had gained was destroyed. Here, Heier makes use of a free interpretation of Peter Weiss’s version of the story, and adds a phrase from Mein Kampf: “It is unbelievable to what extent one must betray a people in order to rule” (also used by Inge Scholl in The White Rose, Wesleyan University Press, 1970, p. 77). But we also have the words of Michelangelo Buonarroti explaining his work to Giovanni di Carlo Strozzi, and Venus, the pop song by Robbie van Leeuwen, from 1969.

The result is no post-modern pastiche, although the technique seems to be the same: the artist, her body and voice, strike the eyes and ears of those present, the sculptures are seen with respect, the students approach, a slight shiver runs down the spine and the group dissolves. Marianne smiles and we leave, with the certainty of having seen a work that is worth the time, an hour, that it lasts.

It does not go unobserved that a public organisation on the sidelines of Europe is financing an artist in order for her to be seen at the “centre” – at the Brera Academy, where thousands of artists from all over the world train in what is currently one of the most interesting cities. It is a way of promoting the first edition of the Oslo Biennial which, despite the name, is a five-year programme of art in public spaces, where the performance has been repeated.

Title:
And their spirits live on
Artist:
Marianne Heier
Curated by:
Eva González-Sancho Bodero, Per Gunnar Eeg-Tverbakk, Alessandra Pioselli
Where:
Milan and Oslo