Surprises and reconfirmations at the 23rd edition of miart

The Italian Art fair relies on quality and a brilliant communication strategy plus openings and important exhibitions in public and private museums all over the city. 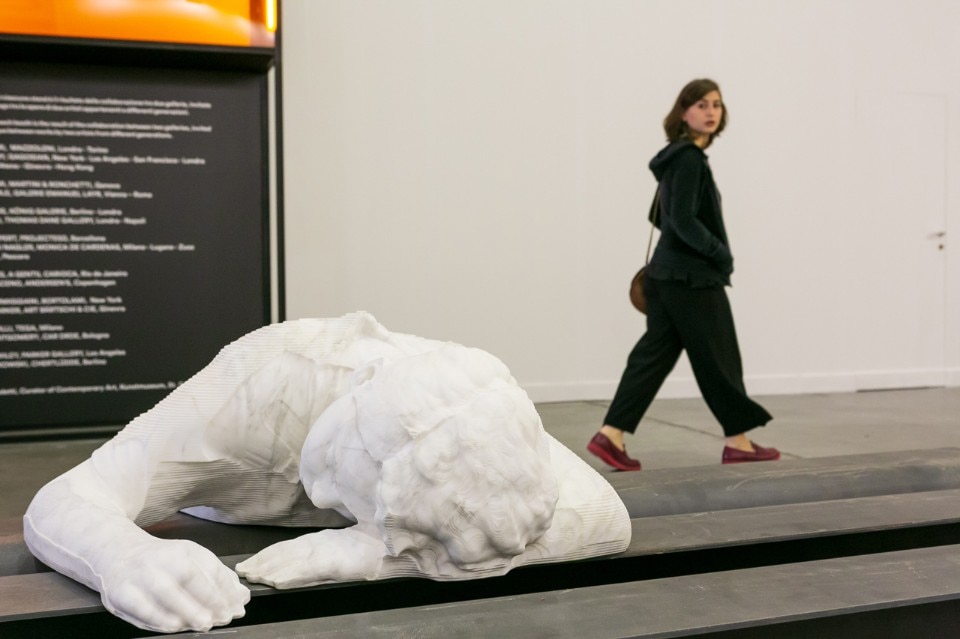 Having reached its 23rd edition, this year miart presents itself to the public as a kaleidoscope of individual stories in order to showcase the contemporary art market. Perhaps by now it's always like this for any event devoted to this exceptional merchandise that walks the fine line between culture and market value; however, we should note that this approach holds especially true for the Milanese fair in recent years. Alessandro Rabottini, now undergoing his second test as director, continues to clarify his role: more than an impresario, he's an art curator and organiser of that always comprehensive organic entity that is a fair. This can be inferred from many steps that, on different levels, have transitioned miart from the preceding directorship of Vincenzo DeBellis (with whom Rabottini worked closely) to the current one; these events include both the increased efforts to involve public and private institutions as well as non-profit spaces, and the busy schedule of talks. The wish to provide miart with an adequate background aims to compensate Milan's geographical location and size which, on the one hand, doesn't allow the fair to rival attendance records of other capital-city competitors; however, in other forms of comparison, miart is free to dictate its clear and culturally vivacious identity that is on an equal par with other art fairs.

While we are on the subject of visual arts, anyone familiar with the city in recent years knows that, after decades of almost total anonymity, miart has at last provided itself with a convincing image; the newfound identity, unique on the international scene, is the result of one of the most sophisticated and innovative coordinated images now in circulation. Moreover, this year Rabottini's curatorial plan has devised the PRISMA project which, essentially, calls for art to communicate art. This is achieved through a campaign entrusted to choreographer Alessandro Sciarroni (who set the miart ball rolling at the Triennale's Teatro dell’Arte last Wednesday with the show directed by Umberto Angelini) flanked by the Masbedo  video artists, who used Alice Schillaci's photographs and Mousse Agency's arrangement to do a fine performance in the expanded real/virtual space of the fair.

Read also: Masbedo at miart 2018: The present has many stories

A stroll through the stands this year doesn't give the impression that the number of participants has increased, yet there are now 75 foreign galleries representing 19 countries. This is all to the good because one of the most appreciated features of the fair is its relatively small size (184 galleries); the aim is to promote a format where selection ensures, 99% of the time, quality and importance. The professional planning referred to above is appreciated by exhibitors and public alike and it takes a structural role in such different sections as On Demand, Decades and Generations; this year as well, the latter probably expresses the best of miart and provides the brightest showcase for the curatorial choices.

It’s precisely this edition’s Generations section that hosts the miart debut of the powerful Gagosian Gallery; the title has prompted the organisation of an intergenerational dialogue between the gallery’s German artist star Sterling Ruby and the Italian master Alberto Burri, shown by Mazzoleni. It must be said that in spite of all the intense hype surrounding the participation of Gagosian (who, for 10 years, has had a space in Rome but has never been seen at an Italian fair), the result is not one of the most exciting: Ruby’s unimpressive works all but disappear when brought into comparison with Burri. More lively and successful is the pairing suggested by the paintings of Birgit Megerle (Emanuel Layr) in dialogue with the extraordinary portraits of the 94- year-old photographer Lisetta Carmi (Martini & Ronchetti), similar to the Mapplethorpe-Rondinone duo, both shown by Barbara Gladstone.

The best galleries have learned to align themselves with a trend: to showcase a selection of works by one artist, a choice that undoubtedly helps visitors concentrate on a single art figure and his vocabulary. Moreover, this procedure eliminates the sensation of being confined to booths crammed with stuff, making the experience more pleasant and focusing on the strong individuality of the artist. Examples can be seen in the solo shows by Carsten Höller (Galleria Massimo De Carlo), the quality trial run by the Philippino artist David Medalla (Astuni) or by Matt Mullican (Mai 36) whose works are also displayed, at the same time, towering over the large show just opened at the HangarBicocca. The Italian Alessandro Pessoli (Zero…) has done an excellent job as has Stephen G. Rhodes' in his powerful one-man show (Isabella Bortolozzi).

Although the contemporary works are central, as is right and proper in a fair of this kind, there is also a solid presence of modern art by many galleries covering, especially, the Italian avant-garde movements and Conceptual Art. However, it must be pointed out here that, as opposed to the rest of the fair, this section has a distinct sensation of déjà-vu since many, too many, artworks are proposed exactly the way we remember them from last year. The section titled Object and devoted to design is rather weak (perhaps the imminent beginning of Design Week has been a handicap), with the exception of the Galleria Luisa Delle Piane that offers highly selective pieces of sophisticated design.

Among the surprising discoveries and the most particular artworks on view, we recall the works by Radical architect Gianni Pettena (Bonelli); pieces by the master of the New American Cinema Jonas Mekas (Apalazzo); the newest art by Chinese artist Sun Xun, who can also be seen in the group show “The Szechwan Tale” (just opened for the fair at the FM Centro per l’Arte Contemporanea di Milano) and is represented by the Hong Kong gallery Edouard Malingue, seen this year for the first time at miart. Other works deserve closer examination such as the ones by Sarah Charlesworth and Liz Deschenes offered by Campoli Presti as well as the piece staged by Mexican artist Teresa Margolles  (Peter Klichman); her work, also, was already on view in Milan in the important one-woman show at the PAC. Italian artists are well represented, for example there are a couple of sculptures by Patrick Tuttofuoco (Federica Schiavo Gallery), photographic pieces by Marcello Maloberti (Raffaella Cortese) and historical works by Ketty La Rocca.

So, summing up, we can say that this 23rd edition confirms the successful and well-calibrated format of recent years, favoured by a city like Milan that is still enjoying the fruits of political and economic circumstances that place it more and more frequently at the centre of transits and vocabularies: from design to fashion, the arts reciprocally contribute to making the capital of Lombardy a captivating and contemporary destination. If the Bologna art fair has progressively lost ground and Turin's Artissima dialogues with a very precise niche, miart enjoys that multifaceted prism that its own image suggests. Now let's make way for the imagination, certainly not lacking among Rabottini's team, to think up the next format that will continue to make the Milanese fair an ever more central event in the art world agenda.