Masbedo at miart 2018: The present has many stories

The duo of video-artists talk about how the latest project for miart came about, developed together with the photographer Alice Schillaci, with a precise objective: “communicate art with art”. 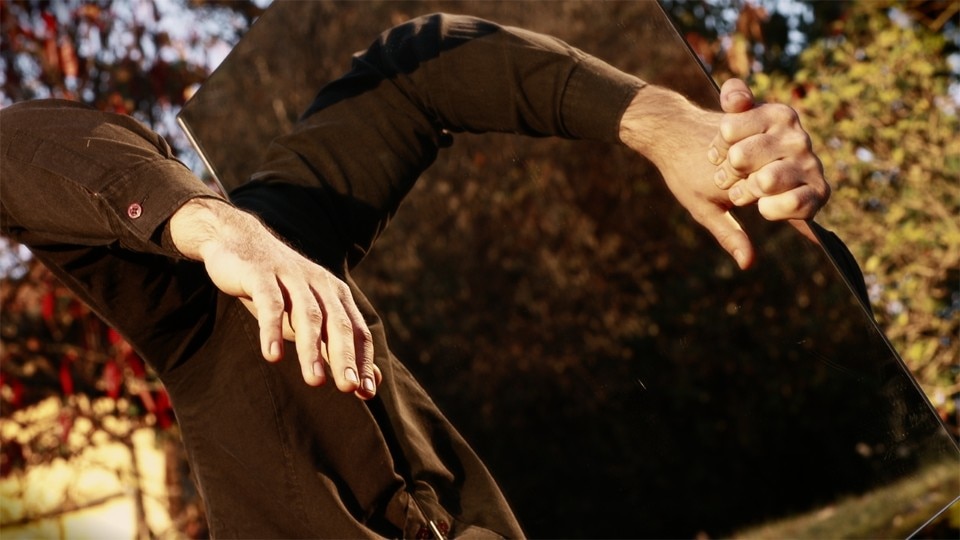 Since October 2017, miart has been publishing, on social networks, websites and magazines, images and teaser videos for “Prisma”, a stratified communication campaign, the design of which has been entrusted to the duo of video-artists Masbedo and the photographer Alice Schillaci, brought together under the artistic directing of the Mousse Agency. This blend of disciplines is also spread through the city via the official collaboration between miart and the Fog festival: the fair (from 13 to 15 April) will in fact be showing the video work, while the evenings of 11 and 12 April will see the staging of the performance on the stage of the Teatro dell’Arte at the Triennale. A complex project which was explained to us by Masbedo.

How did “Prism” come about?
Alessandro Rabottino (the artistic director of miart, Ed.) had the intelligent idea of communicating art through art, and so he called on us, proposing that we work together with Alessandro Sciarroni. His idea was that together we would have been able to create something that was visually powerful, tied to the theme of dreams and identity. Following an initial discussion period, we decided to work on a form which came from the beginning of a production by Sciarroni, “Cowboys”, during the choreography of which the performers used mirrors. The idea of working on this aspect with video almost came naturally.

What will we see during the fair?
There will be videos at the entrance to miart and a performance at the Triennale. It will be a kind of cross-over form of featuring, with the videos more Masbedo featuring Sciarroni, and the staging at the theatre instead Sciarroni featuring Masbedo. It is officially a communication campaign, but we have given it a level of attention that we usually reserve for an artistic project. It is a complex project.

Read also: Fondazione Merz presents a project by Masbedo based on the theme of lack of communication and involving different languages, topics, and subjects.

How did you work with Alessandro Sciarroni?
It was necessary to find a way to move along the same lines, and it was natural to work on a kind of strange lightness and suspension created with mirrors, even if in reality there is nothing light about these performances, as it is very dense, even from a musical point of view. The world of Alessandro Sciarroni is minimalist and very precise. In order to enter, one has to have the right level of delicacy, otherwise one risks making mistakes, but we found the right balance.

What will we see in the Teatro dell’Arte?
The performance as we have conceived it together is a kind of loop, in which the spectator can enter and exit as they like. There will be three very particular moments, also highlighted by two very different musical structures (one is that in which the music of Bright Eyes plays, almost a contusive element). However, in this case we have worked with Alessandro Sciarroni on the structure of the performance, and rather that flooding the stage with the videos, we have worked through subtraction. We focused more on the apparatus of construction, for example providing an almost film-like dimension to the stage, which recalls the classic 16:9 of cinemascope, or together choosing to work with the music of Abul Mogard as it is in line with the use of refraction, his is a world of harrowing sound environments which repeat. It is a performance in which, at the end, the subject is the mirror, and the video is absorbed into the refraction, but what is interesting is that no-one will see where this video comes from.

Why “Prisma”?
Because we liked the idea of the refraction of colour, in a lysergic sense. If one thinks of a kaleidoscope for example, this produces images which cannot be associated with reality. Also, the basis of any device which produces an optical image is a pentaprism, and this seemed to us to be a positive element.

We spoke of identity, and thinking of the images that we have seen over these few months, I wondered what the role of identity was in this work? There are mirrors which deny individual identity (in some way contradicting their very function), but there are also faces which are multiplied...
In all honesty, it is not so much a matter of negation or multiplication of identity, as the transformation of mirrors into creative devices. The theme is almost more dreamlike, as in the mirror the face is substituted by a surprising image. The great territory of this work is the magic that opens onto emotive landscapes and temperatures. For example, in the part in which the performers interact, suspended, with the mirrors, which are real and therefore capable of causing harm, their body is distressing and gives the impression of a wound of identity in which, however, the mirrors become a peep-hole for the imagination.

In your work you have often gone beyond the boundaries of the world of art. This time you took on a terrain which is very much debated also from a historical point of view, that of the encounter/clash between art and communication...
Well yes, let’s say that going beyond comes naturally to us. But even in this case it just happened, we didn’t plan it. On reflection it is fairly incredible because all of our work focuses on incommunicability. The idea was that of creating something which almost recalls a kind of shamanic beauty. What is interesting here is that the subject is imagination, the aim is not to present a product, but to tell a story, also in accordance with the claim of miart this year, which is that “the present has many stories”. The aim is to communicate art with art.