The Amazon TV series does not tell a true mafia story, but a realistic one. And it also does so through architecture – such as the bridge that has been talked about for decades and a curious water park, which actually exists but is located far from Sicily. 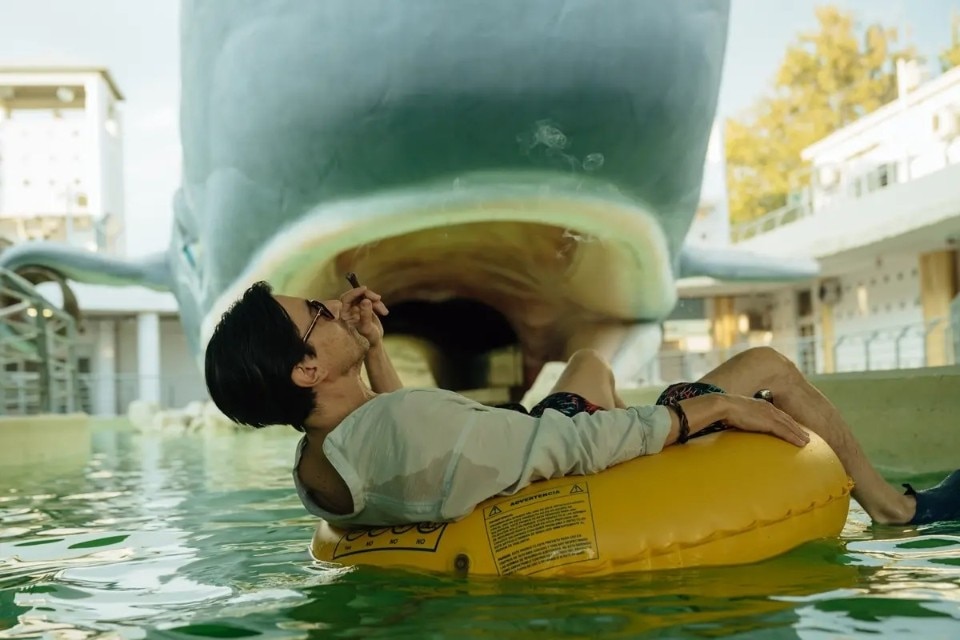 At the end of the first episode of The Bad Guy – the Italian crime, grotesque, paradoxical TV series on Prime Video – it is clear we are not in our world; we are not in our reality but in one slightly similar to it. The plot is about a combative judge who fights the mafia. At some point – after failing to capture a major boss – he is framed. Someone planted evidence in his house of his collusion with crime. The courts convict him. He is arrested. This traumatic event will lead him to become exactly what he claims not to be in order to get his revenge: a criminal colluding with the mafia.

The fact that the story is set in an alternate present where all we fear can easily happen is never mentioned, but there are two details that make it clearly visible: a filmic detail and an architectural one. The filmic detail is the slight cartoonish expressiveness of everything: too much characterization of the characters, too exaggerated decisions, too radical consequences to be all realistic. On the other hand, the architectural detail unsurprisingly shows up in the first episode, when the tone of the TV series is set. It is the place where the accident occurs that frees the wrongfully detained protagonist in transit on a police vehicle: the Strait of Messina Bridge.

It is the most famous and iconic imaginary architecture in Italy, a bridge whose construction has been promised for decades but has never been realized. In fact, its construction can only be realized in computer graphics for now. It would connect Sicily to the rest of the country and is the subject of continuous debate. Some consider it a crucial tool for Sicilian economic advancement, others a gift to the mafia and its businesses. Its construction is impossible for some and instead only difficult for others, it has been promised by politics since the postwar period to get votes and send messages to the electorate about their own positions (it is universally considered a right-wing proposal).

When it appears in The Bad Guy, it is the equivalent of El Dorado or Atlantis, a structure that has only been told and imagined about, glorious in its grandeur and stunning for merely existing, real only in a TV series. And it is on this very bridge that the accident that frees the protagonist and allows him to escape occurs, but ironically, reiterates one of the best-known theories, namely that the bridge cannot be made while avoiding mafia collusion and thus corruption and faulty construction. The accident in fact is a sudden collapse of the structure. And promptly Italian politics, the real kind, felt the need to condemn the TV series for how it “represents negative stereotypes about southern Italy.” National folk mythology cannot be affected without any consequences.

The clever use of fictional architectural structures in The Bad Guy is also clear in later episodes with the headquarters of an underworld arm located in a soon-to-open water park. In contrast to the bridge, this is not fictional, dystopian architecture, but a monument that serves as a backdrop for mafia infiltration. An enterprise similar to those in the North – it is no coincidence that scenes were filmed in a real park in northern Italy – but clearly in the hands of crime. Such strong control as to make it a kind of inaccessible villa, amidst puppets, colorful signs, slides and poorly maintained swampy pools.

Actually, the idea is all in the design. It is not the mafia park or the typical neglected park of those who do not have big business goals but rather a park with an extremely elaborate and coherent design, with the same fonts, the mascot animals, the music playing all the same harmonies. There is a very specific brand identity in that water park that may never open, and it is on the other side of the spectrum of meaning from what goes on in there. It is not Ken Adams’ set designs for the Spectre of the 007 films, tailor-made to tell the story of that criminal association, but their logical opposite, the complete semantic change of the symbolic mafia universe that superficially mocks it but actually enhances its violence.