Charles III the architect, and the ideal village of Poundbury

The new king never hid anti-modernist ideas about architecture and ecological visions, which found practical realization in a neo-traditional style village designed with the collaboration of Leon Krier. 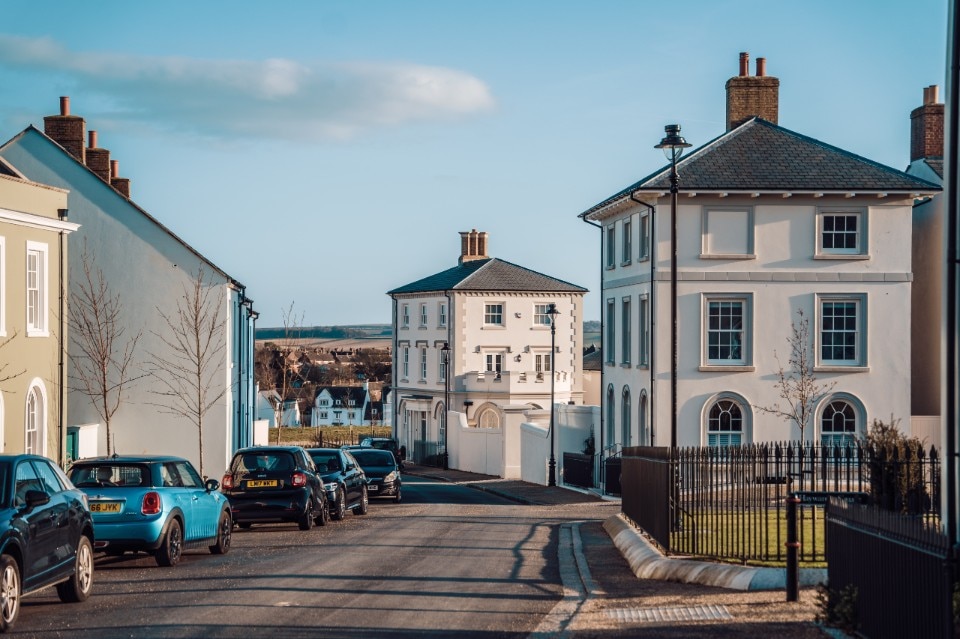 It was in 1984 when Charles, then Prince of Wales, gave his famous speech to the Royal Institute of British Architects criticising modern architecture and argued for a return to more traditional buildings. The speech was a direct reaction to Peter Ahrends’ competition-winning design for the National Gallery extension. A project that later fell into oblivion, to be replaced by the more accommodating proposal by Venturi-Scott Brown.

Criticism of the outcome of the 1984 competition made known the architectural ideas of Charles III and their proximity to those of Leon Krier, collaborator of his since the mid-1980s. In his youth, Krier had contributed to the evolution of the thinking of one of the masters of late modernism and brutalism, James Stirling, anyway he was quickly labelled as a simple postmodernist.

Krier was the right ally to realise the idea of a late 18th century neo-traditionalism, both in the appearance of the buildings and in the urban layout. The opportunity presented itself with the construction of the town of Poundbury, the ‘ideal’ village built in the territory of the Duchy of Cornwall near Dorchester in Dorset.

The architecture of Poundbury, built over time by a motley entourage of loyal architects, is a pout pourri of playfully juxtaposed styles and elements, made up of flint-clad cottages and Scottish baronial mansions, Palladian villas and miniature pink Gothic castles, and dominated by a rich apparatus of arcades, pillars and mouldings. Various extensions since the 1990s include a Greco-Roman-style square and neoclassical buildings that have contributed to the general derision of architecture critics the world over: a Disneyland for a prince playing at being an architect and town planner, a neo-medieval pastiche much like certain Mediterranean-style outlets and Beverly Hills’ Rodeo Drive.

Almost thirty years later, however, work began to complete the plan, supported by the growing demand from families and the community of more than 3,000 residents, with around 1,500 homes and 2,000 jobs in 185 companies. An urban mix of industry, shops and small businesses mixed with townhouses, apartment blocks and squares, organised with the idea that it is the building blocks that define the street pattern and not vice versa. Krier’s plan holds up, and its effectiveness is due to the density factor and that sense of community also generated by the aesthetic uniformity of the picturesque theorised by historian Nicholas Pevsner in Visual Planning and the Picturesque, later taken up by Gordon Cullen's Townscape movement and on the pages of The Architectural Review, and finally revived in the New Urbanism of the 1980s and 1990s.

Architect Ben Pentreath, who worked on the construction of much of Poundbury’s architecture, speaks of a false architecture, persuasive as wallpaper under which everything, in the end, is the same thing. The question then arises as to whether it is really the reference to tradition in the facades and materials that is a determining factor, and what is so different from the contemporary approach.

Poundbury’s partial success is re-evaluating the figure of King Charles today, especially in the eyes of the ecological left. Outside of purely theoretical issues, Poundbury is an urban expansion of the town centre with the character of a private investment, rising on land owned by the prince and enacting new agricultural lands. The communal areas are managed by a management company to which all residents belong, and in addition, 35% of Poundbury is social housing.

All of this has an ambiguous relationship with the environmentalist ideas spouted by Carlo himself on various occasions, in public speeches, in his book Architecture and Environment and the in his 10 principles of urban design, as published in The Architectural Review. With the latter, Carlo states that he focuses on creating a sustainable future for the planet and not on architectural style: “We need to understand now how to create resilient, truly sustainable, human-scale urban environments that are spatially efficient, use low-carbon materials and are not so completely dependent on the car. (...) We need to reconnect with those traditional approaches and techniques honed over millennia that, only in the 20th century, were seen as ‘outdated’ and unnecessary in a progressive modern age. It is time to take a more mature view”. Words that outline a figure therefore determined to support the environmentalist cause, as evidenced by concrete actions such as the re-naturalisation of his properties in the Duchy of Cornwall, or the creation of organic crops at his Duchy Home Farm.

Scenery, facades, traditions, all concatenated as a formal and visual model of peaceful representation of society by Charles III, as in Balmoral Castle, which forms the backdrop for many official photographs of the royal family. A Scottish baronial Gothic revival style setting, as illusory and programmatic as a Venturi-Scott Brown project. Prince Albert bought the castle and demolished the previous building and completely rebuilt it in 1856. The replacement was the work of father-son architects John and William Smith (both Scottish). The setting of Balmoral is once again a visual system designed to visually convey a tradition that was embellished and probably invented, just as Hobsbawn and Ranger outline in The Invention of Tradition, referring to the Highland tradition of kilts, tartans and bagpipes.